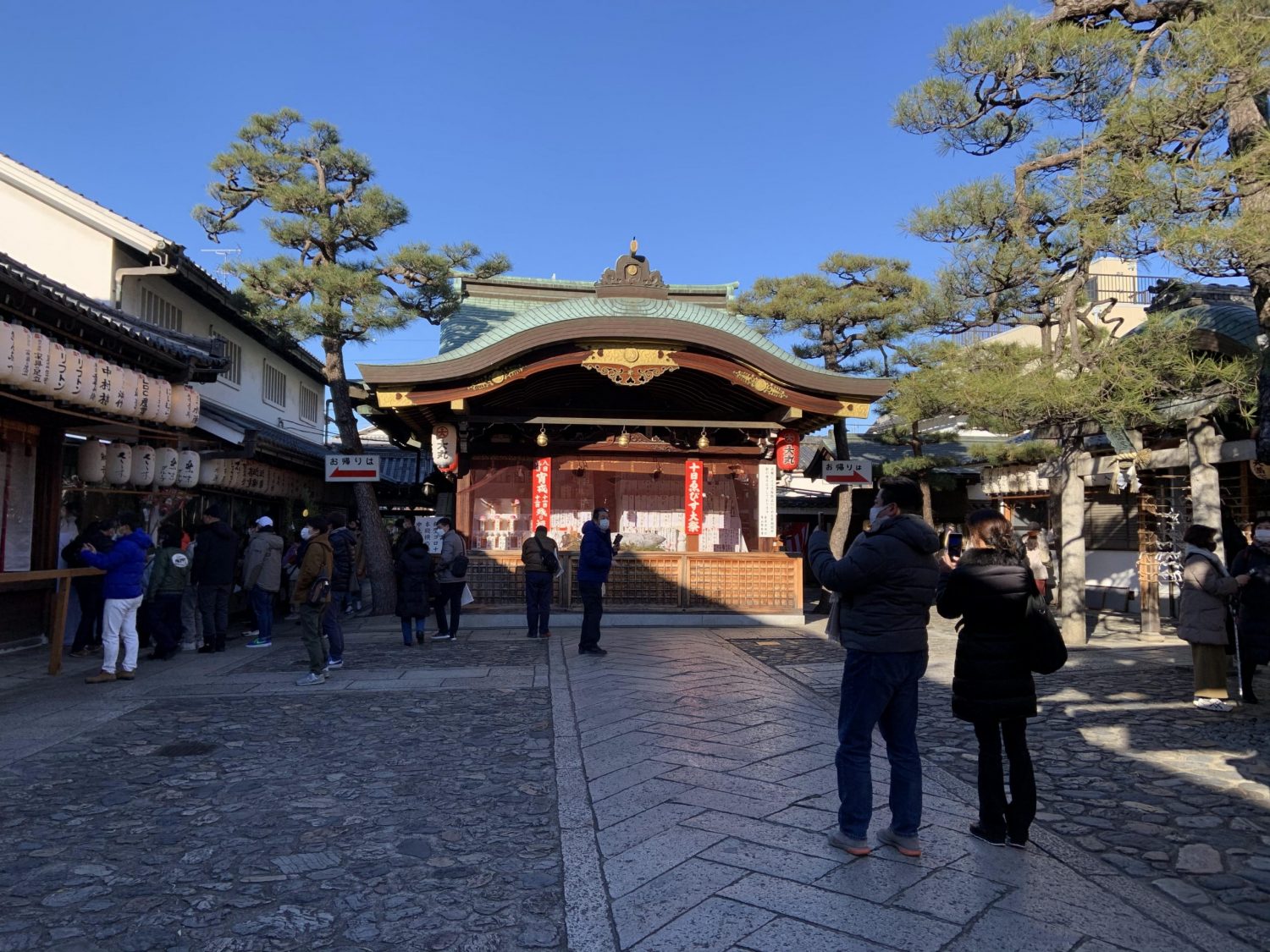 A group of casually dressed young men eagerly called out, “Alright, let’s do our best again this year!” After bowing in unison at the torii gate of the Kyoto Ebisu Jinja, they straightened back up with an air of satisfaction.

Before heading out, one of the men enthusiastically acknowledged to his friends, “Now it finally feels like the new year has officially begun.”

Known among locals as Ebissan, the Kyoto Ebisu Jinja starts every New Year with the Toka Ebisu festival from January 8-12.

During the festival, business owners gather at the shrine to pay their respects to Ebisu, one of the seven gods (shichifukujin) of good fortune and wealth. Ebisu is recognizable with his big smile, holding a fishing rod in one hand and a sea bream (tai) in the other.

Visitors, some stopping by alone, others with their fellow coworkers or families, can be seen carrying a fukuzasa, which is a lucky bamboo branch. The fukuzasa from the previous year is turned into the shrine and a fresh one is purchased, newly blessed by the shrine maiden (miko) through a kagura dance. Miniature charms such as a bright red, celebratory sea bream or a storehouse to gather and protect one’s luck and fortune are also purchased to decorate the fukuzasa.

This year’s Toka Ebisu festival in Kyoto canceled the majority of its yearly rituals that draw large crowds into the shrine grounds and surrounding neighborhood. This includes events such as the mochi pounding ritual, hoekago parade which displays colorful palanquins and performers, and yudate kagura ritual, where visitors get purified through the sprinkling of hot water.

The common phrase called out during the festival is “Shoubai hanjo de sasa motte koi!” which roughly translates to “Bring a bamboo branch for your business success!”

Without all the energetic bustle surrounding these events, what was the Toka Ebisu festival like in 2021?

Despite this year’s simpler, quiet version, a visit to the Toka Ebisu festival remains a must for business owners wishing to start off fresh in the New Year. Following a challenging year where many businesses struggled to thrive amid a pandemic, the visit may have carried extra hopes for good luck.


Through a Plastic Sheet: The Corona Version of Toka Ebisu Festival

Looking around, big white signs asking visitors to keep their masks on were noticeably placed throughout the shrine grounds.

A plastic sheet hung between the kagura stage and visitors, protecting both from any risk of infection while also obscuring the view of the dance. Additional plastic sheets were hung between all of the windows where the fukuzasa and their decorative charms were sold. Various shielding mechanisms that distance interactions as much as possible have become commonplace in public spaces, and the shrine is no exception.

Yet, for many business owners, a fukuzasa from Kyoto’s Ebissan is an important symbol of starting off the year strong, especially in the midst of many more uncertainties for the coming year.

Like every year, the shrine maiden was seen blessing the purchased fukuzasa through a kagura dance, twirling a few times with the sound of bells and a flute, before making a final, deep bow towards the altar.

Usually, visitors to the Toka Ebisu festival are not only limited to those from Kyoto, but also from Tokyo, and even all the way from Hokkaido. The shrine spokesperson shared, “This year, we have received calls from annual visitors living in other prefectures, asking if we can mail them a fukuzasa. This is something we usually do not do, but this year is an exception.”

According to a shrine spokesperson, this year’s Kyoto Toka Ebisu festival seems to have gathered only a fifth of the usual number of visitors.

“It’s definitely a lot fewer visitors than usual,” the spokesperson said as he looked around the shrine grounds which are usually packed with visitors eager to purchase a fukuzasa, each priced at ￥3500 yen. There is a steady flow, but only a sprinkle of visitors.

The official dates of Kyoto’s Toka Ebisu festival have wrapped up for the year, but in order to steady the flow of visitors amid the pandemic, the selling of fukuzasa, their decorations, and talismans such as ema and omamori continues until February 2. The shrine asks visitors to avoid crowding as much as possible.

“This year, we are continuing the selling of fukuzasa until Setsubun (February 2),” the spokesperson said. “Therefore, a lot of people aren’t gathering at once, but there is a steady flow and it actually feels like we are busier than usual throughout a longer period.”

Though less visitors are stopping by, good luck from Ebisu remains a staple for many.

After a period of calm, a trickle of visitors carrying in their dried fukuzasa from last year walked in while others approached the window to purchase a new fukuzasa. As the spokesperson shuffled off to help a couple with a purchase, an unusually quiet, and distanced ambiance of the Toka Ebisu festival drifted through the air.

Kyoto’s Ebissan dates back to the year 1202, completed in conjunction with the construction of the nearby Zen temple, Kennin-ji. Along with the Nishinomiya Ebisu Jinja in Hyogo and Imamiya Ebisu Jinja in Osaka, the Kyoto Ebisu Jinja is considered one of the Three Main Ebisu Shrines of Japan. It is believed that the Kyoto Ebisu Jinja is the starting point of the fukuzasa seen at other Ebisu shrines. The bamboo, known for its flexible, straight branches, and lush leaves that don’t easily fall off, became symbolic of family prosperity and business fortune.