Historical Repression Ushers in a New Dark Age in Russia 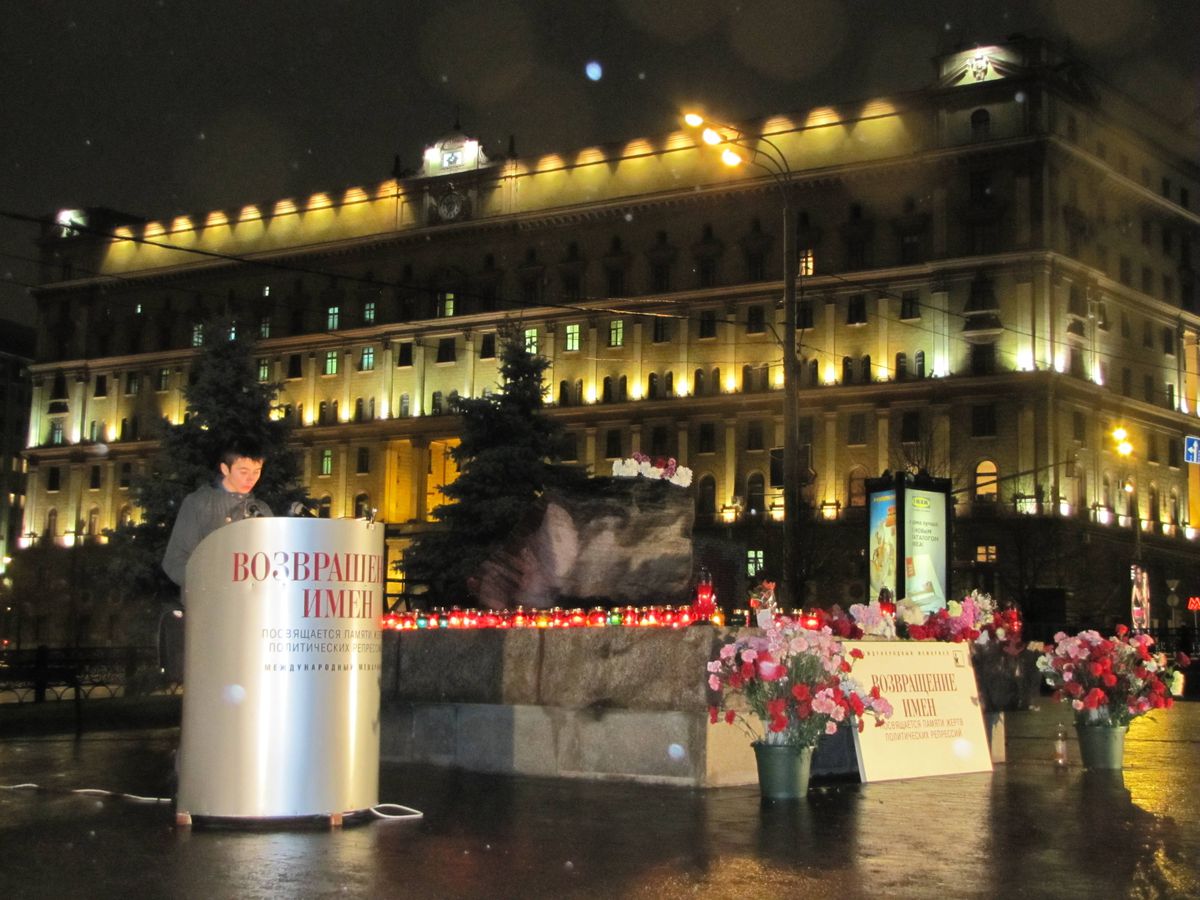 Every year on October 29, a solemn atmosphere envelops the square in front of the headquarters of the former Soviet Committee for State Security (KGB), now the Russian Federal Security Service (FSB), in Moscow.

From morning until late at night, a constant queue of people surround the “Solovetsky Stone” monument. Taking turns, men and women, young and old, brave the cold to stand before a microphone with pieces of paper in hand, reading the names, occupations, and dates of death of about 10 to 20 people each.

People choke up and weep as they read these names — the names of victims of Soviet political repression who were shot to death without good reason. All of these victims had relatives, friends, and a life ahead of them.

The organizer of this “Returning of Names” event is Memorial International, a long-standing Russian human rights group dedicated to the preservation of history. Nicknamed the “conscience of Russia,” Memorial has been nominated for the Nobel Peace Prize.

More than 700,000 people were shot dead between 1937 and 1938 alone, at the peak of the Great Purge led by Soviet dictator Joseph Stalin. A network of concentration camps was also set up across the country.

As its main activity to date, Memorial has unearthed information on victims from various documents and created a database aimed at passing on the history of this political repression.

In late December 2021, a Moscow court ordered Memorial to shut down. The Prosecutor-General’s Office, which petitioned for the closure, claimed that Memorial had “distorted” the history of the Soviet Union’s victory over Germany in World War II and spread a “false image of the Soviet Union as a terrorist state.”

The prosecution also claimed that Memorial’s activities were traitorous because the organization is funded by foreign sources.

Russia under the administration of Vladimir Putin has a law that regulates people and organizations receiving funding from other countries. They are designated as “foreign agents,” which is tantamount to calling them spies. Memorial is considered such an “agent.”

The ostensible reason for its closure is that it failed to comply with the regulations laid down by this law.

The essence of the matter, however, is that Memorial’s activities aimed at passing on historical truths have become unacceptable to the current regime, which is trying to erase the darker side of the Stalin era from history.

The Putin administration has adopted a view of history wherein the Soviet Union, one of the great victors of World War II that liberated Europe from fascism, came to this victory and its superpower status through Stalin’s leadership. Likewise, it has been propagating the idea that the West is trying to weaken Russia by rewriting history in an aim to bring the country into disrepute.

Following years of a stagnating economy, the government has no positive prospects to offer its people. It is merely trying to maintain a unifying force by serving as a “guardian of history.” Protecting the people’s understanding of history from “falsification” by the West was incorporated into Russia’s National Security Strategy, which was revised in July 2021.

Memorial was launched during the era of perestroika (“restructuring”) initiated by the Mikhail Gorbachev administration in the last years of the Soviet Union. Nobel Peace Prize laureate Andrei Sakharov was also involved in the organization’s establishment. In the course of glasnost policy on information disclosure, the dark side of the Stalin era was gradually exposed, becoming one of the driving forces behind the collapse of the Soviet Union.

The order to shut down Memorial International came in December 2021, the month that marked 30 years since the collapse of the Soviet Union. This is highly symbolic and signals the beginning of a new dark age where history is suppressed.