How to Become Hyper Productive at Home with a Daily Routine 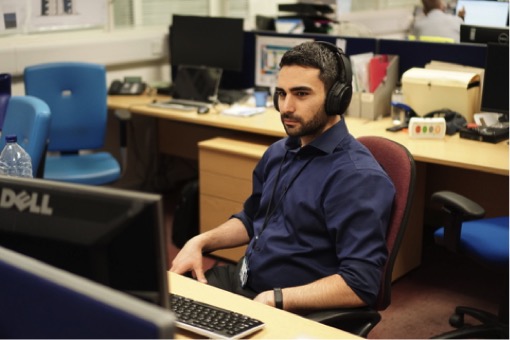 When the Japanese government first announced that Tokyo would be placed under a state of emergency, I felt that it wouldn’t be long before it was extended to cover all of Japan - including where I live in Fukushima.

Like many, I was worried about the situation in terms of both the spread of the virus and the thought of staying indoors for a long time. I was aware of how the lockdown in London was affecting my friends and family so I wanted to find a way to make the best use of the time that I would be spending at home.

The very night that the state of emergency was extended across Japan, I walked over to my whiteboard and started to map out my idea of what a productive daily routine at home would look like. What I put on the whiteboard that night continued to evolve, and as a result this past month has proven to be one of the most productive periods of my life.

Now that life is starting to return to normal however, I feel like I am re-joining society as a much-improved version of myself.

Before coming to Japan, I worked as a project manager in a London hospital where I learned about the importance of time management. At that time I would often be working on several projects at once, and before long I found that if I didn’t consciously assign time to a time to a given task, I probably wouldn’t find the time to do it. I brought this mentality with me to Japan, but never thought that it would help me during a worldwide pandemic.

Managing your time is an important skill and having some sort of routine will help immensely. Over the years I have used all kinds of diaries, calendars, and smartphone apps to manage my time. Yet the tool that I still gravitate to the most is a simple whiteboard. Inevitably, any kind of plan will change a lot as it starts to take shape. For me, the flexibility of a whiteboard makes it the perfect tool for mapping out ideas.

After much tweaking through trial and error, here is the routine that I used for the majority of April. 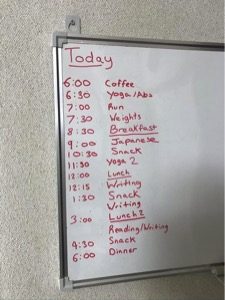 Your routine should reflect what’s most important to you. Over the past month, I’ve continuously made changes so that my routine became a reflection of my priorities.

Yoga is something that I really wanted to prioritize as it is truly a great way to wake the body up in the morning. A simple 15-minute Yoga routine can make a huge difference to your general wellbeing, as well as greatly improve your flexibility. Yoga has helped my body become a lot more agile, which in turn has helped me with my other activities, such as running and weightlifting.

Studying Japanese is something else that I really wanted to focus on during this time. Initially I would start studying first thing in the morning, but I soon found that though I was learning, my memory was not at its best this early. After experimenting with different times, I found that for me the best time for me to study was while eating breakfast, after my morning workout.

Planning all of my meal and snack times was also an important part of the routine, as I knew that overeating while at home was something that many people have had difficulty with. I found that what worked best for me was to have 4 balanced meals a day― every 3 hours― and a handful of almonds or cashew nuts as a snack between. This ensured that I never felt hungry, and at no point sensed a need to run to the cupboard to binge on something unhealthy.

Two Routines are Better than One

The first routine that I put together was working very well for me in all but one area - writing. By the time the afternoon came, I wasn’t in the mood to do anything creative. So, I decided to try a different approach. The next morning, I made writing the very first thing that I did, and to my surprise I found that the words just flowed. This then gave me the idea of having two routines so that I can prioritize different things on different days. 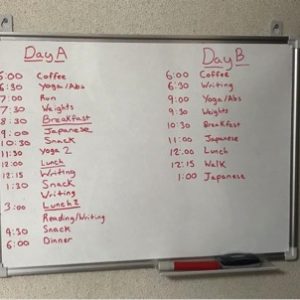 Though my routines have helped me maintain my sanity and productivity during this time, I have also found it to be important to give myself one free day where anything goes. I chose Saturday as my relaxation day, when I do no exercise (except maybe Yoga and some stretching), studying or writing. I even treat myself to a meal that’s a little less healthy than usual. I just allow both my mind and body to totally relax so that they are recharged to take on the week ahead.

It is important to acknowledge that there will be days when a routine will be impossible to stick to. Just know that this is ok! When the inevitable “off day” comes, it is important not to be disheartened and to get straight back on the horse as quickly as possible. Recently I came across the concept of the “2 Day Rule” in which you can take a day off but never 2 days off in a row for anything in your routine. This mindset has helped me ensure that missing a day doesn’t result in abandoning my routine.

At the time of writing, I am in the process of a phased return to work and my routine will have to be adapted yet again to fit in with my work life. For the past month, I have felt like I’m living on my own time zone. But if I'm honest, I have enjoyed every second of this time alone at home. I genuinely felt like I was achieving something every day and the best part is that I actually have something to show for it.

I have managed to gain quite a bit of muscle during this time, so I will certainly be ready for the Corona-free beach in 2021. Seeing this change in my body has given me the motivation that I need to continue working out and eating in exactly the same way, despite returning to work.

Also, my understanding of Japanese grammar has improved significantly, and I have already started using my new knowledge in the workplace. As for my writing, had I not introduced the second routine where I do my writing first thing in the morning, this article that you are reading now would never have been completed.

To close, I will leave you with the 3 main things that I have learned this month that hopefully can help you maximize your productivity, wherever you maybe.