How to Read Date Inscriptions on Japanese Swords 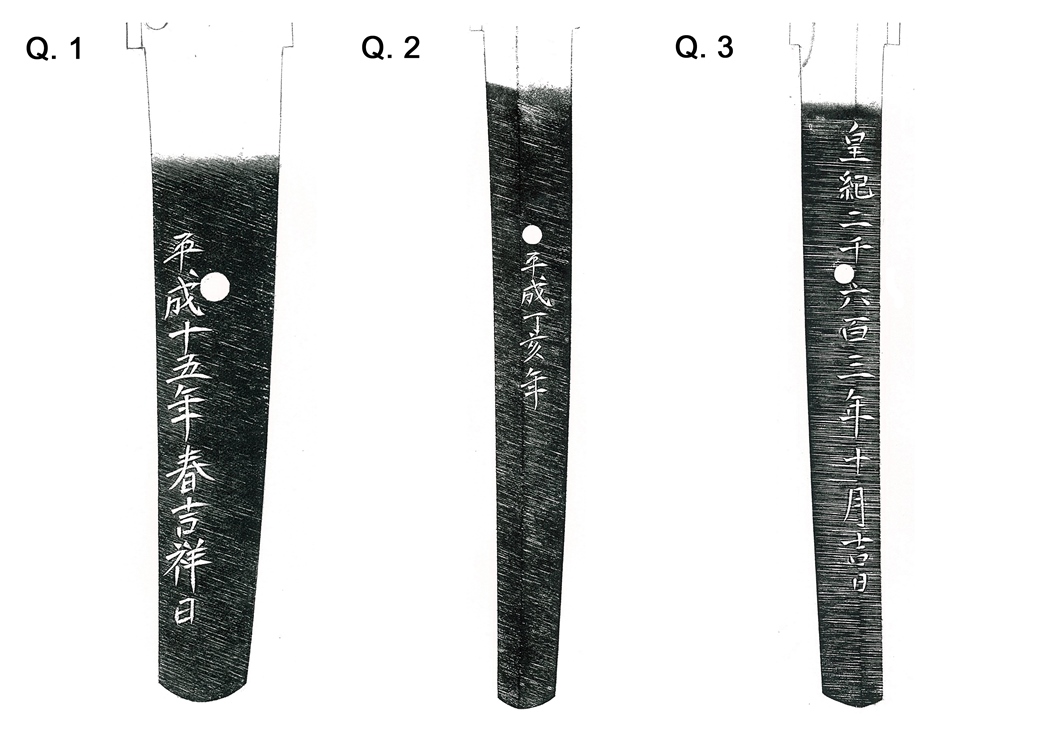 Before the implementation of the Gregorian calendar the Japanese used the lunisolar calendar. It wasn’t until the January 1, 1873 (Meiji 6), that Japan adopted the Gregorian solar calendar in order to bring themselves into alignment with the majority of the world. In order to do so, they had to skip almost a whole month. The day before  the 1st of January 1873 had been the second day of the 12th month, in the 5th year of Meiji. The western calendar equivalent of this would have been to go to bed on December 2, 1872, and the next day would have been January 1, 1873. This probably was not too difficult for the Japanese to deal with, as historically a leap month was added occasionally to ensure that the irregular months maintained alignment with the seasons.

Reading the date inscriptions is mostly straightforward. However, a few tools makes the task a little easier. First, there are three basic types of archaic Japanese dating to be considered. These are:

Nengo and eto are commonly used and even sometimes used together. Koki is based upon the timeline of the imperial lineage since the legendary founding date of Japan (660 BCE) by the first emperor Jimmu. The Koki dating system was not implemented until 1873 and is frequently seen on swords made during the World War II. However, this dating system was abandoned after the war.

Historically, nengo (era names) were decided by court officials and did not necessarily relate directly to the names of the ruling emperor of that period. The era names changed frequently due to superstitions and religious beliefs. It wasn’t until the ascension of Emperor Meiji in 1868 that Japan adopted a single era name to the life of a ruling emperor.

Below is a chart of the basic numbers used for days and months. There are some variations of some of the characters. In the case of the number four (四), it is pronounced “shi.” This is the same sound for the pronunciation for the character 死, which means “death.” Similarly, the character for nine (九) can be pronounced “ku,” which also invokes the idea of “kurushii,” or extreme pain. Therefore, inscriptions containing these two characters are often avoided and alternative characters are used instead. For example, the character for four will almost always be written as two two’s.

The basic numbers and their variants:

The Chinese sexangenary calendar of 12 animals, known in Japanese as Eto, is also referred to as ju-ni-shi (十二支). The 12 animals are used in combination with 10 stems to create a 60-year cyclical calendar.

There are also archaic names for the months that are rarely used, but can sometimes be seen in inscriptions, or on some sayagaki (inscriptions written on the surface of scabbards).

*Sometimes an additional month was added to maintain alignment with the seasons.

Here are some examples of date inscriptions on the tangs of Japanese swords, and their translations. 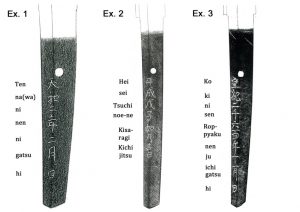 Heisei Tsuchinoe-ne Kisaragi Kichi jitsu: An auspicious day in the second month of the year of the Rat (2008), in the reign of Emperor Heisei (Akihito).

Using the information provided, try to read and translate the next three date inscriptions yourself. The correct answers will be given at the end of June’s article. Here is a link to a list of nengo to help you on your way. 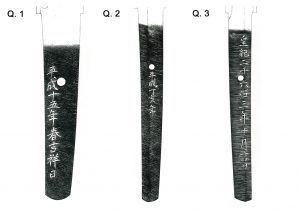