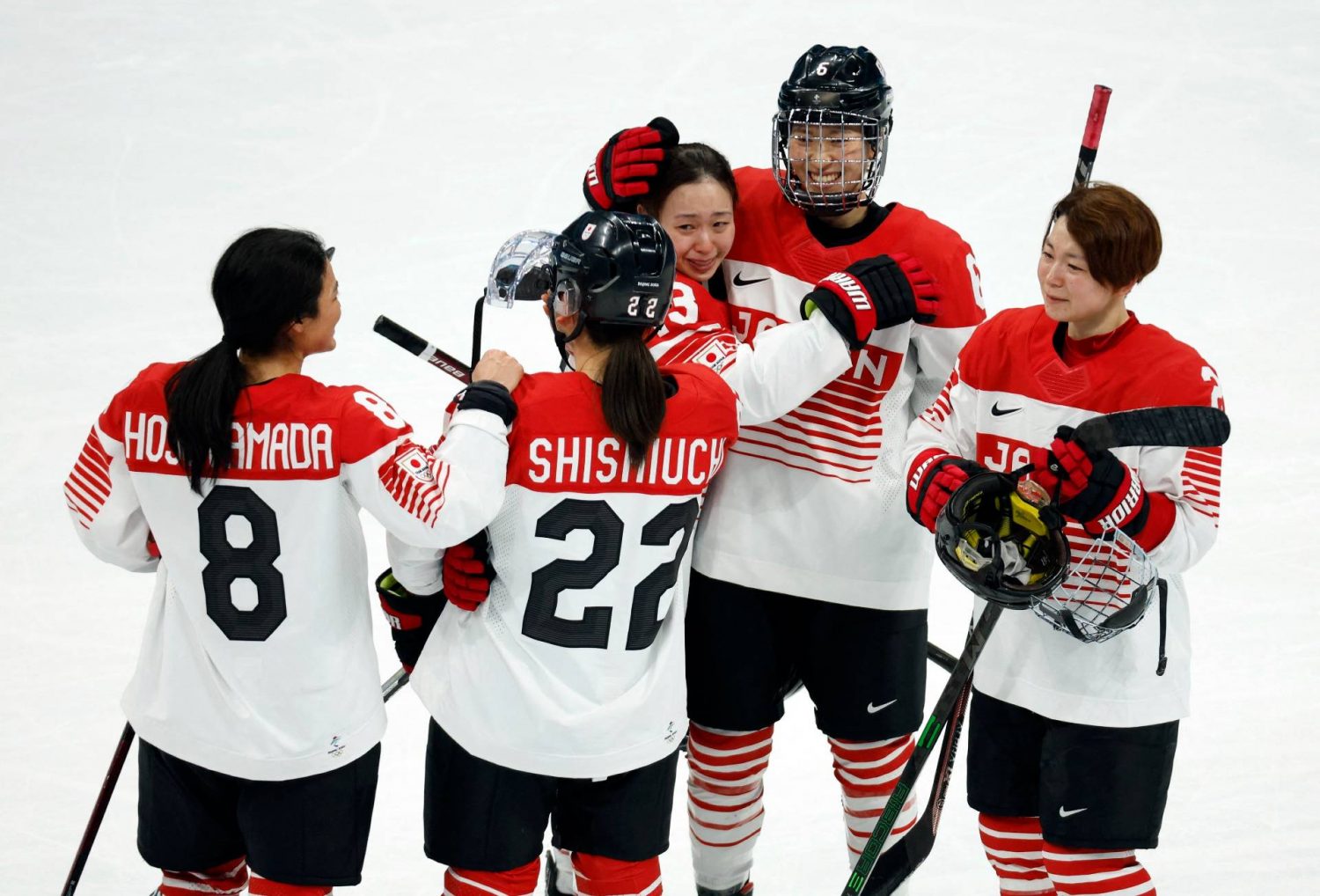 Smile Japan players console one another after their women's ice hockey quarterfinal defeat to Finland at the Beijing Olympics on February 12. (Jonathan Ernst/REUTERS)

Japan’s impressive run in the women’s ice hockey tournament at the Beijing Olympics came to an end on Saturday, February 12 after a 7-1 loss to reigning Olympic and world bronze medalist Finland in the quarterfinals.

Playing in the final round for the first time after topping Group B, Smile Japan kept it close at Wukesong Sports Centre in the first period against world No. 3 Finland.

Finland scored two quick goals in just over 2 minutes early in the first frame but Japan struck back when Akane Shiga feathered a shot between the legs of Finland goalie Anni Keisala with just under five minutes remaining in the opening period.

Buoyed by Shiga’s late goal, Japan came out strong in the second period and dominated the flow of play early. But a goal by Michelle Karvinen just over five minutes into the period shifted the momentum in Finland’s favor.

Petra Nieminen scored her second of three goals three-and-a-half minutes later to make it 4-1 and the rout was on.

Finland totally dominated Japan in the third. Nieminen completed her hat trick with a top-corner wrister over the shoulder of Japan goalie Nana Fujimoto just 18 seconds into the third.

Despite the loss, the Japanese women took big strides in the Beijing tournament with wins over Sweden, Denmark and the Czech Republic in the preliminary round.

Japan’s only loss of the preliminary round came in a 2-1 shootout decision against a Chinese team stocked with a healthy complement of North American imports.

“Finland was by no means an easy opponent but we had our chances,” Japan captain Chiho Osawa said. “I felt like If we could have taken advantage of those chances, we could have made it to the final four.”

Finland will next face defending champion the United States while Switzerland takes on world champion Canada.

Saturday’s game was also likely the last Olympic appearance for 39-year-old veteran Hanae Kubo who has been a stalwart on the Japanese national squad for over two decades.

“We didn’t get a medal and now it’s up to the next generation of players,” Kubo said. “I am not sure if I was able to give everything back to the team and my supporters but I’m so honored to have battled this far.”

Kubo made her first appearance with the national team at the 1999 Asian Winter Games.

She is the longest tenured player in team history and represented Japan at the 2014 and 2018 Olympics in addition to Beijing.

It was fitting that Kubo scored the game-winning goal in the shootout against the Czechs that sent Japan into the quarterfinals for the first time.