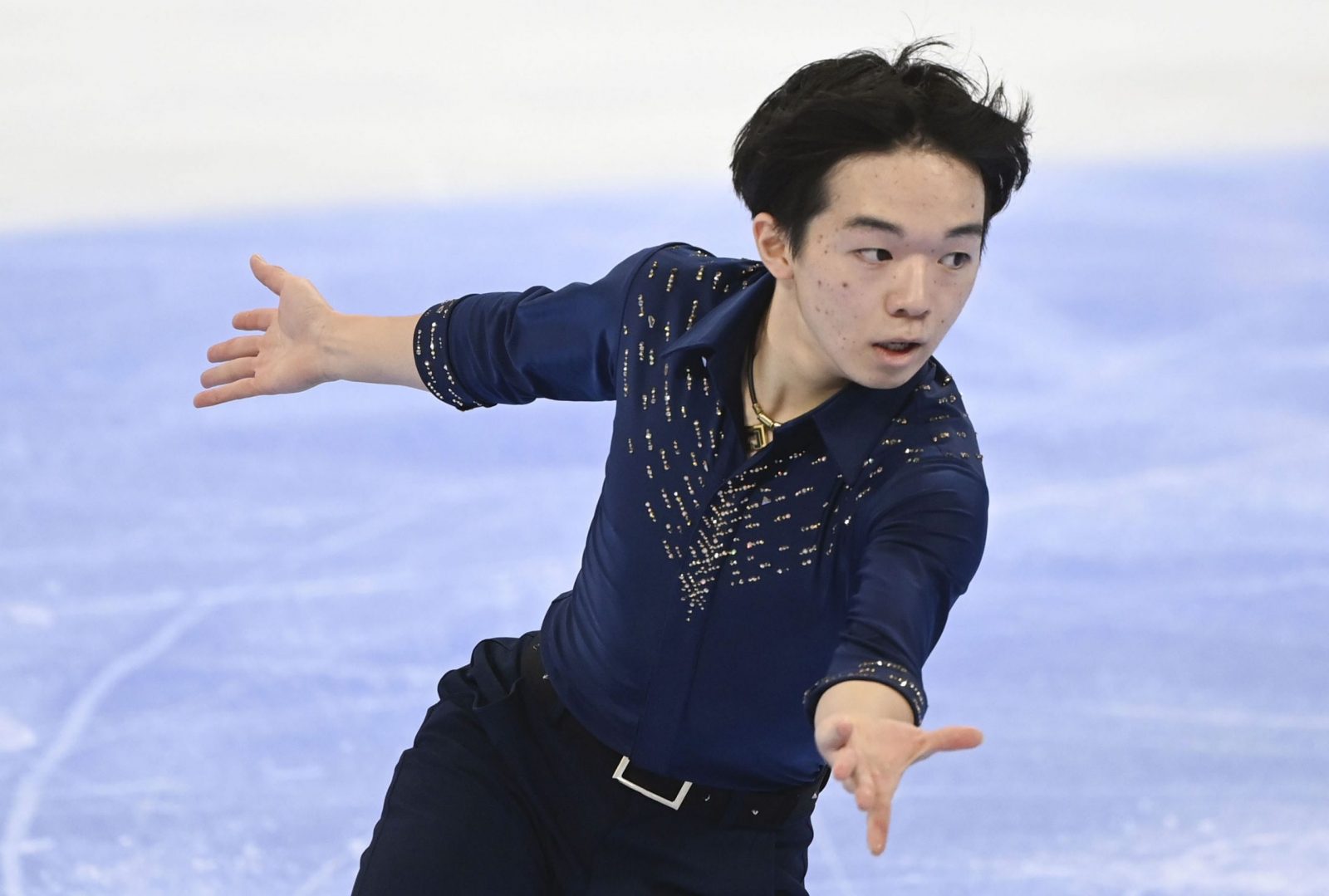 Yuma Kagiyama performs his short program at the Asian Open Trophy on October 14 in Beijing.

Yuma Kagiyama began his international season with a victory over compatriot Shun Sato at the Asian Open Trophy in Beijing on Friday, October 15.

The competition gave Kagiyama, last season’s world silver medalist, the chance to skate at the venue for the Beijing Olympics for the first time during the test event.

Kagiyama won with a total score of 277.78 points, besting Sato (256.16) by more than 20 points, despite struggling in his free skate to the music from “Gladiator.”

The Challenger Series event did not have a formidable field but was still beneficial to those who competed. China’s Boyang Jin (224.09) finished third on home ice at Capital Indoor Stadium.

The 18-year-old Kagiyama stepped out on the landing of his opening quadruple loop, then fell on his ensuing quad salchow.

Kagiyama, the 2020 Youth Olympics champion, recovered to land a nice quad toe loop/triple toe loop combination, but was shaky again on another quad toe loop later in the program.

With all of the variables that skaters have had to deal with during the pandemic, it was a respectable start for Kagiyama, who is the favorite to fill the third spot on the Olympic team behind Yuzuru Hanyu and Shoma Uno.

Kagiyama knows he will have to step up his game in the coming months if he is going to make the podium at the biggest skating event there is.

“If you look at it comprehensively, there were a lot of issues,” Kagiyama was quoted as saying by Kyodo News. “I’ve added a new quad loop to my free program from this season, and I want to improve to the point that even if I mess up the quad loop, I’ll still do a good job on my other quad jumps.”

Ice Time believes that with the consistency he has displayed over the past two seasons, he can do it. Being coached by his father Masakazu, a two-time Olympian, will continue to be a big asset for Kagiyama.

Mai Mihara edged her best friend by just over one point to take the women’s crown in Beijing. Mihara won with a tally of 203.58, while Kaori Sakamoto scored 202.28 after leading following the short program.

The 22-year-old Mihara competed to “Fairy of the Forest” and moved through her free skate nearly flawlessly, landing six triples and earning level fours on her spins and step sequence. The only blemish came when she doubled a planned triple loop on the final jump in the program.

“From start to finish I skated without losing my concentration, although I want to improve my accuracy on each jump,” Mihara stated, according to Kyodo News.

Sakamoto, considered a lock to make the Olympic team, under-rotated her triple salchow and then fell on her triple axel in her free skate to “No More Fight Left In Me” to drop from first place after the short program.

“My lack of physical strength was noticeable in my performance,” Sakamoto commented. “This program demands greater aerobic capacity. Besides extensive running and other things outside practice, I have to find a way to skate strong right until the end.”

The senior Grand Prix season gets underway this week at Skate America in Las Vegas, where reigning world champion Nathan Chen will begin his Olympic campaign against a field that includes Shoma Uno, the Pyeongchang silver medalist, and Sato.

Satoko Miyahara, who came in fourth in Pyeongchang, will skate for the Hinomaru in Nevada along with Sakamoto and Yuhana Yokoi.

The women’s lineup for Skate America is deep and includes sensational Russian Alexandra Trusova and South Korean You Young. Two-time U.S. champion Bradie Tennell withdrew from the event due to a lingering foot injury.

Trusova recently revealed that she will attempt to do five quads in her free skate at all competitions this season after doing it at the senior Russian test skates in Chelyabinsk last month.

“This year, I decided to jump five quads from the very beginning and always skate with such content,” Trusova told the Koroche podcast in comments translated by fs-gossips.com. “So almost immediately after a vacation I started jumping quads in order to prepare in time. And I hope this was not the only time when I was able to do five quads, I hope that I will succeed at other competitions.”

Japan’s team of Misato Komatsubara and Tim Koleto are on the roster for the ice dance competition, which includes world silver medalists Madison Hubbell and Zachary Donohue of the U.S.

The International Skating Union has given Japan one wild card spot for each discipline for the Junior Grand Prix Final in Osaka in December, it was revealed recently.

While this is a nice gesture for the Japanese fans who will be attending the event, one has to wonder about the fairness in it.

The Japan Skating Federation refused to send any skaters to the Junior Grand Prix despite the fact that 59 other countries did so this season.

It is not a good look to all of the other nations when Japan is given places in the prestigious JGP Final just because it is hosting the event.

The JGP Final normally features the top six skaters in each discipline, based on their finishes during the JGP season. But the standings were altered this season due to issues related to the pandemic. Essentially most of the skaters that won events made the JGP Final.

But Ice Time wonders how those who just missed out will feel when they see skaters who didn’t even compete during the regular campaign on the ice in Osaka.

The 2022 Four Continents Championships, originally scheduled to be held in Tianjin, China, has been moved to Tallinn, Estonia, where they will take place the week following the European Championships.

The ISU was in a difficult position after China had to withdraw as host over concerns related to the ongoing pandemic. When no other nations stepped forward with an offer to host the Four Continents, the ISU approached the Estonian federation about helping out, and it agreed.

Two-time national champion Rika Kihira, Japan’s best female hope for a medal at the Beijing Olympics, has withdrawn from her opening Grand Prix assignment due to injury.

Kihira is suffering from an osteochondral injury to her right ankle that she first hurt in July and won’t participate at Skate Canada next week in Vancouver, the JSF announced on Tuesday, October 19.

The 19-year-old Kihira is still scheduled to compete at the NHK Trophy next month in Tokyo.

The timing of Kihira’s withdrawal is most unfortunate, as it means she will miss the Grand Prix Final in Osaka in December, unless she somehow recovers to replace another Japanese skater in a later GP this season.