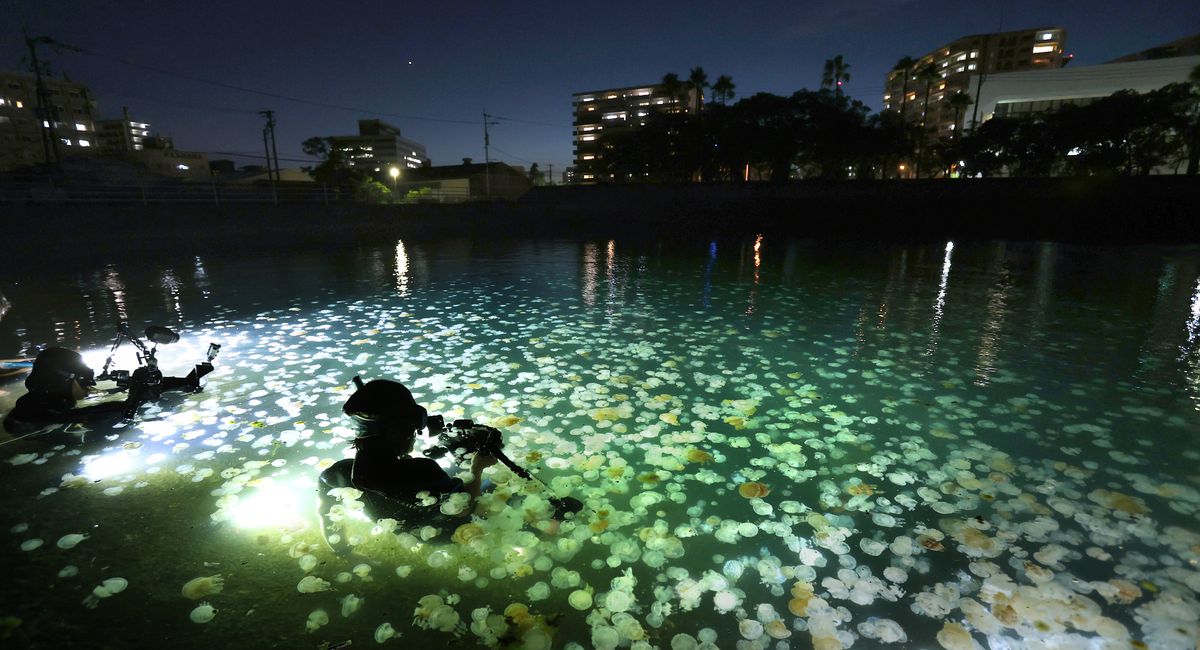 In a corner of Kinko Bay overlooking Sakurajima, Kagoshima symbol’s in the southernmost point of Kyūshū, there is a place that becomes a paradise for jellyfish from late Summer to early Autumn.

It is the Yojirougahama waterway, which is about 60 meters wide and 1.6 kilometers long. It was constructed to protect the landfilled coastal area from high tides.

When night falls and the darkened water surface is illuminated from below, a mysterious sight emerges: a group of spotted jelly, or Mastigias papua, with translucent brown umbrellas less than 10 cm in diameter, are floating in the water. There might have been hundreds of them.

From a distance, the water looked like a flower raft where the cherry blossom petals have scattered in the wind at the end of Spring.

Seen closer, you realize they are spotted jellyfish reacting to the light, swimming, as they open and close their bell-shaped body. The Plankton is so abundant that the water looks white and hazy.

What seems like a “jellyfish raft” is in fact a gathering of the spotted jellyfish with their tentacles stretched out to prey on the aquatic organisms.

Kinko Bay has a wide variety of jellyfish, but it is not always easy to observe a large number of them floating together. These events depend upon favorable conditions, including the time of day and strength of the waves.

Koji Matsuda (35), who works as a guide at a local diving shop, was one of the first to spot the phenomenon. “When I was diving to check out the waterway at night, by chance I noticed jellyfish gathering in the light.” He saw the potential for a tour, and immediately organized Kurage night (jellyfish night) from his shop so snorkeling customers could see the long waterway at night.

Every time he plans a tour, he submits a notice to the local government seeking guidance.

This time, I put on a wet suit and took part in the tour. I tried swimming with a spotted jellyfish. In the water, the abundance of plankton made it seem like it was snowing. Countless spotted jellyfish floated freely with their pink or light blue bells spread out like flowers. It was a fantasy world to see their floating figures tilting their translucent bodies in the light.

The richness of Kinko Bay’s natural environment, overlapping with the artificially created space separating it from the waves outside the break, has created a perfect environment for spotted jellyfish. By throwing light on it, we were able to see a secret landscape that no one had ever seen before.