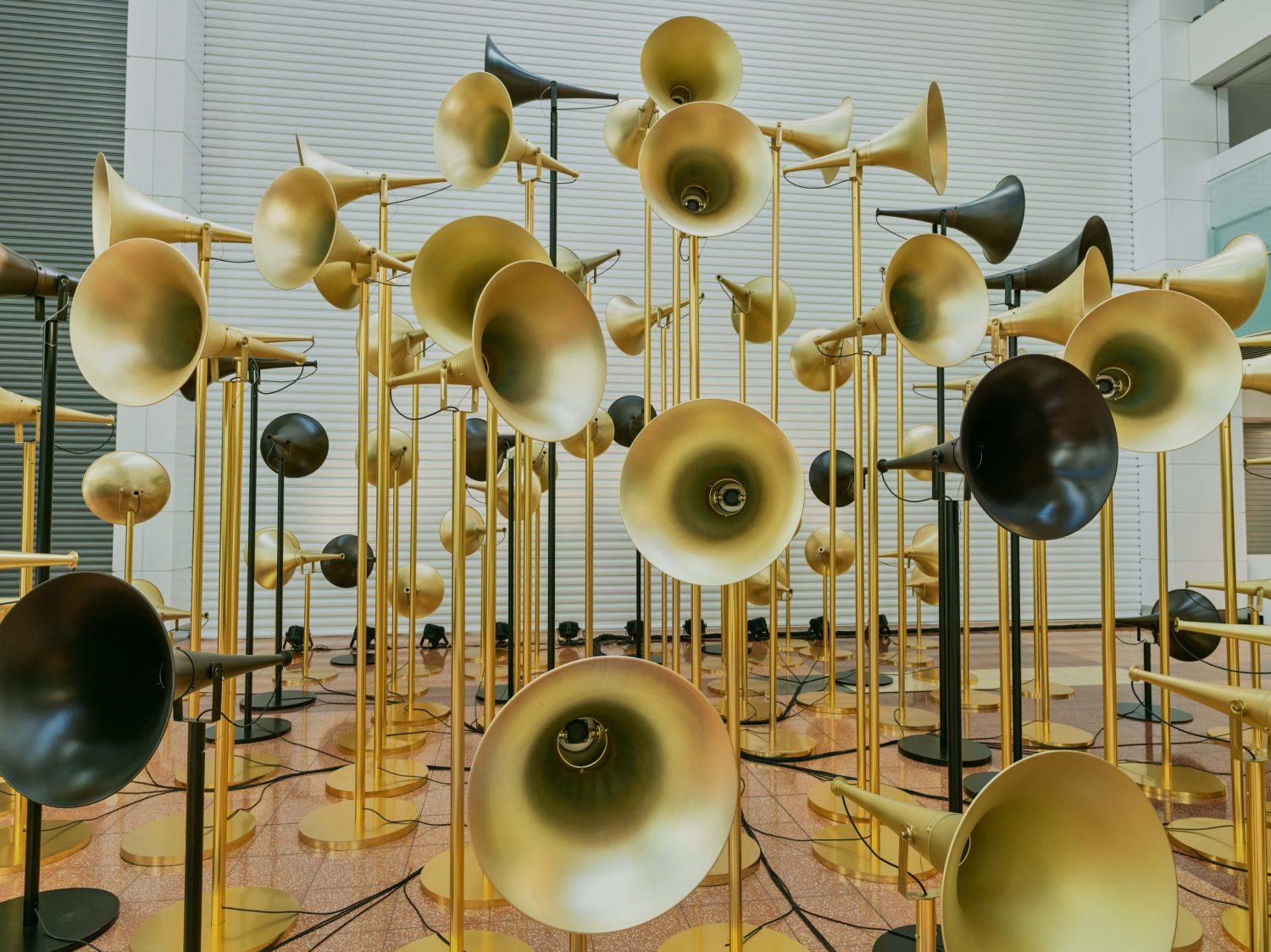 On any given day, a traveller walking inside Terminal 2 of the Tokyo Haneda Airport will hear a soothing sound from the end of the corridor.

There, near the All Nippon Airways desk, sits a curious installation. Sixty-eight large horns mounted on poles of various lengths, colored in three different shades of brass, are displayed in a semi-circle. Draw closer, and you will realize the horns emanate a soft, full sound, which transports the listener to a faraway place. The sound almost makes you feel like you are floating on a cloud.

The project is curated by Paola Antonelli of the New York Modern Museum of Modern Art (MOMA).

How did this installation come to be? It’s part of what Japan is doing to make airports a stage for its art and culture.

The first question that might come to mind is: Of all places, why have art installations in an airport?

After all, one might think that the condition of just rolling off a plane in a semi-conscious state after a long flight is not conducive to appreciating art.

Curator Antonelli, who has traveled extensively in and out of Japan and worked with many Japanese artists, illustrated how landing in a country is a particular moment.

“There’s that feeling of moodiness, at the same time tired but also a heightened perception. There is the expectation of something new that one doesn’t know yet. It’s a moment of absolute receptiveness. It’s a moment where a curator and art piece can really convey a message in almost a subliminal way,” she said in a June 23 press conference.

For that reason, Antonelli continued: “It (the art) has to have the same kind of wavelength. It cannot be something just declarative. That’s why we decided to work with sound.”

The Concept Behind the Art

The process of setting up art in an airport in general is one which is far from easy. As Haneda Future Research Institute arts and culture director Reiri Kojima explained, safety concerns mean the rules for having objects displayed are particularly strict. Position and the potential risk of earthquakes and natural disasters have to be considered.

The original idea of hundreds of horns all around the airport was sized down to 68, at the end of the corridor. Yet, don’t let this adjustment fool you.

The balance is remarkable. The sound is soothing but not overpowering, designed not to override the announcements in the background.

The technology was designed by Miyu Hosoi, who used her voice as the core sound, enunciating in the Japanese alphabet. The distilled sounds are then conveyed through the harmony of the different horns.

Yuri Suzuki explained how the idea was to strip down the sound of Japanese language then rearrange it, with the aim to make “sounds like a language which could be accessed all over the world.”

The aesthetic also has an element of balance. The pervasive elegant brass color is juxtaposed against some horns enameled in black.

It turns out the choice of color derived from a desire to showcase one of Japan’s traditional arts: maki-e. This is the art of using powders derived from different metals to decorate objects, most commonly lacquerware. Therefore, the whole artwork alludes to that through the choice of gold and black.

Hosoi explained how she approached craftsmen of Takaoka in Toyama prefecture, a region which has more than 1,440 years of history in layer craftsmanship, to get inspiration of what color could be achieved with the different metal powders.

Suzuki concluded, “I think the color choice is a perfect balance of the not too cliché, and that we managed to show a traditional feeling of Japan as well.”

And, perhaps, what is most striking is the display and shape of the horns themselves. They are grouped together, almost like a cluster. As Antonelli put it: “[The installation] is still doing what human beings cannot do, which is getting together in a crowd and just standing next to each other. It’s a very poetic and beautiful installation that I’m very proud will stay up for a few months.”

What might appear to be just one art installation is actually the cumulation of an initiative in collaboration with the Agency for Cultural Affairs of Japan. It is part of “VISION GATE,” a wider idea of using airports as a showcase for Japanese art.

The results amount to another six short videos, each one minute in length, with no sound, showcased at both Haneda and Narita airports. They feature Japanese artists who have gained attention worldwide: acky bright, Jun Inoue, Sachiko Kodama, PARTY, Monika Mogi, and Mariko Mori.

“Tokyo has a foot in the past and the rest of the body that’s projected into the future,” explained Antonelli. “And when a tourist arrives in Japan, going through the [arrivals] gate, one is transported through almost like a time-space warp, and that’s what we wanted to really convey.”

She continued, “What the team wanted to achieve is to give a sense of how clichés of Japan are still alive, but at the same time there is an evolution.”

PARTY uses modified satellite images blended together with strong gold edges to recall the theme of kin-tsugi, the art of mending objects using gold, to show that earth can be mended by the kin-tsugi of the will of humankind.

Haneda Future Research Institute senior managing director Tetsuya Kawabe explained how all these are part of a wider project of changing the image of Japan as a center of art: “Everybody thinks that the Haneda is a place for just passing through, not staying. We have to change, we have to grow the value of Haneda airport and its neighbors in the short term.”

He continued, “Then, in the long-term, what we have to do is increase the value of Japan as one of the countries with the richest history, richest culture, and the richest art in the world.”

The Crowd Cloud installation at Haneda, together with the videos shown both at Haneda and Narita, have been in place since February 27. They will be in place until September 2021.

To find out more about the umbrella project CULTURE GATE to JAPAN, click here.