Insights from Tatsuma Sakai, One of the World’s Biggest Ukiyo-e Collectors 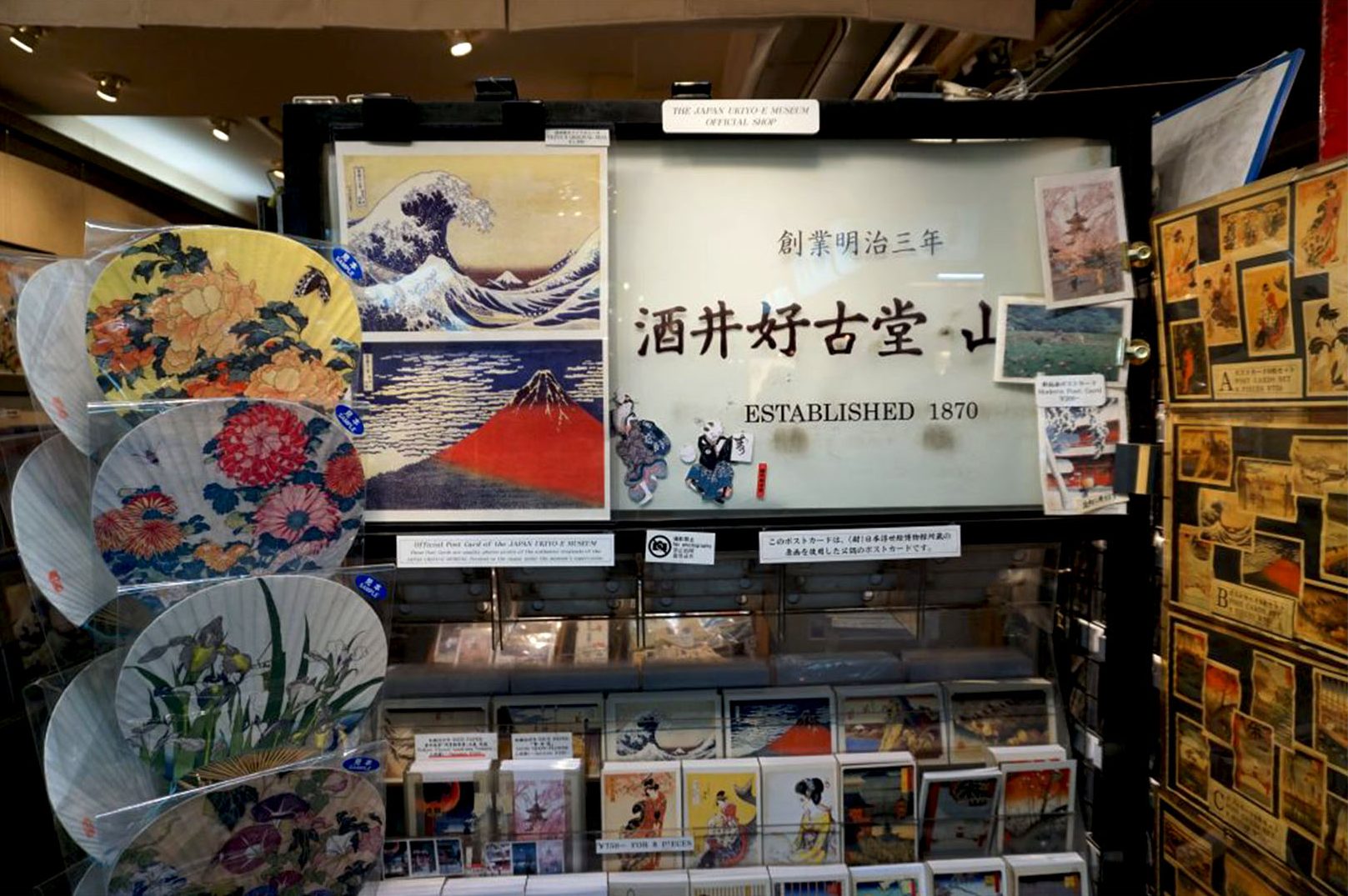 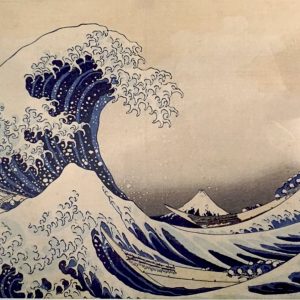 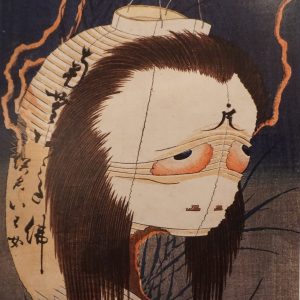 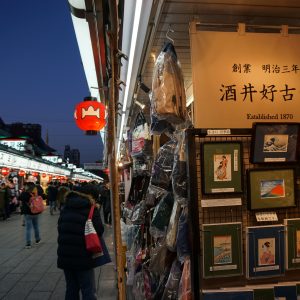 Ukiyo-e has a very specific kind of aura to it. Because of its long history and beauty, it is often seen as something inaccessible.

Yet one might be surprised: smack in the middle of Nakamise, the alley of shops in front of Sensoji Temple (Asakusa, Tokyo), sits a small corner shop called Sakai Kokodo Yamafuji.

If you don’t look twice, you might think this is just one of the many souvenir shops down this alley. Enter and you will find, however, that the pictures there are original ukiyo-e, and the owner has long dealt with collections of the beautiful art pieces.

JAPAN Forward met one of the holders of what is known as the biggest ukiyo-e collection in the world, the shop owner of Sakai Kokodo Yamafuji, Tatsuma Sakai. He, together with his brothers Ganko and Kunio, recently contributed some of their collection to a ukiyo-e exhibition at the Mori Arts Gallery, which is ongoing until March 24.

Tatsuma Sakai talked about his family, what is interesting about ukiyo-e, and what can be done for the further understanding of ukiyo-e art around the world.

Upon entering the shop, it was clear that the owner was not your regular shop assistant. Sporting matching patterned top and bottom outfit, which looked like it could have been cut from kimono fabric, he was soft-spoken but had a twinkle in his eye.

When asked how this all started, Tatsuma Sakai explained how it all goes back five generations.

“My great grandfather, a businessman, was from Matsumoto. Many artists would come to see him, leaving ukiyo-e as presents. He then started collecting them,” he said.

Hence, by the end of the 1700s, the Sakai family had begun collecting this art, and that was how, later on, the greats Katsushika Hokusai and Utagawa Hiroshige found themselves in the small town of Matsumoto in Nagano Prefecture.

Since then, different generations have added to the collection. The family’s relationship to the art form was highlighted two generations later when, in the mid-19th century, Sakai ancestor Yoshitaka Rihei was painted by Hiroshige in the portrait called Hyaku-nin Isshu Shousei Shou.

It was three generations ago in 1870 that Touyoue Sakai established the first Sakai Kokodo in Kanda Awajicho in Tokyo. The generation of Tatsuma Sakai’s father, in particular, helped expand the collection to more than 100,000 pieces.

Our host explained the difficulties in collecting the pieces and the importance of interaction with scholars who are capable of identifying the good artwork: “We were once approached by the ukiyo-e expert Juzo Susuki, and he was the one who saw that we had several pieces of the series of the 53 Stations of the Tokaido. So he said, ‘You need to collect them all, and the collection took two years to compile.”

It is thanks to experts like these that the collection has grown and holds incredible appeal for exhibitions in Japan and abroad.

The richness of the family’s collection also prompted Tatsuma’s father and his generation to establish the first ukiyo-e museum in 1982, in the city where it all began: Matsumoto.

Tatsuma Sakai’s main occupation is managing the two shops in Asakusa with his wife Naoko. His second son, 31-year-old Koji Sakai, is in Matsumoto, managing the family’s ukiyo-e museum. His brothers, Ganko and Kunio, curate the Sakai Kokodo Gallery in Yurakucho.

Of course, art for its own sake is one thing, but how much do people truly know about ukiyo-e outside Japan?

Because the shop is situated in Asakusa, one of the biggest tourist locations in Tokyo, foreign customers were coming and going while we sat and talked. As one couple curiously peered through the prints on display, Sakai smiled and said, “The most interesting part is always seeing the reaction of people.”

When asked what is the most unusual response he had ever gotten from a client regarding ukiyo-e, he stopped and thought for a moment. “For example, when people ask me, ‘What is the meaning of this?’ I am always a bit stumped,” he said, laughing. “But that is where the exhibitions come in. The best way to make people understand is to have them go and see for themselves.”

It seems that the Sakai family has certainly had their fair share of exhibitions at home and abroad. Tatsuma showed me a book, which catalogued their exhibitions abroad up to 2007. It was a list which included 58 locations around the Middle East, North and South America, Europe, and Asia. Not just cities like Paris and Moscow, but also Haifa, Taipei, and others jumped out at me. The list went on, and our host said happily, “The list was too long — we stopped counting.”

Just in 2017, the Sakai family was the main contributor to the first Hokusai exhibition in Australia. “It was a huge success, they had never had that sort of exhibition before. It was so popular they asked us to extend it by a week.”

Yet our host didn’t hide that there is always a lot at stake when taking works abroad. “One always worries about, ‘What happens if there is an accident?’ So, no matter what happens, we always split the works in two batches when we send them abroad.”

Apart from the exhibitions, there have also been workshops — especially in the United States — so that people can learn to better understand the process of woodblock artwork.

Tatsuma Sakai explained that many people now know the basic idea behind woodblock printing, but there will also be many people who haven’t heard of it at all. He continued: “How do you convey the idea of woodblock print? The easiest way is just to have workshops and show people — how the woodblock is carved, how the design is drawn, and how the colors are added later.”

He also stressed that one key feature of ukiyo-e is washi, the characteristic Japanese paper. The particular variety which is used in ukiyo-e is called echizen hosho.

“That is the main difference from regular prints, and the main reason why the color in ukiyo-e doesn’t really fade even after many years, it just becomes softer,” he said.

He also shared the fun fact that Japanese paper money is made from washi, which explains how this kind of paper is renowned for its durability.

The Future of Ukiyo-e

Throughout the conversation, I was touched by how, even after five generations, this man talked about the woodblock prints as if they were his friends.

It came out especially when he talked about ukiyo-e and Japanese culture. “I think, to some extent, Japanese have a sense for the craft. If you think of the skill that goes into carving — not just woodblock, but before there used to be a long tradition of carving ivory — I have high hopes that this sort of craft will not disappear,” he said.

He was also optimistic that the value of ukiyo-e wouldn’t go down. “If anything, valuable pieces are becoming rarer, so the value of the pieces I think is only going to increase.”

In terms of future exhibitions for the Sakai collection, the current exhibition at the Mori Arts Center Gallery runs until March 24 with the support of Nikkei Newspaper. The other major project in the planning stages will take place in the year of the Tokyo Olympics. According to Tatsuma Sakai, it promises to be very special: “There are plans to hold an exhibition of the three main collectors in Japan.”

What does the future have in store for the Sakai family itself? In some ways, it seems the times are changing, not just for ukiyo-e but also for the family that collects them. His elder son, it turns out, is the first in six generations who hasn’t immediately taken up work in the ukiyo-e business. Instead, he is a banker.

Tatsuma Sakai was sanguine when asked how he felt about this. It seemed that he wasn’t reluctant to see how things would change. “If he wants to, he can always quit and join later on” he said stoically.

Perhaps that was the best approach with something as old as ukiyo-e as well: see where the new wave will take this aspect of Japanese culture,  and just embrace it.

The original meaning of ukiyo, “melancholy,” came to signify the art of the floating world. It reflects the buoyant and fun-loving quality of the people during the Edo period and the pleasures of the common man, such as kabuki plays and geisha.

The forerunner of Edo period prints were drawings which developed into woodblock prints to satisfy the growth in demand. The printmaking was composed of labor divided among many craftsmen, including painters, engravers, and printers, and it requires at least the same number of different woodblocks as there are colors — often more than 20. Great exponents of this art, such as Katsushika Hokusai and Utagawa Hiroshige, greatly influenced the world, for example, through the current of Japonism. Ukiyo-e is generally a cherished cultural heritage valued around the world to this day.

It is commonly known that Katsushika Hokusai’s Great Kanagawa Wave and the 36 Views of Mt. Fuji, influenced artists in the 19th century in the wave of Japonism; however this is but a fraction of works which Hokusai produced over a fruitful 70-year career.

Combining collections from all over Japan and the world, this exhibition includes pieces which have just been discovered or are for the first time being shown in public. The 480 pieces on display are divided into six periods, reflecting Hokusai’s creative development over his life.

A main feature of this exhibition is the fact that it’s based on the collection of Seiji Nagata, a major researcher on Hokusai ukiyo-e, who collected more than 2,000 pieces. In 2017, a year before passing away, Nagata expressed his wish to have works from his collection displayed at this exhibition, and afterwards have them donated to a permanent collection in Shimane Prefecture, his home prefecture. This will be the last chance to see the Nagata collection in Tokyo, making it a very special exhibition.

Over his 70-year career until the age of 90, Hokusai constantly sought to update himself and the style which he was portraying. Nagata, by constantly unveiling never-before-displayed works, was a great advocate of Hokusai as a major innovator and helped foster a better understanding of this artist with a 170-year legacy. In this spirit, the exhibition takes the name of “Hokusai Updated.” 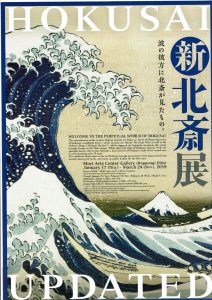 More information on the Hokusai Updated can be found here.

More information on the The Japan Ukiyo-e Museum in Matsumoto can be found here.

Information about the Sakai Kokodo Gallery in Yurakucho may be found here.