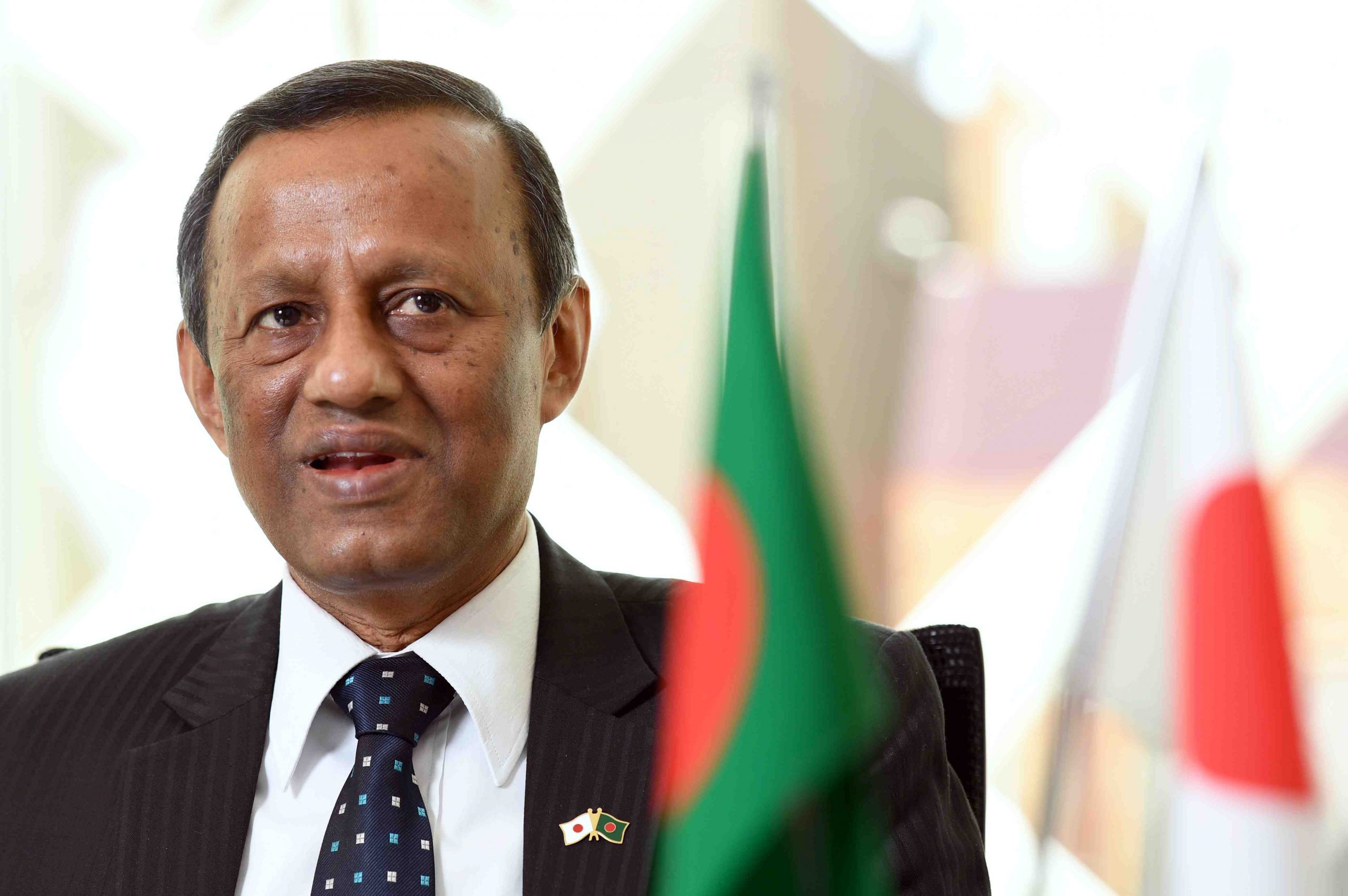 Fifty years ago on March 26, Bangladesh gained independence from Pakistan. Since then, the country has evolved from among the poorest nations in the world to one of the brightest developing countries and a key bilateral trade partner for Japan.

To mark this golden anniversary, JAPAN Forward sat down with the Bangladesh Ambassador to Japan, Shahabuddin Ahmed, to talk about his country’s 50 years of growth and development, and his high expectations for continuing cooperation with Japan.

As Japanese industry continues its pivot away from China, the warm bilateral relationship between Tokyo and Dhaka has generated economic benefits for both countries. We asked the ambassador for his views on contemporary Japan-Bangladesh relations.

Bangladesh and Japan are said to share a close bond of friendship. What makes the two countries so close?

Our friendship has evolved over centuries, predating present-day Bangladesh. Our two peoples share a similar history and traditions that are deeply rooted in values of people, family, society, and culture. The flags of our two countries are also similar in design and unique on the world stage.

Similarly, the people of Bangladesh hold immense goodwill and respect for Japan, particularly as a model for development. Japan recognized independent Bangladesh on February 10, 1972, and was therefore one of the first countries to establish diplomatic relations.

The visit of the Father of our Nation, Bangabandhu Sheikh Mujibur Rahman, to Japan in October 1973 laid the rock-solid foundation of our enduring bilateral relations. We were then honored by the visit of Their Majesties, the then-Crown Prince Akihito and Crown Princess Michiko (now Emperor Emeritus and Empress Emerita of Japan) to Bangladesh in February 1975, which again added great momentum to our friendship and the spirit of cooperation.

In recent times, we have continued to see frequent high-level visits exchanged between the two countries. On one such exchange between Prime Minister [Sheikh] Hasina and former Prime Minister [Shinzo] Abe in 2014, our relationship was elevated to one of a “comprehensive partnership.”


In 2014, the Japanese government committed ￥600 billion JPY ($5.7 billion USD) in aid and infrastructure projects to Bangladesh, implemented over the following four to five years. What effect has this had?

Japan is the single largest bilateral partner in our development endeavors. Since [our] independence, Japan has provided financial support of more than $24.72 billion USD as project aid, food aid, and commodity aid in the form of loans, grants, and technical assistance (TA).

On our Golden Jubilee of Independence, Bangladesh’s GDP now amounts to $330.2 billion. Our export income has crossed the $40 billion mark, while foreign reserves stand at $44.03 billion.

We are currently the 35th largest economy in the world in nominal terms, and the 30th largest by purchasing power parity. Bangladesh is now self-reliant in food production and doing well in fisheries, cattle and poultry, fruits and vegetable production.

Bangladesh will always fondly remember the contribution of Japan and the support of the Japanese people in our journey towards development and progress.

A further ￥338.24 billion JPY ($3.1 billion USD) was extended in loans in 2020. How does this financial support contribute to the goal of achieving a “free and open Indo-Pacific”?

The loan of 2020 was the highest ever. In addition, JICA (Japan International Cooperation Agency) has provided Bangladesh a loan of ￥35 billion JPY in COVID-19 emergency response support.

One of the many important examples of the Japan-Bangladesh Comprehensive Partnership is Japan’s support in the development of regional connectivity. Under the Bay of Bengal Industrial Growth Belt (BIG-B) initiative, Japan and Bangladesh will continue to collaborate on connectivity in southern Bangladesh, improving the lives of millions.

Further, the government of Prime Minister Sheikh Hasina is taking pragmatic steps to ensure that our nation’s development will contribute not only to the prosperity of the people of Bangladesh but of the entire region and beyond.


Prime Minister Sheikh Hasina has spoken of plans to develop special economic zones within the country, including one for Japanese investors. How will the zones work?

There are now 100 special economic zones under development across the country. The main objective is to attract foreign investment, protect arable and forest land, and create jobs. These objectives will be achieved via a program of planned industrialization that will fulfill local demand, boost exports, and strike a balance between economic development and food security for the people.

As part of the trend of current global relocations, Prime Minister Sheikh Hasina has directed all agencies concerned to take immediate steps to formulate a comprehensive strategy and future action plan that will attract investors to Bangladesh.

Japanese investment in Bangladesh has soared by 160% year-on-year to $72.9 million USD in 2019. As the Japanese business community continues to pay increased attention to Bangladesh as the next destination of investment, the government of Bangladesh and JICA signed an agreement to establish a specific Japanese Economic Zone (JEZ).

As a joint venture project, the JEZ is under construction in Narayanganj, close to the capital city, Dhaka. Once implemented, the expanded over 1,000 acre JEZ is expected to bring in investment worth $20 billion USD, with industries such as agro-food, light engineering, chemicals, automobile assembly, garments, and pharmaceuticals all expected to see considerable rise in Japanese investment.


Which sectors of the economy see the most interaction between Japanese and Bangladeshi businesses?

We are witnessing increased interest and enthusiasm from Japanese entrepreneurs regarding business and investment opportunities in Bangladesh. Currently, more than 300 Japanese firms are operating in the country, an increase of more than 10 times over the last decade.

The two key sectors for investment are energy and infrastructure development. However, there are also many potential sectors where Bangladesh seeks investment from Japanese businesses. These include garments and textiles, leather and leather goods, electricity, plastic, ICT, light engineering, ceramics, medical equipment, ship building and automobile manufacturing.

The middle-income group in Bangladesh is also expanding at a significant pace. Japanese investments that will cater to this growing domestic demand and facilitate supply chain reconfigurations that hold immense potential for growth.


With the 50th anniversary of the establishment of diplomatic ties between Bangladesh and Japan in 2022, what are your hopes for the future relationship between the two countries?

We are planning to celebrate this historic milestone in a befitting manner through various events held in both Bangladesh and Japan. The exchange of cultural troupes, film festivals, art exhibitions, diplomatic exchange, the unveiling of commemorative postage stamps and coins are just some of the ways we expect to mark the occasion.

We believe that activities of this kind demonstrate the strong bilateral relationship between the two countries and will further cement our partnership in years to come.

The government of Prime Minister Sheikh Hasina has committed to transforming Bangladesh into a modern, developed, and knowledge-based country by 2041. Each of our development partners support us in this endeavor.

The partnership with Japan has been very significant in this regard. A large number of projects funded by Japan — ranging from social development, to energy, power generation, communication infrastructure, and investment in special economic zones — continue to progress at great speed. These allow us to not only enhance our domestic and regional connectivity, but also to ensure our overall socio-economic development.

Many of these projects are expected to be completed between 2022 and 2025. In addition, Japan’s cooperation has been sought in sectors such as agriculture, ICT and other high-tech industries, the blue economy, and in health and human resource development. Such collaboration, of course, widens the scope and dimension of future relations.

Finally, both countries maintain close cooperation on regional and international issues of mutual interest, including the promotion of peace and stability and the achievement of UN Sustainable Development Goals.

Standing at this important juncture in our relationship, we look forward to further strengthening our existing bond and continue developing our ties of friendship for the future.

Bangladesh achieved independence from Pakistan on March 26, 1971. A country of 163 million people, Bangladesh lies on the boundary between South and Southeast Asia. The country boasts the fastest real GDP growth rate in Asia and is one of the fastest growing economies in the world. Next year, 2022, will mark 50 years of diplomatic relations between Bangladesh and Japan.