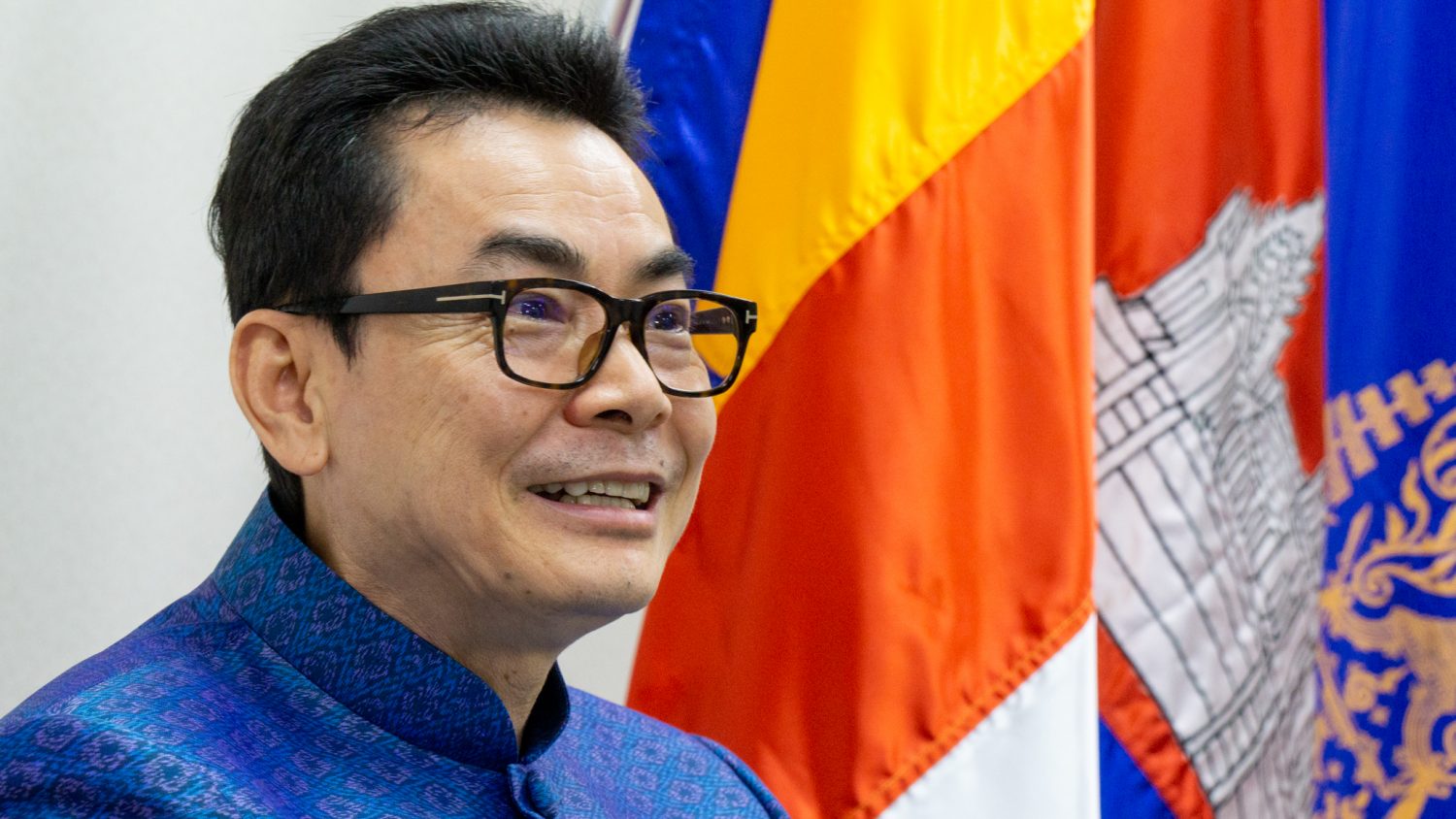 For the people of Southeast Asia, mid-April marks the solar New Year, the point at which the sun enters the constellation Aries. Celebrated throughout the region, the date also coincides with the end of the harvest.

To learn more about the festivities and their significance, JAPAN Forward sat down with Cambodian Ambassador to Japan, Ung Rachana. Over a delicious meal of traditional New Year cuisine, the ambassador provided a warmly entertaining and informative insight into Cambodian culture.

Taking on the interview with his own style, the ambassador wanted to share the richness and vitality of his country not only through an interview, but through its culture. With the openness and affability characteristic of the Cambodian people, the ambassador and his personal chef served us a starter of Khmer Amok, a rich fish stew wrapped and steamed inside banana leaves. Next came a traditional red curry thick with coconut milk. Finally, the ambassador treated us to a duo of Cambodian sweets: Sang Khya L’peouv (creamy pumpkin custard) and Nun Ansom Chek (sticky rice and banana pudding). The custard, it turned out, was also linked to the ties Cambodia shares with Japan.

Despite its troubled past, Cambodia is now one of the fastest-growing economies in Asia. Enjoying an extended period of peace since 1998 thanks to Samdech Prime Minister HUN Sen’s win-win policy, the land of Angkor Wat is now a core tourist destination. We asked the ambassador about Japan’s role in assisting Cambodia’s post-conflict recovery, and his views on the close relationship shared between the two nations.


April 14-16 marks the Solar New Year across the Southeast Asia region. How is this event celebrated in Cambodia?

Cambodians celebrate Khmer New Year (Chaul Chhnam Thmey in the Khmer language) as a way to mark the end of the harvest. At this time, farmers enjoy the fruit of their labor before the onset of the rainy season.

First, we visit the temple. The Cambodian population is roughly 97% Buddhist, and we use this time to offer food to the monks.

Second, we visit family. Cambodian society is structured around large extended families and the bonds we share with relatives are both harmonious and close. These reunions also place a particular emphasis on the elderly.

Japan is said to enjoy an extremely well-respected reputation in Cambodia. Why do Cambodians view Japan so positively?

If we look back to the early 1990s, Japan provided much needed assistance to Cambodia in our search for peace in difficult times. Ever since the advent of democratic elections in 1993, Japan has continued to aid Cambodia’s post-conflict reconstruction.

From an economic standpoint, Cambodia has enjoyed constant growth over the past two decades. Despite the anomaly of 2020 and the problems posed by the COVID-19 pandemic, we have achieved an average annual GDP growth rate of 7% for the last two decades.

The assistance provided by Japan’s ODA (Official Development Assistance) – particularly in areas such as health, infrastructure, and education – has played a crucial role in these achievements.

Beyond its engagement in the socio-economic sector, as co-chair of ICC-Angkor (International Coordinating Committee on safeguarding and development of historic sites of Angkor), Japan’s government also assists in the protection and restoration of Cambodia’s world-renowned cultural monuments.

The Japanese government has also established a number of KUSANONE (grassroots) programs in Cambodia. These human security development projects greatly benefit the rural community. Providing essentials, such as sanitation, education and clean water. They greatly improve the lives of Cambodians living in remote areas.

Mineaba, for instance, is now an official partner of the Cambodia national soccer team, whereas Taica provides soccer facilities to Cambodia’s schools. As official shirt sponsor of the J-League soccer team, Shimizu S-Pulse, Taica also works to promote Cambodian tourism with a “Cambodia: Kingdom of Wonder” logo on the jersey.

Further, the AEON 1% Club Foundation sees the Japanese retailer donate 1% of its pre-tax profits to communities in which its stores operate. These donations provide scholarships for Cambodia’s students and clean drinking water for rural areas, all while fostering a spirit of international cooperation.

Each of these good deeds remains in the hearts of our people. As one Cambodian proverb says:


What is the history of the Japan-Cambodia relationship?

The delegation, however, was hit by disaster, a storm, and their ship was severely damaged. The envoy requested help from Khmer King Satta I, presenting him with a letter from Lord Sorin and some gifts.

By the order of King Satta I, the ship was repaired and returned to Japan. With it were included a number of items representative of the Khmer kingdom: pumpkin, elephant, pepper and other assorted goods.

From this history we learn that it is not by chance that the Japanese word for pumpkin is kabocha. The similarity between this word and Kampuchea – the Khmer word for ‘Cambodia’ – is clear.

In modern times, diplomatic relations between Cambodia and Japan began in January 1953. This was before Cambodia gained full independence from France in November of the same year.

It was here that the strong foundations for beneficial cooperation and strategic partnership between the two nations were laid. A Treaty of Amity was then signed in 1955.

The nations have enjoyed warm relations and expanded cooperation ever since. Given the growing significance of these bilateral relations, our multidimensional cooperation was elevated to the level of “strategic partnership” in December 2013.


On an August 2020 trip to Cambodia, Japan’s Foreign Minister Toshimitsu Motegi spoke of the need for Japan and Cambodia to cooperate on creating a Free and Open Indo-Pacific. What is the significance of this concept for Cambodia?

Mr Motegi’s visit in the midst of the COVID-19 pandemic cemented the strong bond of friendship that exists between the two countries. It demonstrated that a global pandemic, while hindering interaction to some extent, cannot and will not put an end to our cooperation.

From the start, Cambodia has supported Japan’s Free and Open Indo-Pacific strategy in its aims to promote economic prosperity, connectivity and quality infrastructure, both in our own region and beyond.

Through Japan’s ODA, bridges, roads and ports have been built and enhanced. It is clear that such infrastructure development projects are crucial for Cambodia’s continued economic growth.


Which sectors of the economy see the most interaction between Japanese and Cambodian businesses?

As previously mentioned, Minebea is a great example of a thriving Japanese industry in Cambodia. Beginning operations there in 2010, the company now employs approximately 9,000 local workers for its production of electronic components and smart lights.

Another Japanese success story in Cambodia is AEON mall, which opened its first shopping complex there in 2014. The company then opened a second mall four years later. A third is now under construction and is expected to begin operations in 2022.


Prime Minister Hun Sen has spoken of a desire to develop the strategic partnership with Japan on issues such as information exchange, counterterrorism and defense training. How do you see this partnership developing in future?

Since our relationship was upgraded to one of “strategic partnership” in 2013, we have seen the continued development of beneficial and multi-dimensional cooperation between Cambodia and Japan. On the policy front, this means that Cambodia and Japan now support one another on bilateral matters and coordinate very closely with regard to regional and international issues of common concern.

Close and frequent interaction between leaders and senior officials of the two countries, not to mention routine communication at all levels of administration, provide the cornerstone to this partnership.

With regards to economic cooperation and development, the number of Japanese companies investing in Cambodia is continually on the rise. The accumulated investment by Japanese investors from 1994 to 2020 amounted to roughly $2.5 billion USD.

People-to-people exchange, serving as a bridge between Cambodia and Japan, will become more active as people from both countries continue to learn from one another. Cambodia is also becoming increasingly attractive to Japanese people for both leisure, business and other purposes.

As the spirit of friendship between us continues to go from strength to strength, I can only feel optimistic about Cambodia and Japan’s future relationship.

ABOUT CAMBODIA and its EMBASSY IN JAPAN:

Cambodia is a Southeast Asian country of 15.5 million people. Bordered by Thailand and Laos to the north and Vietnam to the east, Cambodia gained independence from France in 1953. The Khmer Rouge took control of the country in 1975, instigating the Cambodian Genocide from 1975-1979. Parliamentary democracy was installed in 1993, and current Prime Minister Samdech HUN Sen has been elected since then.