INTERVIEW | Managed Well, Whales Will Sustain Us Over the Long Haul — Hirohiko Shimizu 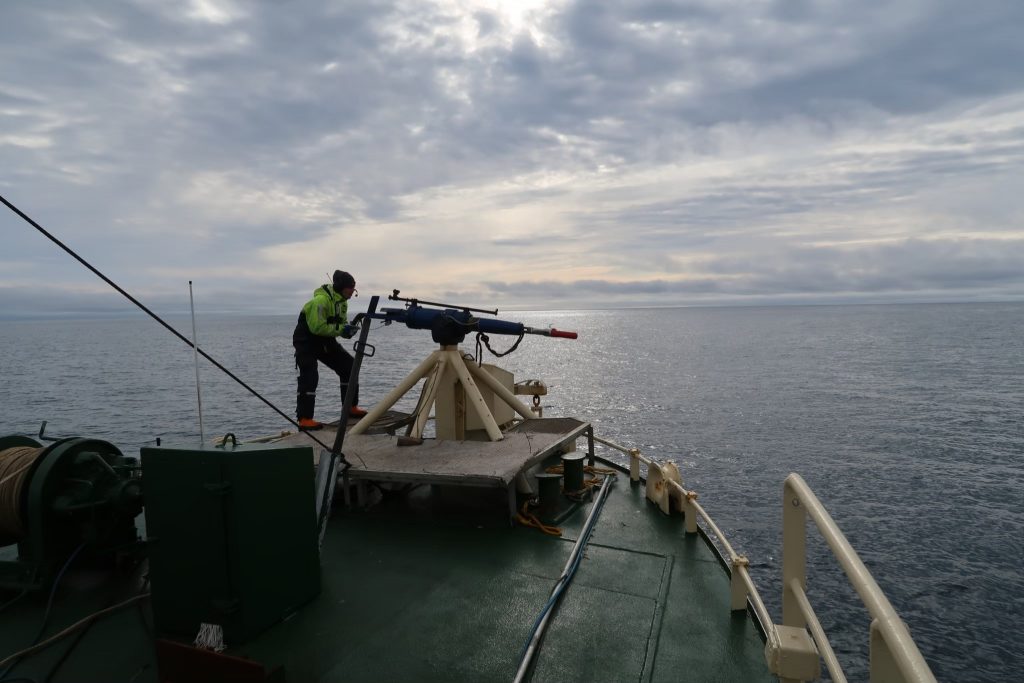 2019: About to launch a harpoon cannon in Norway

In the second half of this interview, Hirohiko Shimizu, president of Myklebust Japan, the subsidiary of Norway’s largest whaling company, Myklebust Hvalprodukter, opens up about how he became involved and roles he’s played in the business.

As the sustainability of what we eat increasingly becomes something to think about, we also asked him to share what he has learned about the benefits of whale meat, and the relationship between Japan and whales. Let’s listen.

You must have learned so much, attending international conferences, visiting events in whaling cities around the world, in addition to the many opportunities you add to experience Japanese whaling culture here.

I definitely did. The really interesting thing was that I had the opportunity to participate in culinary whale events across the country. In regions where there was a tradition of eating whale meat, long lines would always spring up. For someone like me, who was born in Nagoya, educated in Kagoshima, and working in Tokyo, this was an inspiration. There were places where so many people loved eating whale that they were even willing to wait in line.

There are such a variety of food cultures in Japan! I realized that, even though I had been born and lived for a long time in Japan, I didn’t know anything about my country. Back when I had studied abroad in South Korea and America, whenever someone asked me about Japan, I would feel a keen lack of knowledge, even though I had been born and raised in the country. It felt similar to that. At the same time, I became deeply interested in whales from a cultural perspective.

How long was your internship at the Whaling Association?

Toward the end of my one-year internship contract, I was fortunate to get a job offer. The message was: “Next year the International Whaling Commission (IWC) will be held at Shimonoseki, so you should join us and help us change public perceptions about whaling.”

So I joined the whaling company Kyodo Senpaku, which had a business relationship with the Whaling Association. Meanwhile, during my time as an intern, I was able to finish writing my graduation thesis and graduate from university.

Promoting the Merits of Whale Meat

What were your responsibilities after you went to work for Kyodo Senpaku?

It was similar to the work I did as an intern, including attending international conferences and local events.

There were other jobs as well, like serving as the business liaison when South Korea built its first whale museum. We sent over artifacts, including a whale skeleton.

Jobs related to whaling often involve international conferences or projects done on a country-by-country basis, so there is a lot of travel.

There is also a lot of interaction with domestic whale meat producers and companies using whale in their products, and at the time I often heard complaints directed at the Whaling Association and Kyodo Senpaku. The main reason for this was the large amount of whale meat that remained in storage due to insufficient advertising and publicity.

Previously, Kyodo Senpaku didn’t make a sufficient effort to promote the merits of whale meat, and it lacked the awareness of the need to inspire the industry as a whole. Those were the circumstances when I moved to sales — I wanted to increase business to decrease whale meat inventory.

You can read the rest of the article to learn about how all parts of a whale are used in everything from the food culture to puppets in traditional Bunraku theater, and about the very useful whale meat cooking manual at this link. This article was first published by Whaling Today on September 15 2021. Check out Whaling Today for deeper and unique insights into Japanese whaling culture, whale conservation efforts and sustainable whaling.

For additional information about Hirohiko Shimizu, president of Myklebust Japan, see part one of the interview here. Read the Kujira Town article in its original Japanese at this link.