Japan and the U.S. Conduct Joint Operations in the East China Sea 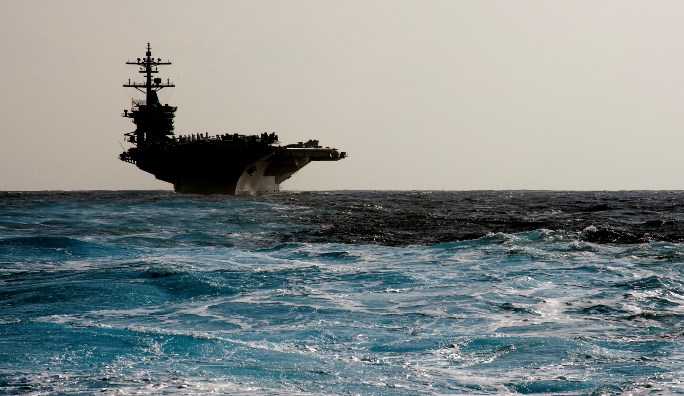 The Sankei Shimbun has learned that earlier this week, a Maritime Self-Defense Force fleet and an American carrier strike force led by the nuclear-powered carrier USS Carl Vinson began joint operations in the East China Sea. It is rare for officials to confirm full-scale drills carried out jointly between U.S. carrier groups and Japanese Maritime Self-Defense Forces in the East China Sea, but on March 9 several government sources from both the United States and Japan revealed the existence of the operations.

The joint operations between a U.S. aircraft carrier—the “symbol of US naval might”—and a fleet of Maritime Self-Defense Forces warships is a display of both the firmness of the U.S.-Japan alliance as well as of the power of the alliance’s military deterrence. The operations are intended to serve as a warning to North Korea, which has repeatedly carried out nuclear weapons tests and ballistic missile launches, as well as to deter China as it accelerates its encroachment into the East and South China Seas.

The Maritime Self-Defense Forces contributed several destroyers to the ongoing joint operations which are thought to be focused on, among other areas, checking up on tactical exercises and undertaking communications training.

After the joint operations have been completed, the Carl Vinson is expected to participate in the Foal Eagle joint Field Training Exercise (FTX), carried out each year by U.S. and South Korean militaries in the waters surrounding South Korea.

U.S. president Donald J. Trump has said that the United States is considering all available options—including military force—when dealing with North Korea. The show of military power by the United States, Japan, and South Korea is thought to be a way to urge restraint on the part of North Korea, which has been stepping up its nuclear and missile development.

At the same time, China is increasing its military pressure in the air and sea lanes around the East China Sea. The Ministry of Defense reported that on March 2 a total of 13 Chinese airplanes—the most ever reported—was discovered circling the airspace between Okinawa and Miyakojima. It has also been confirmed that three Chinese warships, including a guided missile destroyer, passed between Okinawa and Miyakojima heading from the Pacific Ocean into the East China Sea.

Late in 2016, the Chinese aircraft carrier Liaoning crossed the “first island chain” running along Kyushu, Okinawa, and Taiwan and carried out its first ocean voyage training in the western Pacific. The Chinese government is increasing its defense spending for this year to 1.44 trillion yuan, or more than $200 billion, fueling concerns that China’s military expansion will only escalate into the future. One additional objective of the joint exercises between the Carl Vinson and the Maritime Self-Defense Forces is to check this expansionism.

The Carl Vinson is nearly 1100 feet long, is manned by approximately 3,000 officers and sailors, and can carry approximately 90 planes on board. She is accompanied while underway by many other vessels, such as destroyers, submarines, and refueling ships, which together form the Vinson’s carrier strike force. A single U.S. carrier strike force is said to be equal to the military might of an entire country, and thus presents a formidable threat to both China and North Korea.