Japan and Turkey: A (Hi)story of Kindness

It is often said that the strongest of friendships are forged during the hardest of times. Sometimes strength can come from tragedy, as it did with Japan and Turkey in September 1890.

Through a unique set of circumstances, Japan and Turkey forged a friendship that has lasted over 125 years. And yet, despite being Turkish myself, I was unaware of this connection until recent years. Allow me to explain.

While planning for my second vacation in Japan, I discovered that there was a Turkish memorial and museum on the southernmost tip of Japan’s main island, Honshu, in the coastal town of Kushimoto. To say that I was surprised would be an understatement. I felt that I needed to travel to Kushimoto to learn more.

In September 1890, the Ottoman navy ship Ertuğrul was sent from Turkey to Japan on a goodwill voyage to improve relations between the two countries. On its return voyage, the ship was caught in the midst of a typhoon and tragically collided with rocks on the coast of Oshima, a small island connected to Kushimoto by bridge. The tragedy resulted in the loss of 533 sailors and officers. There were only 69 survivors who lived to tell the tale.

The people of Oshima tried to save as many of the Turkish survivors as possible, and even shared the town’s very limited food supplies with them. There was a strong feeling of empathy towards the survivors, not only from the people of Oshima but from the Japanese public, which would lay the foundation for the friendship between Japan and Turkey that continues to this day.

A Visit to Oshima

In June 2017, the day finally came for me to visit Oshima. The trip was a three-hour, 30-minute journey from Osaka to Kushimoto in Wakayama prefecture, but luckily the trip was very comfortable — thanks to Japan’s reliable rail network. 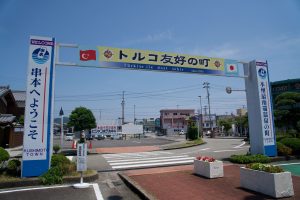 When I first arrived at Kushimoto train station, I noticed that there was Turkish writing all over the ticket machines and around the station. As I left the station, I also noticed a large permanent banner that translated to “Turkey Friendship City” and a replica of the Turkish ship Ertuğrul.

It turns out that Kushimoto has become a sister city of both Yakakent and Mersin in Turkey. I couldn’t wait to tell my friends and family, and they were just as surprised as I was.

Next to the station there was a tourist information center, where I was greeted by a friendly team wearing polo tops with both the Japanese and Turkish flags side by side. I felt a real sense of pride when I saw the two flags together. For the first time, I started to appreciate the seriousness of the bond between these two countries. 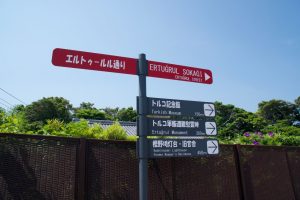 Outside the tourist information center there was a shuttle bus service that took me straight to the Turkish memorial and museum, approximately 45 minutes away from Kushimoto’s train station. When I arrived, I was surprised to see that even the streets had Turkish names. 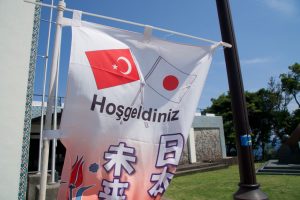 Alongside the museum was a memorial to those who had lost their lives aboard the Ertuğrul. There was also a statue of Mustafa Kemal Atatürk, the founder and first president of the republic of Turkey. Even more surprising, there was a Turkish gift shop that sold many popular souvenirs that you would expect to find in Turkey. 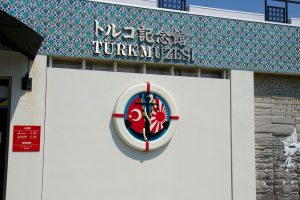 When I finally entered the Turkish museum, I was greeted in Turkish and given an English language guide of each of the articles inside the museum by a very friendly Japanese lady who worked there. In that moment, I felt even more affinity towards Japan. As I walked around, I noticed that there was a viewpoint where I could see the very rocks that caused the wreckage on that fateful night. 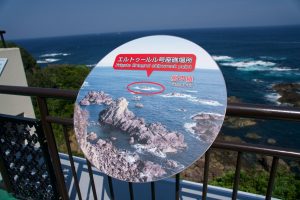 Not One but Two Incredible Stories of Friendship

The museum was very well-put-together and did justice to all of those aboard the Ertuğrul. But it also told the story of another chapter in the history of Japan and Turkey’s relationship. Ninety years after the Ertuğrul tragedy, Turkey would have an opportunity to help out a friend in need.

In 1985, Japan had 215 nationals living in Tehran, the capital of Iran. In the midst of the Iran-Iraq war, the Iraqi government announced that, within 48 hours, “all aircraft that fly above Iran will be the objects of Iraqi attacks.” This led countries with citizens in Iran to send their own airlines to rescue their citizens before the 48-hour deadline.

Japan Airlines required a confirmation of safe passage from Iran and Iraq before they would send a plane, which, unfortunately, they did not receive. As a result, Japan was not able to send a plane to rescue its citizens.

The Japanese embassy in Tehran reached out to many countries for help. However, only Turkey answered their call, sending a plane to Iran to rescue the stranded Japanese citizens. Following their rescue, there was some confusion as to why Turkey was the one to help Japan. The Turkish government then released the following statement: “We have not forgotten the rescue of the sailors aboard Ertuğrul. Thus, once we heard there were Japanese citizens in need of help, we went to their rescue.”

You’re probably thinking this all sounds like a movie, right? Well, in 2015 a Turkish and a Japanese director cooperated to make the movie, called Ertuğrul 1890 in Turkish and Kainan 1890 in Japanese (both available with English subtitles). The movie starts by telling the story of Ertuğrul, and concludes by depicting the events that occurred in Tehran. It was truly fascinating for me to see the portrayal of both Turkish and Japanese culture on screen, and I would highly recommend anyone who finds this story fascinating to watch the movie.

To this day, the friendship between Japan and Turkey is still strong. The tale of Ertuğrul is even taught in junior high school history textbooks across Japan. 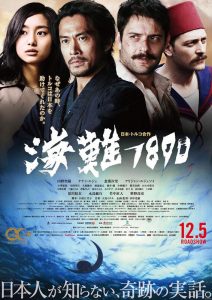 Tourism from Japan to Turkey has increased significantly in recent years, with Cappadocia being one of the most popular destinations. Both countries have worked together on mega projects, such as the Marmaray, a rail transportation project linking Istanbul’s European side to the Asian side by going underneath the Bosporus (a narrow strait that connects the Black Sea with the Sea of Marmara).

There have been moments during my time in Japan where someone asks me where I am from. And when I tell them that I am Turkish, they proceed to tell me the very story about the friendship that I have told you today.

In a world of uncertainty, one thing stands true: an act of kindness inspires kindness. I hope that this story can serve as a reminder to us all.