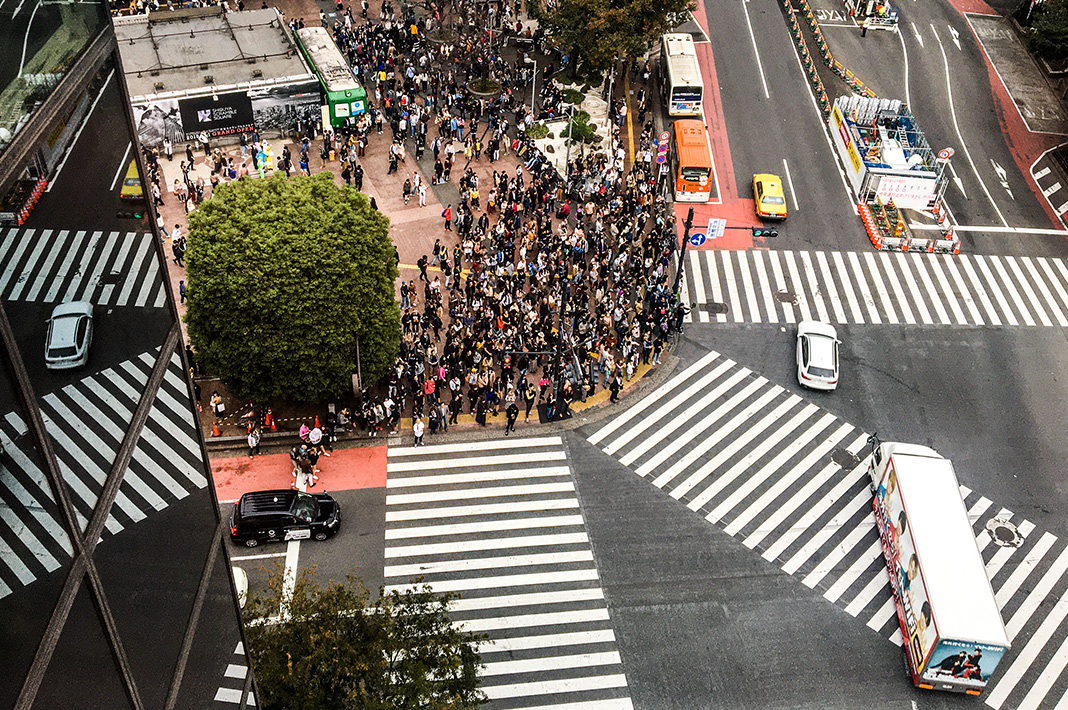 Shibuya's Scramble crossing. Think of it as a choice: which direction will you take this winter?

Welcome to the first in a series by German foreign correspondent Agnes Tandler, who has been reporting on COVID-19 since the outbreak of the pandemic. In this installment, she introduces Europe's experience and looks at why Japan's infection levels seem different from those of other major economies. Follow her monthly reports on JAPAN Forward as the global COVID-19 pandemic continues.

Europe is moving towards another long, hard corona winter, with infection numbers at an all time high and death rates rising.

The week of November 15 saw the Netherlands become the first country in Europe to bring back lockdowns, although this time a lighter version compared to previous ones. Supermarkets, bars, and restaurants in Holland need to close early, people are asked to work from home, and events have been restricted. The Dutch National Institute for Health reported more than 110,000 cases in one week, an increase of 44% compared to the week before.

Other countries have seen similar surges. “It’s five past twelve,” the head of the German national public health agency, Lothar Wieler, has warned, painting the picture of a “very bad Christmas.”

Germany reported over 65,000 new COVID-19 infections on Thursday, November 18. Wieler pointed out that around 520 of the 65,000 newly infected will eventually die from the disease in the coming weeks. “There is nothing we can do about this,” he said with resignation.

Germany’s political response has so far lacked urgency while the government and opposition parties have been bickering over who takes the blame for the steep rise in COVID cases.

The World Health Organization (WHO) Europe director, Hans Kluge, recently warned that Europe is “back at the epicenter of the pandemic, where we were one year ago.” If the current trajectory continues, Europe could see another half a million more pandemic deaths by February, Kluge said.

Over the last two months, Europe’s COVID-19 fortunes have dramatically shifted. By the end of the summer, many countries had done away with tough restrictions as their vaccination programs charged ahead and cases plummeted.

Travel and tourism restarted. Clubs, restaurants, and bars reopened. Mask mandates disappeared. Much of this seems to have been informed by wishful thinking that the pandemic was nearing its end.

At the same time, low vaccination rates in many European countries were already a cause for alarm. At present, only 67% of Germany’s population has received two shots. Switzerland and Austria report even lower rates with 64% and 63%, respectively. Eastern European countries like Bulgaria (23%) are at the bottom of the list.

Low vaccination rates and the rush to do away with public health measures like masks and social distancing are now fuelling the rise in cases, prompting countries to scramble to put the brakes on. Austria made vaccinations mandatory across society from February 2022.

Even Denmark with 76% of the population fully vaccinated is considering bringing back COVID rules, two months after it ditched them entirely. Riding high on a wave of optimism in mid-September, the Nordic nation had declared that COVID-19 was no longer “an illness which is a critical threat to society.” That optimism now looks out of place.

COVID cases in the United States are also on the rise again, with experts sounding the alarm. “I’ve been predicting a pretty bad winter wave again, and it looks like it’s starting to happen,” writes Peter Hotez, the dean of the National School of Tropical Medicine at Baylor College of Medicine in Houston, Texas, on Twitter. “There’s just too many unvaccinated and too many partially vaccinated people.”

Meanwhile, Japan’s path is short of a miracle. The country now reports around 150 new coronavirus cases per day on average — down from more than 25,000 just three months ago.

After being criticized for a slow and late start of inoculations, it is among the most COVID-immunized countries in the world. With over 76% of Japan's population fully vaccinated, it has the highest rate of all G7 countries, according to Johns Hopkins University global tracking coronavirus resource center. More than 91% of the population aged 65 and over have had two shots. Even in the youngest age group that can get vaccinated — children aged 12 to 19 —  60.7% are fully immunized. While the vaccination uptake has slowed down in recent weeks, Japan is still on course to fully vaccinate over 80% of its population.

With its pragmatic approach and clear message, Japan’s COVID vaccination program has been a success story. By only sticking to two vaccines from Pfizer and Moderna, it has also avoided confusion about age limits and sensationalist reporting over side effects.

Furthermore, Japan has already lined up a booster campaign and will start vaccinating young children from 5 to 11 years old in 2022.

The jury is still out on why Japan has been doing so well and whether it can avoid a new surge.

Japan’s state of emergency measures, which were lifted on September 27, were mere requests, focused mainly on getting bars and restaurants to close early and not serve alcohol. During the 2021 emergency measures, many people continued to commute to work on crowded trains, sports and cultural events went ahead, although with some social distancing controls and hygiene rules.

Some possible success factors for Japan might be due to politics. Unlike in Europe or the United States, COVID-19 countermeasures and vaccines in Japan have not been made a politically contentious issue or hijacked by populist parties and governments.

Masks and coronavirus shots are not seen as a question of individual freedom versus state authority. Without any mandates, mask wearing in public has been universal in Japan throughout the pandemic.

A recent review of non-pharmaceutical interventions has found that mask wearing, social distancing, and handwashing are all effective measures at curbing cases — with mask wearing being the most effective, reducing the incidence of COVID-19 infections by 53%.

“This systematic review and meta analysis suggests that several personal protective and social measures, including handwashing, mask wearing, and physical distancing are associated with reductions in the incidence of COVID-19,” the researchers wrote in the British Medical Journal.

Given the seasonality of the virus, Japan will most likely not avoid another winter wave. Still, with high vaccination rates, a booster campaign lined up, and protective measures in place, it might see a lot fewer severe cases and have better control of a pandemic that seems far from over. All in all, one can’t help but be really impressed by Japan’s vaccination campaign.

Agnes Tandler has been based in Japan since the start of the pandemic in 2020, where her reporting covers COVID-19 for a daily healthcare newsletter in Germany.