Japan, US Agree on Joint Research to Counter Hypersonic Missiles 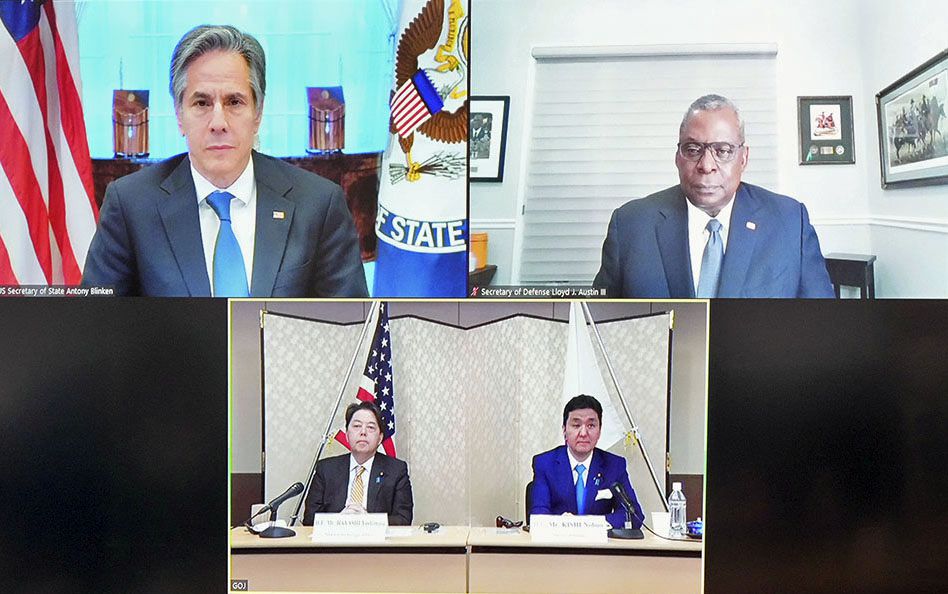 US Secretary of State Antony Blinken, along with US Secretary of Defense Lloyd Austin, held a 2+2 virtual meeting with Japanese counterparts Foreign Minister Yoshimasa Hayashi and Defense Minister Nobuo Kishi.

During the opening session of the “two-plus-two” talks between Japan and the United States held virtually on Friday, January 7, the top diplomats and defense chiefs from the two countries agreed to collaborate in research and development of new advanced technologies to counter hypersonic missiles and other cutting-edge weapons systems being developed by China and North Korea.

The joint declaration issued after the meeting explicitly mentioned that, in its strategic review process, Japan would “examine all options necessary for national defense including capabilities to counter missile threats.”

This was an indication that, amidst the discussions concerning burden sharing between Japan and the United States, Japan will consider various options, including possession of the capability to attack enemy bases.

Attending the meeting were Japan’s Foreign Minister Yoshimasa Hayashi,  Japan’s Defense Minister Nobuo Kishi, US Secretary of State Antony Blinken, and US Secretary of Defense Lloyd Austin. The meeting included the signing of an agreement by Japan to pay the US an average of ￥211 billion JPY ($1.825 billion USD) annually over the next five years, beginning in the next fiscal year (April 2022), for a total of  ￥1.055 trillion JPY (about $9.1 billion USD) to support the stationing of US military forces in Japan under the bilateral security treaty. Such payments are referred to as the omoiyari yosan (“consideration budget”).

During the meeting, Defense Minister Kishi said that Japan has not ruled out any options as it moves to rapidly and fundamentally bolster its defense capabilities. The US side welcomed his position. The two sides also underscored the need to closely coordinate during the process of review in order to achieve robust progress on evolving alliance roles, missions and capabilities (RMC), as well as bilateral planning for contingencies.

Blinken stressed the significance of the exchanged notes making it easier for scientists and engineers on both sides to cooperate in order to counter the threat of hypersonic weapons and enhance space-based technologies.

Austin said that Japan’s “growing ability to contribute to regional peace and stability” will work to strengthen bilateral roles and missions.

In reference to China, the joint statement declared that the two allies had resolved “to work together to deter and, if necessary, respond to destabilizing activities in the region.” They also signaled their intent to share information concerning coercive behavior that threatens regional peace and security.

Concerning the Senkaku Islands, Japan and the US reaffirmed that the Japan-US Security Treaty covers the islands that are part of Ishigaki City, Okinawa Prefecture. They also reiterated their strong objections to China’s unlawful maritime claims, militarization and coercive activities in the South China Sea.

In addition, they expressed deep concern about human rights issues in the Xinjiang Uyghur Autonomous Region and Hong Kong, and emphasized the importance of peace and stability in the Taiwan Strait.

The US side also reiterated its commitment to use its full range of military capabilities, including nuclear, in order to defend Japan.

Option of Attacking Threatening Enemy Bases Not Ruled Out

The Japanese side resolved to examine all options necessary for national defense ー including “capabilities to counter missile threats” ー in an apparent reference to the capability to attack threatening enemy bases. However, the development of such a capability would require major adjustments with the US side. The current division of roles under the bilateral security treaty designates the US side, which possesses the capability to attack enemy bases, as solely responsible for such attacks, while Japan’s Self-Defense Force is to handle defense.

Japan is now looking to speed up consultations with the US side as it considers the revision of its National Security Strategy and two other key security documents by the end of 2022.

Foreign Minister Hayashi told the meeting that this will be a critical year for Japan’s security policies. Emphasizing the country’s recognition that consultations with the US side will be very important as Japan formulates these three strategic documents, he noted that the two-plus-two meeting proved very timely in kicking off this process.

In other words, the results of the bilateral consultations on alliance roles, missions and capabilities (RMC) as called for in the joint statement are to be reflected in a unified form. These RMC consultations will primarily involve senior Japanese and US officials, including those responsible for specific areas such as missile defense, fighter aircraft and ships. The two sides will try to work out the right balance in role assignment and required equipment to meet the threats directly facing the two allies.

In October of 2021, Prime Minister Kishida said he was considering various defense options, including the development of the capability to hit enemy bases. And, indeed, the recently concluded two-plus-two meeting stressed the need to “closely coordinate” during the strategic review of all options, including the ability to strike enemy bases. It is therefore certain to come up during the RMC consultations.

Nevertheless, talking about the ability to counter missile threats is not enough without the identification of hypothetical enemies and the defining of respective roles and deciding on the actual equipment needed.

For example, different weapons systems would be needed depending upon whether we are talking about “pinpoint” attacks to take out North Korean missiles, Chinese radar or supply storage facilities, runways or attacks designed to disable the functioning of deep underground headquarters facilities

Austin told the two-plus-two meeting that he was eager to see the establishment of a framework for respective roles and missions that will reflect Japan’s growing capabilities and “optimize our alliance force posture to strengthen deterrence.”

The most recent two-plus-two meeting served to reaffirm that Japan’s possession of the capability to attack enemy bases would give a boost to “optimization” within the framework of the Japan-US alliance.

Koji Sugimoto is a senior political writer for Sankei Shimbun.