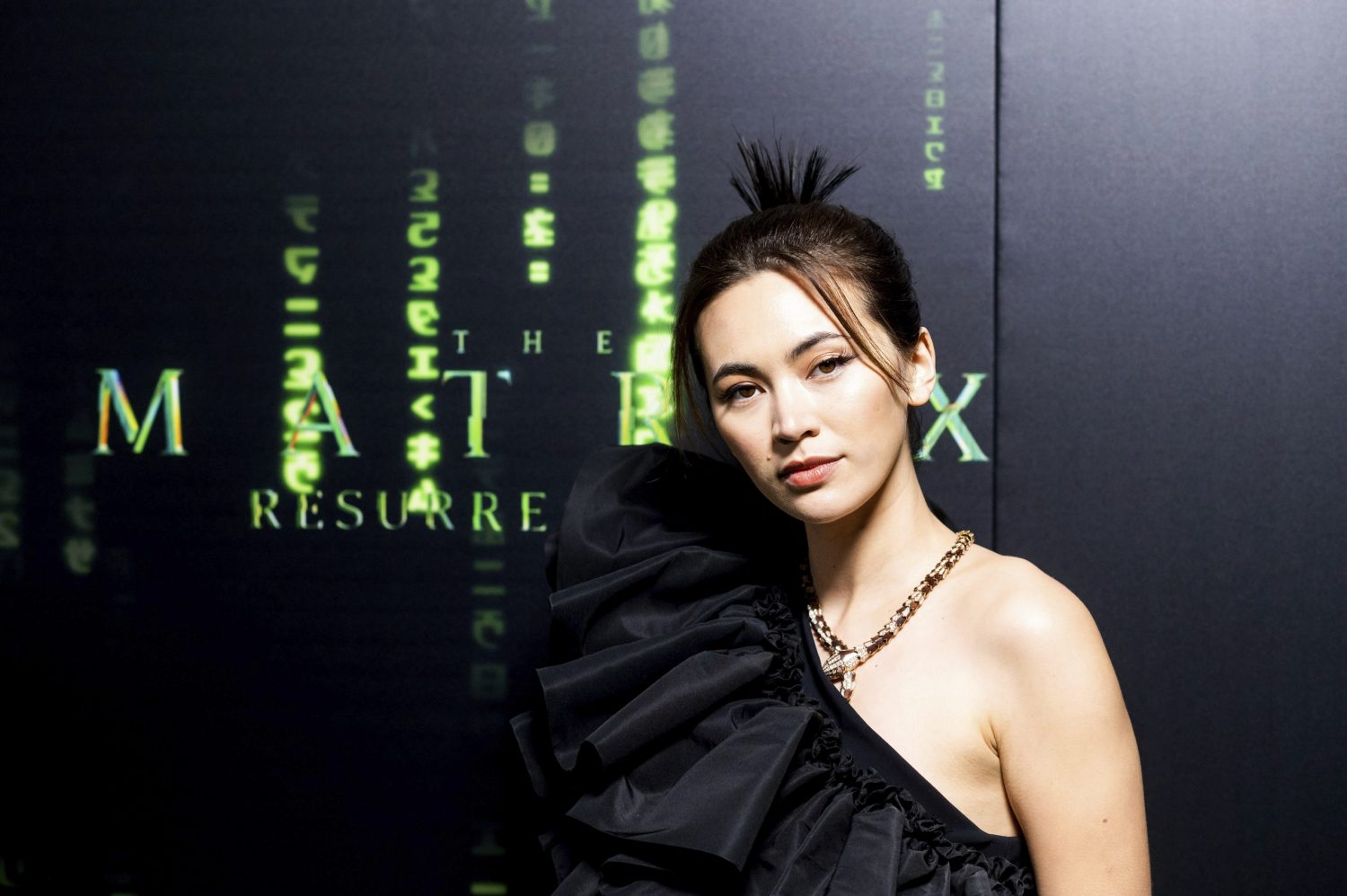 Jessica Henwick arrives at the premiere of "The Matrix Resurrections" on Saturday, Dec. 18, 2021, at the Castro Theatre in San Francisco. (AP Photo/Noah Berger)

The fourth installment of the Matrix series — a highly popular Hollywood movie franchise — was released in Japan on December 17 and then globally on December 22.

Directed and co-written by Lana Wachowski, The Matrix Resurrections is the first Matrix film to be released in 18 years.

The debut installment in 1999 — titled The Matrix, and co-directed and co-written by the Wachowski sisters — is widely considered to be groundbreaking, as CNN described in its online edition on December 21:

“That movie became a true cultural phenomenon and a watershed in sci-fi storytelling and visual effects, redefining Hollywood blockbusters for the 21st century.”

On this occasion though, an actress of Asian descent, Jessica Henwick, displayed more presence than the Hollywood titan Keanu Reeves, who played the leading character of Neo.

It is unprecedented for an actress of such ethnicity to feature so prominently in a major movie produced by a large Hollywood studio.

The Matrix Resurrections is also a Masterpiece

When The Matrix came out in 1999, the internet had not yet dominated society, and some viewers struggled to follow the notion of the simulated reality depicted in the film.

Nevertheless, the “bullet time” filming technique that was used for The Matrix — which includes characters jumping, freezing in the air, and then kicking the enemy following a 360-degree rotation — was impressive then, and it is still spectacular today.

However, in the 18-year period since The Matrix Revolutions, the technology referred to in the trilogy has evolved massively, so I was slightly anxious as to how the fourth installment would tackle this issue.

But the genius who is Wachowski did well. She managed to achieve a challenging and stunning movie that surpasses the imagination.

There was also a positive response in the West. On December 22, a piece in the Atlantic wrote:

“Lana Wachowski has made a film that addresses the discombobulations of contemporary life, critiques Hollywood’s general reboot culture, and serves as a surprisingly sweet work of nostalgia.”

“The Matrix Resurrections is a nostalgic triumph that reminds us of what — and who — we loved about the original trilogy, without constraining itself to a familiar path.”

Review of the Original Trilogy is Inevitable

Neo, played by Reeves, is the savior in a war between humans and machines in the Matrix trilogy.

In The Matrix Resurrections, the Neo character goes by his birth name, Thomas A. Anderson —and Anderson is a successful video game designer who works based on his memories as Neo.

Anderson is complimented by numerous gamers, who tell him their lives have been changed by his work, but the designer struggles to separate reality from delusion. Meanwhile, Neo’s ally Trinity (played by Carrie-Anne Moss) appears in the fourth installment as a regular housewife called Tiffany.

One day, Bugs (played by Jessica Henwick) — a mysterious woman who has been searching for Anderson for about 20 years — turns up with Morpheus (played by Yahya Abdul-Mateen II).

They reveal a terrifying truth to Anderson. Although suspicious, Anderson decides to face the truth. Just as in the first installment, he turns down the blue pill, which would take him to a simple everyday life — and he chooses the red pill instead.

In the West, and notably in the US, the original Matrix trilogy had a tremendous influence on society and culture. Major newspapers and magazines started using the phrase: “Do you choose the red pill or the blue pill?” when referring to a choice between two options.

The fourth installment has been made on the assumption that many people have seen the original trilogy. Viewers familiar with the first three films will undoubtedly be excited by the nostalgic scenes, places, and characters.

On a personal note, I laughed at a scene involving The Merovingian (played by Lambert Wilson), who also appeared in previous installments of the franchise.

But the star of The Matrix Resurrections is actress Jessica Henwick, who plays the captain of a hovercraft called The Mnemosyne.

Born in August 1992 in Surrey, England, Henwick is the daughter of a British novelist father and a Singaporean-Chinese mother. She appeared in the BBC series Spirit Warriors — becoming the first actress of East Asian descent to play a leading role in a British television drama.

Henwick went on to appear in the popular American HBO drama Game of Thrones in addition to Star Wars: The Force Awakens.

As I explained in an earlier Sankei Shimbun column dated November 29, 2019, Hollywood sees actors of East Asian descent as being lower than black or Hispanic actors, and even lower in the case of actresses.

However, as understanding surrounding diversity deepens, more actors of Asian descent are taking up major roles, such as the Vietnamese-American actress Kelly Marie Tran, who appeared in Star Wars: The Last Jedi.

However, Henwick’s role in The Matrix Resurrections is arguably more significant in that she rescues Neo, and fights bravely with her cool blue hair while maintaining a dignified demeanor – making her the star of the show.

In fact, Henwick was offered another big opportunity around the same time – to be in the Marvel film Shang-Chi and the Legend of the Ten Rings. But in the end, she chose The Matrix Resurrections. She compared the dilemma to choosing between the blue pill and the red pill in a recent interview with Entertainment Weekly.

The Matrix trilogy was inspired by Japanese anime and manga, such as Ghost in the Shell, Lupin the Third, and Ichi the Killer. A Japanese shinkansen appears in this latest installment (a possible homage to Demon Slayer?) – which reminds us of Wachowski’s interest in Japan.

With the Japanese movie Drive My Car receiving high praise in the West last year, the next cinematic era could be an Asian one.