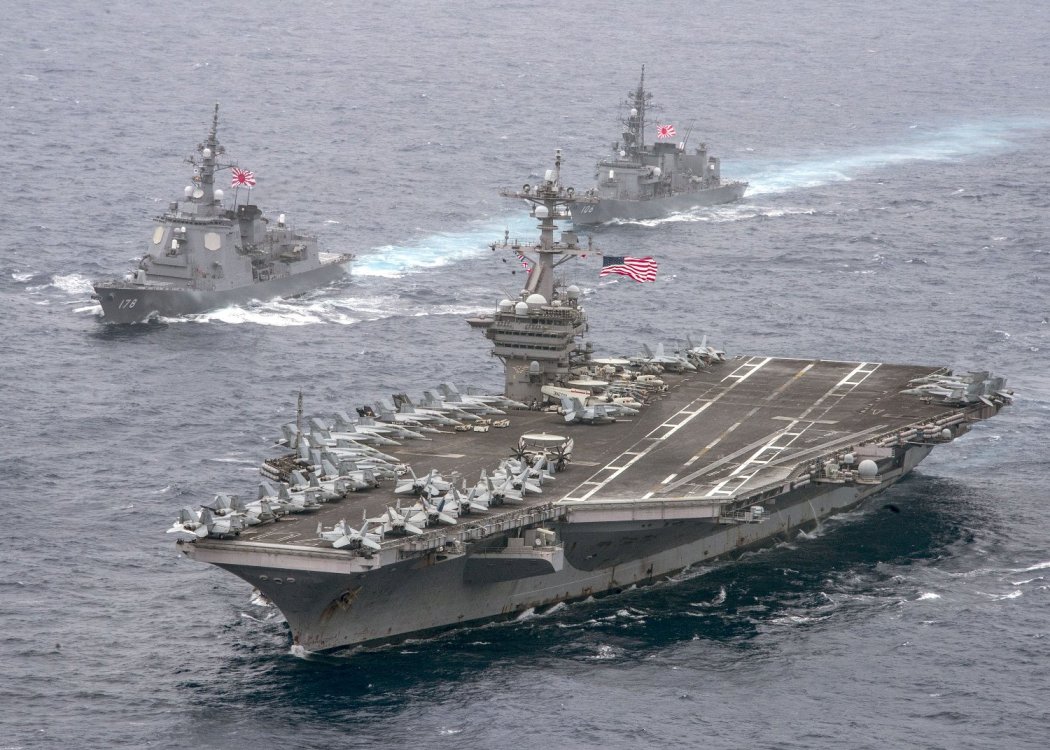 I started this series as an attempt to debunk seven myths about Japan’s national security policy. Living in a democracy, and in peace time, a number of Japanese people have understandably not given much thought to national security issues, especially the possibility and dangers of war. The consequence, however, is citizens sometimes being persuaded by false arguments from the liberal media or from domestic or foreign critics.

Myth 2: Japan’s alliance with the US is dangerous—Japan might become “entrapped” in America’s “global strategy.”

As I explained in Myth No. 1, it was Japan’s choice to forge and continue an alliance with the United States. So it is farthest from the truth to say that the US strategy of seeking local, regional, and global peace and stability is dangerous.

From the end of the Allied Occupation of Japan in 1952 to the fall of the Soviet Union in 1990, Japan faced the threats of interruption of its sea-lanes and of a possible direct invasion of its territory from a proximate nuclear-armed USSR. Just the Soviet Pacific Fleet based in Vladivostok across the Sea of Japan from Honshu consisted of 100 submarines, 40% of which were nuclear-powered and some of which carried nuclear ballistic missiles. Since the fall of the Soviet regime, Japan has faced a near-term threat from an unpredictable North Korea that’s attempting to build nuclear weapons. It also faces a medium- to long-term concern about the future of a non-transparent, nuclear-armed China led by the Chinese Communist Party.

Although the Chinese military power today have yet to equal that of the Soviet Union at the height of the Cold War, Beijing’s power has been on the rise. Its conduct has become markedly more aggressive, not only toward Taiwan, which it regards as a renegade province, but also in the East China Sea, focused on at least the Senkaku Islands, if not all of Okinawa.

The commander of the US Seventh Fleet’s Marine Corps Forces in Okinawa was once quoted as saying that the US military in Japan served as a “cork” in Japan’s bottle. He implied that if there were not US forces present, Japan would have a much larger military capability.

Japan has not kept up with the efforts of its neighbors—

North Korea, China, and Russia—to build its nuclear capability. But Japan is able to get along without nuclear weapons precisely because of the credibility of its alliance with the US, which possesses a worldwide nuclear and conventional military capability. As long as the US nuclear umbrella is credible, Japan can escape nuclear blackmail.

Since the Japan-US security relationship began formally in 1952, the United States has been involved in wars in Vietnam in the 1960s and 1970s, in the Persian Gulf in 1991, in Bosnia later in the 1990s, and in Afghanistan and Iraq since 2001. Japan’s neighbor, South Korea, did fight together with the US in Vietnam, but Japan, which saw dangers in US involvement in the former French Indochina, did not help and did not provide any fighting forces to any other wars in which the US was involved. After September 11, 2001, though, it did provide some non-combat support in the form of refueling in the Indian Ocean, road repairs in Afghanistan, and air transport logistics in the Middle East. It all ceased after the Democratic Party of Japan, took power in 2009.

Thus, rather than being dangerously entrapped in American global strategy, Japan has enjoyed the benefits of nuclear deterrence without having to possess nuclear weapons.

The US is not a cap in a Japanese bottle. Japan has not had to contemplate the need for its own nuclear weapons as a necessity to live peacefully despite the presence of unfriendly neighbors equipped with nuclear weapons. Japan has not been required to enter any war involving the United States. Particularly, Japan has not sent forces to fight in any war while enjoying the protection of its American ally. That, to me, does not sound like a dangerous “entrapment.”

Myth 1: Japan has no national security policy, and Tokyo only blindly follows the United States.

JAMES E. AUER is the President and Director of the Auer U.S.-Japan Center [AUSJC] and Emeritus Professor of Vanderbilt University.  The AUSJC hosts Japanese researchers annually at its offices on the Vanderbilt campus, conducts the annual U.S.-Japan (Defense/Dual Use) Technology Forum for American and Japanese businessmen in Nashville and, since 2004, an annual U.S.-Japan Critical Infrastructure Protection (CIP) Forum in Washington, D.C.

He served in the U.S. Navy from 1963 to 1983 in a number of positions including visiting student at the Japan Maritime Self-Defense Force Staff College (equivalent of the U.S. Navy War College) in Tokyo and serving as executive and commanding officer of guided missile ships of the U.S. Seventh Fleet. From April 1979 until September 1988, he served as Special Assistant for Japan in the Office of the Secretary of Defense.

He holds an A.B. degree from Marquette University and a Ph.D. from the Fletcher School of Law and Diplomacy, Tufts University. In December 2008 he received the Japanese Government’s “Order of Rising Sun, Gold Rays with Neck Ribbon.”

In December 2015 he was named as the first foreign recipient of the annual “Sound Opinion (Seiron) Grand Prize” by the Fujisankei Communications Group.

This article was first published at Seiron Magazine 4, 2016