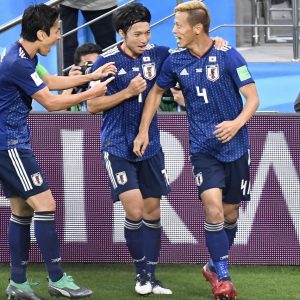 Take a bow, Samurai Blue and the Lions of Teranga.

The matchup was between Japan and Senegal, whose teams are polar opposites in style, but as nations have many similarities culturally. Both teams’ supporters were featured on news and media sites for their courtesy in cleaning up after the matches.

The game on Sunday evening, June 24, was important for both teams, as it would punch their ticket out of the group stage. As the final result would have it, however, their FIFA World Cup 2018 campaign will be decided on Thursday, June 28.

Japan and Senegal put on an entertaining and technical showcase of football on Sunday. Senegal scored early with getting deep position in Japan’s goal area. The save by Kawashima bounced on the opportune Mane to put up Senegal by 1 in the 11th minute. This was expected. Senegal’s physicality and speed would overpower Japan’s technical play.

Japan kept calm and cool for most of the first half, retaining position and finding avenues through Senegal’s defense. It wasn’t until the end of the first half when Inui leveled the score with a beautiful low shot, weaving through the defenders and finding the back of the net. This was unexpected. Japan was able to capitalize on a beautiful entry pass behind the line of defense.

Heading into second half, the score was tied at 1-1, and Samurai Blue was able to keep possession for most of the half, but found no success in scoring. Poor defensive awareness put Japan in a bad position, with Wague scoring an easy goal in the 71st minute. Senegal leads 2-1, but only momentarily. Super-sub and veteran Honda would equalize from an Inui cross 7 minutes later.

Both teams needed the win, but a draw is better than a loss. Thursday will decide their FIFA World Cup fate.

Japan exposed Senegal’s defense in the open field, and were able to creep into scoring opportunities many times. Inui and Osako could’ve netted 2 or 3 more goals given the chances they had and put their squad in a better position. Shibasaki’s long accurate passes gave the defense trouble, but too many possessions were fumbled and wasted.

Nagatomo, Yoshida, Sakai (Hiroki), and Captain Hasebe took on the Senegal offense head-on, never letting up and fighting for every possession. They have to be in sync against Poland this Thursday. Kawashima, on the other hand, is now responsible for 2 goals in his watch. The strike leading to the opening goal was easily catchable but the veteran keeper opted to deflect the ball.

When Honda entered the first game against Colombia, he immediately made his presence felt when he delivered a perfect cross that would find Osako in the center of the goal line, putting Japan up 2-1. Instant impact. Likewise in the game against Senegal, Honda’s passing can space out the field, giving his teammates the ability to run at a faster pace. Honda was at the right place at the right time, this time being on the receiving end from a cross, and scoring the equalizer.

Inui had to put his body on the line and sacrificed a yellow card. This could be potentially costly for a deep-campaign run as the Japanese striker is the team’s go-to wingman. Hasebe was also carded late in the game. Both the offense and defense will now have vulnerabilities as they have to turn down the intensity of their play to avoid getting a one-match suspension should they receive another yellow.

In the same evening, Colombia put a hurting on Poland winning 3-0. What does this mean for Japan? A draw with Poland on Thursday night would be enough to secure Samurai Blue a spot in the round of 16. The group favorite, Poland, can no longer proceed to the next round, but a win would jeopardize Japan’s campaign, pending the result of Senegal vs Colombia and the goal differential. If Colombia wins, and Senegal scores in the losing effort, Japan essentially must score more goals than Senegal on the same night. Japan should take Poland seriously, else their World Cup campaign ends early.