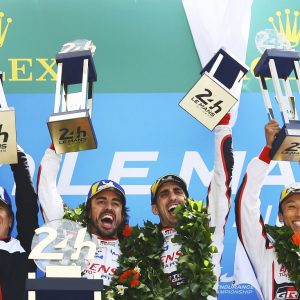 The win is certain to give Toyota the encouragement to move forward with its strategy of improving electromotive drive technology through participation in motorsports.

Nissan Motor Corporation, for its part, will enter the Formula E Championship, the fully-electric international single-seater street racing series, by the end of the year.

They too are part of the growing movement to accumulate know-how and boost name recognition of HVs and electric vehicles (EVs) through motorsports.

In the finals of the race held in Le Mans, western France, Toyota triumphed with its No. 8 TS 050 hybrid piloted by three drivers, including Kazuki Nakajima of the Toyota Gazoo Racing Team.

This is the first time that an “all-Japanese” setup—with a Japanese team representative, Japanese-manufactured machine, and Japanese drivers—has won first place in the annual endurance race.

In terms of Japan’s auto manufacturers, Toyota is the second to top the Le Mans—next to Mazda, which won in 1991 with three foreign drivers.

Toyota was the only carmaker to have participated in the LPM (La Mans Prototype) 1, the highest category in the pyramid of the Le Mans divisions. The No. 8 started from the pole position and held a wide lead over foreign teams ranking third and below from the initial phase of the race. The Toyota Gazoo No. 7, piloted by Kamui Kobayashi and two others, placed second.

The “TS 050 hybrids” used by Toyota in the latest Le Mans each had a 2.4-liter, V-6 twin-turbo engine complete with such hybrid system components as a lithium-ion battery. The fuel consumption of this newest model is said to be about 35% less than Toyota’s 2012 model in the same category.

On June 15, Toyota announced a new prototype, the “GR Super Sports Concept,” the major parts of which are based on the same designs as those of the TS 050 hybrids. Toyota says it plans to add the finishing touches to the GR Super Sports Concept, retaining the enticement of the prototype while boosting the drivability of the vehicle for market.

After the win at the Le Mans, Toyota president Akio Toyoda said the victory underscores the importance of understanding that “there is no end to improvement,” as demonstrated by those at the forefront of motorsports.

Toyoda added that, by this win, “We have taken a step forward toward developing a vehicle for the commercial market.”

Meanwhile, Nissan is scheduled to enter a series of 13 Formula E Championship races in 12 cities around the world, including New York, Paris, and Rome, starting this December and running into 2019.

With the contest characterized by runs through urban routes, a Nissan official said the company is going to make use of the championship “as a good opportunity to have people feel closer to EVs in their day-to-day lives.”