Japanese Professors Protest UN Rapporteur’s Press Freedom Assessment: Worry about your country, the US, not us 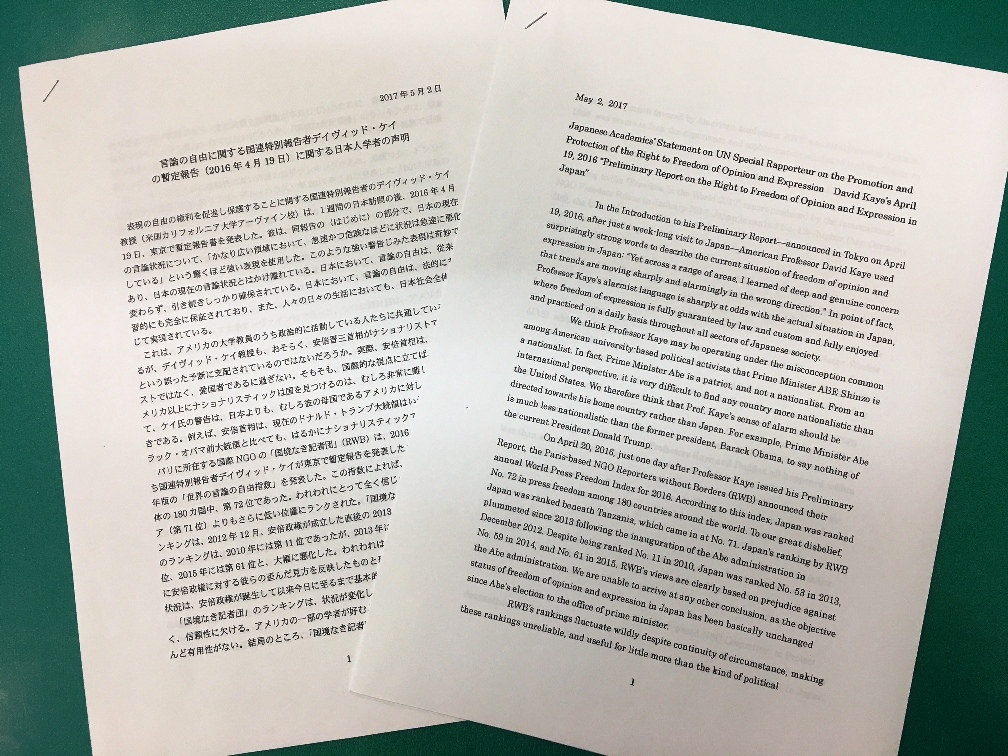 The Japanese professors contend that Kaye unfairly targeted Japan as subject of his research, placing it among the ranks of Tajikistan and Turkey. Because Kaye’s report was based on only a weeklong interviews with journalists who were chosen based on “political considerations and expediencies,” the professors say it is “sorely lacking” in academic analysis.

The professors have formed the Academics’ Alliance for Correcting Groundless Criticisms of Japan (AACGCJ). They announced that they had sent an open letter to the United Nations High Commissioner for Human Rights to tackle the unfair and biased report by the UN Special Rapporteur. 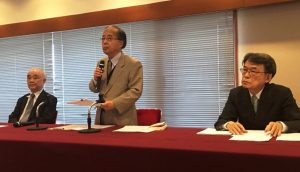 In the Introduction to his Preliminary Report—announced in Tokyo on April 19, 2016, after just a week-long visit to Japan—American professor David Kaye used surprisingly strong words to describe the current situation of freedom of opinion and expression in Japan: “Yet across a range of areas, I learned of deep and genuine concern that trends are moving sharply and alarmingly in the wrong direction.”

In point of fact, Professor Kaye’s alarmist language is sharply at odds with the actual situation in Japan, where freedom of expression is fully guaranteed by law and custom and fully enjoyed and practiced on a daily basis throughout all sectors of Japanese society.

We think Professor Kaye may be operating under the misconception common among American university-based political activists that Prime Minister Shinzo Abe is a nationalist. In fact, Prime Minister Abe is a patriot, and not a nationalist. From an international perspective, it is very difficult to find any country more nationalistic than the United States. We therefore think that Professor Kaye’s sense of alarm should be directed toward his home country rather than Japan. For example, Prime Minister Abe is much less nationalistic than the former president, Barack Obama, to say nothing of the current President Donald Trump.

On April 20, 2016, just one day after Professor Kaye issued his preliminary report, the Paris-based NGO Reporters Without Borders announced their annual World Press Freedom Index for 2016. According to this index, Japan was ranked No. 72 in press freedom among 180 countries around the world. To our great disbelief, Japan was ranked beneath Tanzania, which came in at No. 71.

Japan’s ranking by RWB plummeted since 2013 following the inauguration of the Abe administration in December 2012. Despite being ranked No. 11 in 2010, Japan was ranked No. 53 in 2013, No. 59 in 2014, and No. 61 in 2015. RWB’s views are clearly based on prejudice against the Abe administration. We are unable to arrive at any other conclusion, as the objective status of freedom of opinion and expression in Japan has been basically unchanged since Abe’s election to the office of prime minister.

RWB’s rankings fluctuate wildly despite continuity of circumstance, making these rankings unreliable, and useful for little more than the kind of political maneuvering much favored by American academics. RWB was established in Paris in 1985, and seems to lack the experience and sophistication needed to lend credibility to their reports. A narrow-minded, short-sighted play for political gain seems to be much more apropos in explaining the RWB rankings than is any grounding in objective fact.

Fortunately, a much more reliable world freedom ranking is available. According to the “Freedom in the World 2017” report produced by the international NGO Freedom House in January 2017, Japan is ranked No. 12—higher than Germany (16), the UK (17), France (27), the US (28), and Italy (29). Freedom House was established in Washington, DC, in 1941, making it more than twice as established as RWB. Accordingly, Freedom House’s world rankings are stable and evenhanded, in stark contrast to the oscillations and biases painfully evident in the RWB reports.

On May 12, 2016, just a few weeks after the release of his preliminary report in Tokyo, Professor Kaye and University of Connecticut professor Alexis Dudden held a two-person open dialogue titled “Threats to Freedom of Speech in Japan” at the University of California, Irvine. The event was hosted by the Journal of Asian Studies (JAS), which is published by the Association for Asian Studies (AAS).

Professor Dudden is notorious as a lifelong Japan basher with deep animus toward Prime Minister Abe. In May 2015, Professor Dudden famously used the AAS as her platform for mounting yet another attack on Prime Minister Abe. Professor Kaye thus seems to be in complete alignment with two of the most prominent anti-Japan extremists in the world, RWB and Professor Dudden. This trio is clearly working in tandem to attack Japan: UN Rapporteur Kaye’s preliminary report, the announcement of RWB’s ranking in 2016, and the debriefing summit between Professors Kaye and Dudden all happened within less than a month of each other, between April 19 and May 12 in 2016.

From April 21 through April 29, 2016, the Asahi Shimbun, considered by many to be the most “liberal” daily newspaper in Japan, published interviews with seven newscasters representing every major Japanese TV broadcasting network. In these interviews, not one newscaster replied that he or she had ever experienced external pressure to change his or her reporting or views. Not one of the seven major newscasters was anxious about the current situation of freedom of opinion and expression in Japan. These interviews are so diametrically inconsistent with Professor Kaye’s report as to introduce a dilemma: either the liberal Asahi’s reporting is incorrect, or Professor Kaye’s rapporteur work is.

According to the independent New York-based NPO Committee to Protect Journalists (CPJ), 802 journalists have been murdered since 1992, 259 journalists were imprisoned in 2016, and 452 journalists have been forced into exile since 2010. In Japan, one reporter with the Hanshin branch of the Asahi Shimbun was killed in May 1987. But this was a tragic and extremely isolated anomaly. Incidents of violence or intimidation against journalists in Japan are almost universally unheard of. Completely contrary to Professor Kaye’s Preliminary Report, we are very proud that Japan’s current situation of freedom of speech remains at the very top level, making Japan a world beacon of free expression and investigation.

We in the free and democratic world are now facing great challenges from big countries lacking freedom of opinion and expression, such as Russia and the People’s Republic of China. Moreover, more and more countries and regions—such as Turkey, Poland, Hungary, Venezuela, and Hong Kong—are also rapidly losing their freedoms of expression, making the protection of free speech the most important challenge confronting those fortunate enough to live in havens of unfettered reporting.

Shutting his eyes to these threats, however, Professor Kaye, after becoming UN Special Rapporteur on the Right to Freedom of Opinion and Expression in August of 2014, selected three countries as his research objectives: Tajikistan, Japan, and Turkey. Had Professor Kaye any comprehensive understanding of human rights, he would not have selected Japan as one of his research targets. As Professor Lagon pointed out, China, Russia, Iran, and Saudi Arabia would have presented Professor Kaye with actual substantive threats to free expression waiting to be brought out into the light.

Indeed, these countries are not content to restrict the freedoms of their own people, but are actively exporting anti-democratic repression throughout the world. For example, the eight-page China Watch is now distributed monthly to overseas readers as an insert in the New York Times, the Washington Post, the Wall Street Journal, the Daily Telegraph, the Financial Times, the International Tribune, Le Figaro, and the three major media outlets in Australia, including the Sydney Morning Herald. China Watch is published by the Beijing-headquartered China Daily, which is China’s national English-language daily newspaper also boasting the largest circulation.

The contents of China Watch are considered to be largely controlled by the Chinese government. We are therefore very much afraid that these Western media are assisting the Chinese government’s propaganda efforts in exporting its sanitized and distended version of events. As a consequence, China—which guarantees no freedom of speech at all—directly exports its repressed “journalism” to people in the free and democratic world through the above-listed prominent Western media outlets. We harbor grave doubts about the discernment and ethics of Western newspapers acting as stage and accomplice for the dissemination of Chinese propaganda abroad.

The post of UN Special Rapporteur was designed to address precisely this kind of pressing problem. Professor Kaye’s preliminary report, however, was made based on his interviews with a limited number of journalists when he visited Japan for just one week. The choice of journalists lacks balance, and was made according to political considerations and expediencies. As a result, the academic analysis in his preliminary report is sorely lacking.

As it stands now, we are seriously concerned that UN Rapporteur Kaye’s report might become a second Coomaraswamy Report, which was submitted to the UN Commission on Human Rights in 1996. The Coomaraswamy Report is replete with many grave errors of fact. And yet, because of the report’s association with the United Nations, these grave errors have come into currency throughout the world. As a result, the dignity of Japan and the Japanese public in the international community has been immensely damaged for more than two decades. We request that the United Nations Human Rights Council (UNHRC) withdraw the Coomaraswamy Report and appoint a new UN Special Rapporteur on the comfort women issue in order to draft a new report free from factual error.

We request that UN Special Rapporteur Professor David Kaye submit a very fair and impartial final report on freedom of opinion and expression in Japan, based squarely upon objective facts, at the coming UN Human Rights Council meeting in Geneva in June 2017.

46 Signers of the Statement