The Sword and Its Importance in Japanese Culture

Photo: The Ama-no-Saka-hoko standing at the peak of Mount Takachiho in Miyazaki prefecture, Kyushu

These are an excerpts from the forthcoming book National Treasure Swords of Japan by Paul Martin.

The sword and the mythical origins of Japan are inextricably connected; one cannot tell the story of one without mentioning the other. To try to explain the importance of swords within Japanese culture one must inevitably start at the beginning.

Japan’s oldest extant myth-histories, Kojiki (Record of Ancient Matters, 712), and Nihon Shoki (Chronicles of Japan, 720) contain the creation myths of Japan. Though both works were completed in the 8th century (work began in the 7th C.), the myths that are recorded in them are thought to have been compiled from histories dating much earlier that had been passed down by mouth within the various clans. They recount how the male and female gods Izanagi and Izanami created the islands of Japan by stirring the ocean brine with a heavenly jeweled spear.

What be can concluded is that at the time of this myth’s origin spears and swords were considered divine objects. Along with the sacred mirror and the jewel, the sword is part of the imperial regalia even today. The importance of swords and spears is also reflected in the ceremonial traditions of the era, with burials of large amounts of ceremonial swords and spears as offerings, and their inclusion in ancient Kofun period (250-552) burial tombs where they had been carefully placed in close proximity to their owners.

The story of the sword that compromises one of the imperial regalia is included in both Kojiki, and Nihon Shoki. It involves the storm god Susano-o no Mikoto slaying the eight-headed and eight-tailed giant serpent called Yamata-no-Orochi whilst saving Princess Kushinada-hime. Susano-o made the serpent drunk with sake, then killed it. Then when he cut open its multiple tails, he found a sword (known as Ama no Murakumo no Tsurugi, or The Heavenly Gathering of Clouds Sword). Susano-o gave the sword then known as the Ama–no-Kumo-no-Tsurugi, to his sister Amaterasu-no-Omi-Kami (the Sun Goddess, and patron deity of Japan) as a token of repentance for his bad behavior in upsetting the lands of Japan. 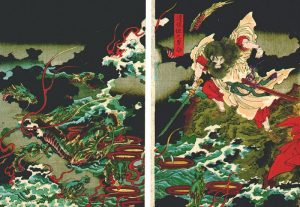 Amaterasu later gave the Ama no Murakumo no Tsurugi to her grandson Ninigi when he came down to earth, descending to the peak of Mount Takachiho in Miyazaki prefecture, Kyushu. The spot is still marked today with an over-sized three bladed up turned spear called the Ama-no-Saka-hoko standing upright from a pile of large rocks, and is said to have been left there by Ninigi himself. It has been there for an undetermined amount of time and was famously visited by the 19th century samurai Sakamoto Ryoma.

Ninigi also brought with him a sacred mirror (Ya’ata Kagami) and the sacred jewels (Mi-Kura-Tana-no-Kami). These three treasures came to be known as the imperial regalia: symbols of imperial authority and legitimacy, providing the link between the imperial family and their divine ancestry. It is said that he gave these items to his great-grandson, the first emperor, Jinmu as evidence of his heavenly right to rule.

The sword, the Ama-no-Murakumo-no-Tsurugi, was to symbolise the authority of the imperial family and is said to reside still in Atsuta Jingu shrine in Nagoya. The sword is only allowed to be seen by certain priests and members of the imperial family. As many straight swords, many imported from the continent, have been discovered in Kofun tombs (Kofun period 250 CE- 552 CE), along with mirrors and magatama it is conjectured to be a straight blade from China or Korea that was probably imported to Japan in or around the 3rd century.

The Ama-no-Kumo-no Tsurugi reappears around the 3rd century in the stories of crown prince Yamato Takeru. According to the Nihon Shoki, Ise shrine was established by Yamato-hime no Mikoto, the daughter of the legendary Emperor Suinin (R. 29 BCE to 70 CE) as a residing place for the Imperial Regalia. She later loaned the Ama-no-Murakumo-no-Tsurugi to her nephew Prince Yamato Takeru no Mikoto when he was leaving to conquer lands to the east. In one famous account, Prince Takeru hid in long grass from his enemies who had surrounded him. When they set fire to the grass in order to flush him out, he used the sword to cut down the grass and escape. From this time onward the sword was to be known as the Kusanagi-no-Tsurugi (The Grass Cutting Sword). 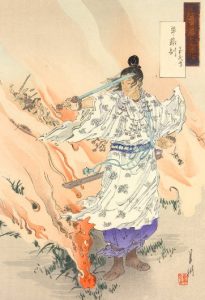 Stricken by illness inflicted by the Kami of Mount Ibuki, Takeru died on the Plain of Nobo, Ise. On this occasion, he had left the Kusanagi-no-Tsurugi with his wife, Princess Miyazu. Miyazu took the sword and founded Atsuta shrine (in present day Nagoya). The sword is said to remain in Atsuta shrine to this day.

The sword was the subject of controversy in 1185 at the Battle of Dan-no-Ura, the final confrontation between the Taira and the Minamoto forces. According to the Azuma Kagami, realising their imminent defeat the young emperor Antoku’s grandmother, Taira no Tokiko, tucked the imperial jewels into the folds of her kimono, and the sacred sword into her belt. She then took Antoku into her arms and jumped into the sea. The imperial jewels miraculously floated to the surface and were rescued. The sword and the emperor were never to be seen again.

Legend has it that the jewels miraculously floated to the surface and were saved but the sword was lost. However, it is yet to be affirmed that the sword lost was the original Kusanagi no Tsurugi. According to Kitabatake Chikafusa in the Jinno Shotoki, the original Kusanagi-no-Tsurugi never left Atsuta shrine, and the sword lost at Dan-no-ura was a copy ordered by Emperor Sujin (R. 97~30 BCE.) for emperors day to day wear.*

This mix of mythology and fact still resonates very strongly with the Japanese today. The Kusanagi-no-Tsurugi is the evidence of the emperor’s direct lineage from the gods. Although it is never seen, a sword reported to be the Kusanagai-no-Tsurugi is used in the ascension ceremonies of new emperors.

Paul Martin is a former British Museum curator, and a secretary of the Nihonto Bunka Shinko Kyokai (NBSK). He is also an appointed Bunka Meister (Master of Culture: Japanese Swords) by the Japonisme Shinko Kai (Honganji).

*Kitabake Chikafusa, the great grandson of Kitabake Masaie, was born in 1293, and succeeded the headship of a branch of the Murakami Genji, and became Dainogon in 1324. Paul H. Varley, Trans., A Chronicle of Gods and Sovereigns: Jinnō Shōtōki of Kitabatake Chikafusa (New York, Columbia University Press, 1980)