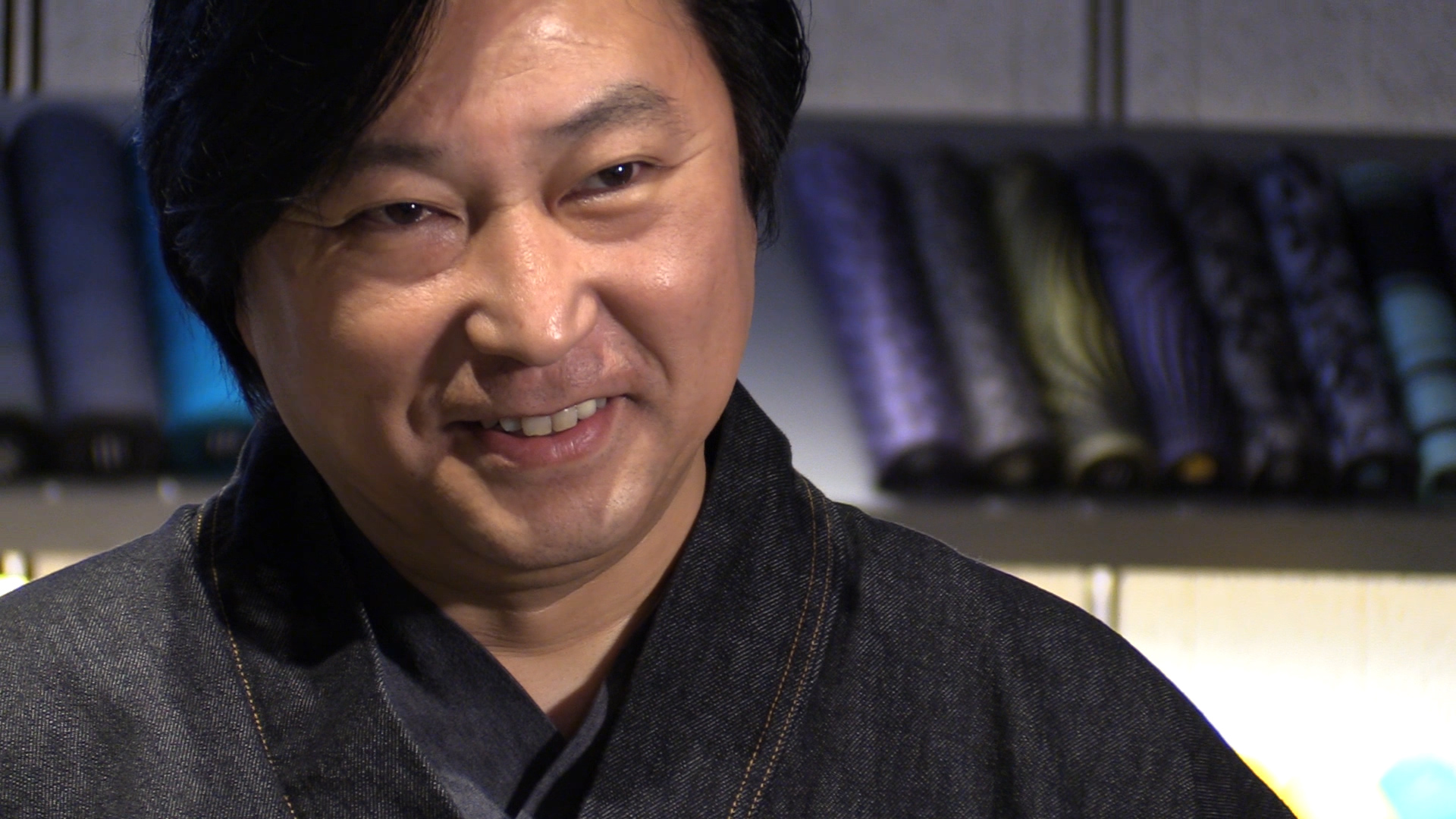 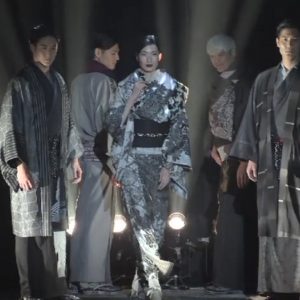 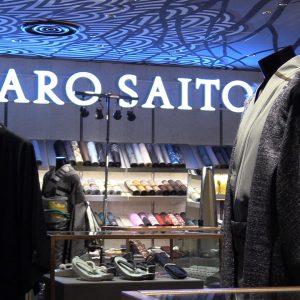 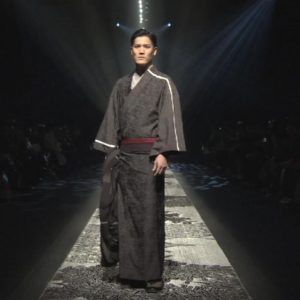 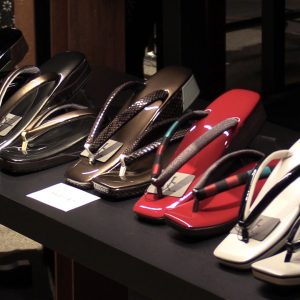 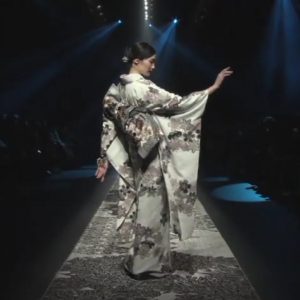 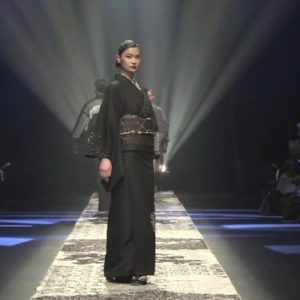 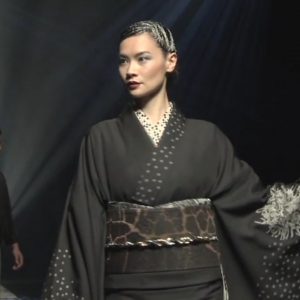 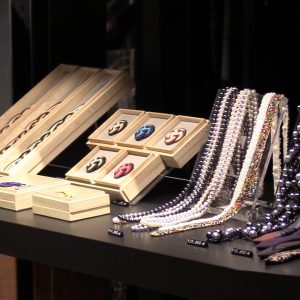 Jotaro Saito doesn’t go unnoticed when walking down a street. The day I met him at Kanda Myojin, he was sporting a flashy patterned kimono, which might well have caused passersby to do a double take: an elegant jeans fabric in a beautiful black and white pattern.

For foreign visitors, the common perception of Japanese kimono experience seems to be kimono rentals. More adventurous visitors might buy a yukata, the lighter summer kimono, but it often stops there.

Japanese themselves often have kimonos passed down in their family, but they might have little chance to wear one.

In this context, Jotaro Saito is breaking conventions to bring back the kimono as fashion for today’s world. At JAPAN Forward we sat down with this designer to hear how he started out.

It doesn’t come as a surprise somehow to find out that this designer — bursting with creativity — comes from Kyoto. He even joked with us: “Kyoto is always bursting with ideas. To some extent, Tokyo can be more conservative.”

Saito explains how he comes from a family of kimono dyers in which each generation sought to innovate further and bring something new to the industry.

“I suppose I come from a family of innovators. It was my grandfather who first put his name to the brand. Then, my father was the first one to propose the kimono as a holistic design. Before, you would sell either the obi or the kimono fabric, but he proposed coordinating both together.”

Then came Jotaro Saito, who broke convention from the start by having his debut at the young age of 27. He explained the idea behind his contribution. “To meet the new age, I wanted to make a kimono which wasn’t old, but was cool, new, and something which everyone wanted to wear.”

As many designers are aware, not all roads to success come in a straight line. Jotaro Saito’s experience is no different.

“Traditionally, in the kimono business, if you are making kimonos you are not supposed to sell directly to the consumer. But with the new age of the internet, shopping was changing. So I realized that we had to change the way we marketed to reach the end user,” he said.

Then came a big break. The Mori Building, where the shop was opened in 2011, was interested in featuring Saito’s vision of a new way of designing kimonos.

It was through the Mori Building connection that Jotaro Saito came to open his new shop in the brand new and glossy GINZA SIX complex, smack in the middle of what is commonly known as Tokyo’s most elegant shopping district.

Saito has participated in Mercedes-Benz Fashion Week since 2006, the ultimate sign of his intention to have his designs seen as fashion for today. However, he admits, even that hasn’t always been such smooth sailing.

“It’s tricky because the kimono, for example, doesn’t have its own section in fashion magazines. It’s not as much in the media. So when the fashion show would come and the selection process would start, inevitably there would be the debate, ‘Is the kimono even fashion?’”

Jotaro Saito told us he didn’t lose faith, however. And in recent years the debate has been changing.

“For example, especially during Amazon Fashion Week, you have young designers from Cambodia who present designs which, like Ao Dai (the Vietnamese traditional dress), also are not well-accepted. But surely that’s fashion, isn’t it? So, one step at a time, I think the kimono is starting to be recognized as fashion.”

How Far Should the Kimono Change?

In light of the appearance of kimonos as souvenirs at airports and kimono-inspired designs becoming commonplace in Western fashion, it’s becoming easier to buy kimono-like apparel in the commercial marketplace. The question then becomes what should be kept the same and what in fact can be changed when it comes to kimono design.

“The kimono doesn’t belong in a museum. I always get a bit of a strange feeling when someone suggests something like that,” said Saito, looking a bit puzzled. “I think because it’s a piece of clothing which has both tradition and innovation to it, there are some aspects which is acceptable to change, and others which is not.”

An example? He explained: “Well, the kimono is a way of expressing one’s own individuality. It’s not anime, and it’s not cosplay. So we are always very conscious about whether it’s okay for something to change, and what should stay the same.”

Saito chooses not to sacrifice things such as the length of the kimono or its sleeves. This doesn’t mean that he isn’t willing to try new things, however.

When you walk into his shop, your senses are hit by colorful, elegant patterns not usually associated with kimono. Gazing around, one sees fur overcoats, polka dot obis, and denim kimonos. There are even boots and more modern footwear for those wanting to mix different styles.

Explaining his choice of denim fabric in particular, Saito told us: “Jeans use a fabric everyone knows, and everyone is comfortable with. That’s why I chose it.”

Saito, while breaking conventions in the field of clothing, is also using the craftsmanship of kimono design for other purposes, including art and interior design. In fact, one of his most recent projects was an immense brocade piece in front of the Kanda Myojin Edo Cultural Complex known as EDOCCO.

He elaborated: “We would use the same machinery for weaving obi, but the speed is different, and we would use special thread. And while kimono fabric is often based on the repetition of patterns, this artwork is more to do with creating a singular design. So, although they have in common the fact that the fabric is woven, the final product is completely different.”

In his shop in GINZA SIX, stunning fabrics are used as doors to the changing rooms, and even on the seats of the cafe. His designs are visibly spreading in popularity as, for example, major hotels in Tokyo like the Ritz Hotel have them.

“The advantage of these types of designs is that because they are not clothes, they exceed borders and can be used everywhere,” he added.

The Future of Kimono Design

In the future, Jotaro Saito is moving in different directions to spread Japanese culture abroad. “I am not at liberty to say, but there are plans to do fashion shows abroad, for example.”

While juggling interior design and fashion at home and abroad, it seems that the path for Saito is increasingly moving toward a foreign audience. “I want to be part of the movement spreading ‘Made in Japan’ to the world.”

He explained the reason for his work, and how Japanese themselves should be the first to appreciate their own culture. “I think abroad it’s increasingly difficult to find one’s own roots. Japan has many aspects coming from Chinese culture, but also aspects which have come to Japan and developed in new and interesting ways. I think that is something beautiful and something which Japanese should notice more.”

I recommend keeping your eyes peeled for Jotaro Saito’s next moves at home and on the world stage. For those in Japan, check out his collection at Amazon Fashion Week on March 20.