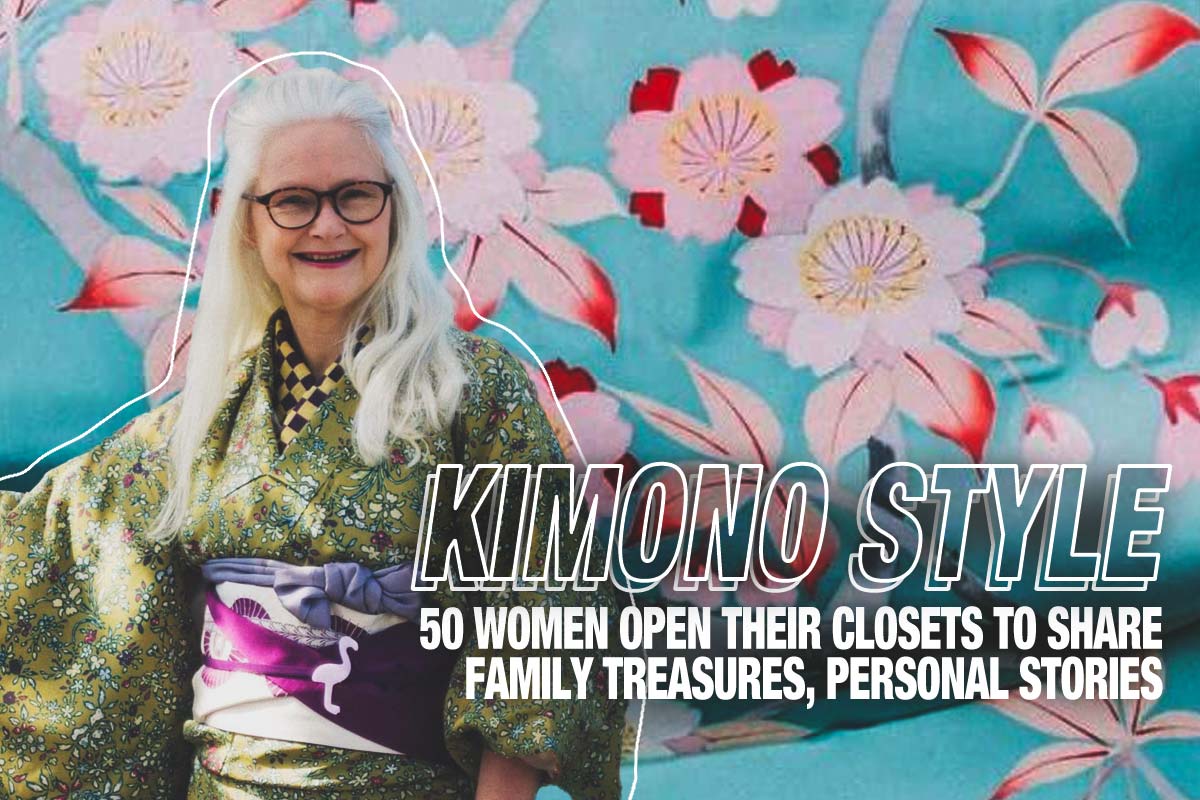 The kimono closet research project grew from what I had been thinking about when I did my Ph.D. in England. I encountered a new sub-genre of fashion studies called Wardrobe Studies. Instead of focusing on fashion designers or the processes and marketing of the fashion industry, it focuses on the end user, usually women, and their relationships with their clothes.

From shopping with a clothing consultant, to thrifting or hand-me-downs, there are many ways to acquire clothing. The way that clothing is kept also varies greatly from person to person. While some people separate by formality of the garments, others separate by seasonality or even by color.

How clothes are dealt with after they are no longer wanted also varies from person to person. Some are just discarded into the garbage, while other people take them to charity shops or sell their old clothes online.

There is a lot that can be learned from how people interact with their clothing, and clothing embodies many meanings that are not apparent at first glance. In other words, clothing can have far more meaning than that which is embodied by just being a piece of cloth.


The Many Means of Acquisition

In Japan, women have the role of looking after the family’s kimono. They are considered to embody family history. They are often handed down in the way that jewelry might be in the West, and therefore they are considered precious and have to be carefully kept.

Many women have also bought kimono with the help of large loans, often being told that these kimono are a good investment. The reality is that the resale value of most kimono is negligible. Other women were given a trousseau of kimono upon their marriages.

Many women place high value on the family collection of kimono, even if they are never worn. Other women are wearing the kimono in the house, and through that practice are making connections with other family members. Still others are buying their own kimono because they like to wear it, and are not concerned with the other aspects of kimono history.


Kimono in the Closet

Wardrobe Studies is a new area, and I was sure that no one had studied the kimono collections of Japanese women. I felt that there were lots of stories to be told and things to be learned from listening to their stories.

I worked with an assistant, Kumi, and a photographer, Todd. Kumi and I each conducted half the interviews. Todd took photographic documentation of every interview. I hope to be presenting this research, and eventually produce a research paper from it.

I interviewed my partners in the project to find out what they learned from doing it, including asking them why they got involved and what was interesting about the project. Also, I wanted to know what was difficult and what they learned, as I felt this was a unique and very special experience for all of us.


Finding the Faces Behind the Stories

Kumi said that she saw lots of people put up kimono pictures on SNS, but she was really curious to find out what was in their closets. It’s a reality we could rarely see. She loved to listen to people’s stories, to hear the real voices of the women talking about their kimono.

She also noticed that it was difficult to recruit older women. For them, showing their kimono meant revealing some information about the household economy, and most were not willing to do that. Younger people, who were buying mainly used kimono, did not have that feeling, and it was easier for them to agree to be interviewed.

Kumi felt she learned a lot from this experience, and would like to see this research presented so people would know about Japanese women and kimono ー and not just think of kimono as beautiful photos of young women.

Todd had been working on the photographs for my book The Social Life of Kimono (Bloomsbury Academic, English, 2017), and was happy to be asked to do another project. He was enjoying photographing kimono, so he didn’t hesitate when he had the chance to go and photograph people’s kimono collections.

He was amazed by the immense variety of the kimono that we photographed, and also by the different stories people told. Some people had just a few kimono that were very precious and expensive, or were heirlooms that they would never wear, but they were happy just to be surrounded by these precious garments.

Through the project Todd came to love kimono more. But he also began to realize that sometimes women have a complicated relationship with their kimono. They love them, but don’t always know where or how to wear them. They are afraid of making mistakes and of somebody saying something critical, so they don’t wear them. He feels this issue needs to be addressed, or kimono will not thrive as a part of Japanese culture.

For me it was an immense privilege to go into these homes and see the kimono, and listen to the heartfelt stories of the women who were charged with their care.

I enjoyed immensely the incredible collection of a woman over 80 who had an enormous collection and kept on buying kimono for her daughter, but the daughter would never wear them. I was also moved almost to tears by the woman who had lost all her family and had almost none of her own possessions, but just kept her mother’s kimono closet, virtually her only furniture apart from a folding table.

Every story iss unique and beautiful. I have also become aware of the gap between the age groups when it comes to the way of acquiring, keeping, and using kimono.

There is so much to be learned from our relationship with our clothes. I want to introduce several of the participants in the weeks to come. I hope you will enjoy meeting them, and hearing their unique stories.

Find other columns on kimono by author Sheila Cliffe here.