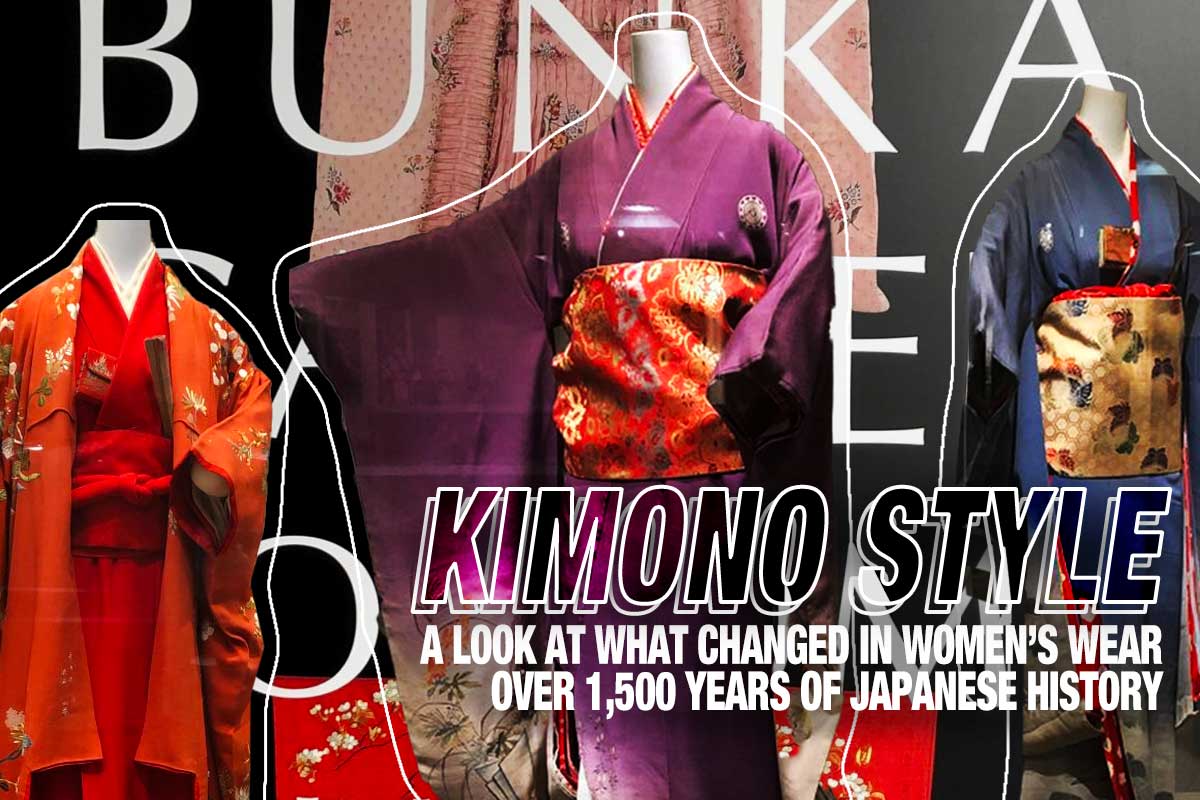 The exhibition that opened on July 15 at the Bunka Gakuen Costume Museum is an absolute gem for anyone interested in Japanese historical dress or kimono. Held in conjunction with the Kyoto Dyeing and Weaving Cultural Association, it traces women’s dress from 1,500 years ago to the Meiji period through reproductions of the clothing in each age.

Each one of the reproductions, made between 1930 and 1933 for a dyeing and weaving festival in Kyoto, is a work of art in its own right. Almost a hundred years old, they are now delicate and reaching the end of their lives. These garments have been constructed carefully with the aid of historical textile researchers, using only the dyes and weaving techniques that would have been used in each age. For that reason, unlike cheap imitations, they provide us with an amazing window into the clothing of each age.

It is notable that the costumes are displayed in the round rather than merely being hung on stands, and this helps us to understand how they would have looked on the women of the time.

These garments have never been shown in Tokyo before, so this is a very special chance to see them.

Taking the Perspective of Dyers and Weavers

The dyeing and weaving festival was held in Kyoto from 1931 to 1937, but it stopped because of the war. The garments were paraded once more in 1984 to celebrate the 330 anniversary of the birth of Yuzensai, the legendary fan maker who is thought to have started decorating kimono with yuzen dyeing from around 1700. Kyoto geisha were the models for the parade at the time.

The later Edo and Meiji period kimono shown in the lower gallery are from Bunka Gakuen’s own collection, and many are from the Mitsui family of successful merchants. This section of the exhibition also has samples showing how various techniques are used to make fabric, such as shibori.


Kimono ー Changing with the Times

The 3rd to 7th Century (about 300-710) Kofun era garments show a simple kimono-like garment dyed with a triangle pattern under a long, pleated skirt-like garment called a mo. The mo is held on with a long ribbon-like tie, and closed into a bow. The fabrics are light and gauzy and the dyes are plant dyes, mostly plain or in stripes. Very simple flower designs are also painted onto the garments, and a long cloth ー like a shawl ー is worn over the shoulders. Women wore a string of beads over the garment.

In the Nara period (710-794), the strong influence of China can be seen on the garments. The colors are deeper and brighter, and patterns more complex. There is kyokechi tie-dyeing, brocade weaving and embroidery. A round-necked sleeveless tunic is worn over the kimono-like garment, and a very long shawl is worn on top. The sleeves are excessively long, completely covering the hands. Colorful hair pins are also worn.

The Heian era (794-1185) is often considered the high point of Japanese dress. In the exhibition, it is represented by the gorgeous Junihitoe. This one was worn by a member of the imperial family, and it is a stunning garment showing the multiple layers and the karaori woven jacket with a white mo flowing out behind.

Unlike the garments of earlier eras, this one is obviously very heavy with its karaori jacket and rich woven layers. In fact, it is not designed for moving in at all.

There is a huge simplification in style between the Heian and the more military and feudal Kamakura era (1192-1333) that followed. A long coat is worn over a simple cream kimono with a pattern of cherry blossoms. The garment has a red tie worn over it, which is called a kakeobi, and is worn over the shoulders when going to a shrine.

A small boxlike brocade item called a kakemamori is hung around the neck, also worn when going to the shrine. Large straw hats, often with veils, were also worn in this period.

The other outfit shown is of an assistant, a lower class of woman, and her kimono is decorated with simple dyeing rather than brocade layers.

The Muromachi (1336-1573) and Momoyama (about 1568-1603) periods are marked by an increasing complexity of dyeing techniques including the rise of tsujigahana. This is an incredibly sophisticated way of dyeing complex shibori patterns in conjunction with ink painted flowers. The subtle greens, browns, purple and yellows are harmonious, and the kimono is stunningly separated into sections of checks, tie-dyed leaves and subtly ink-drawn flowers.

These periods also saw the use of surihaku, pasting on patterns of gold and silver leaf, and the designs moved gradually to the shoulders and hem, leaving a more plain area in the middle.

Early Edo Keicho kosode have the kimono divided into large colored sections which are decorated with tie-dyeing, embroidery and surihaku. After 1640, the obi emerges for the first time, and kosode begin to have one large design diagonally across the whole garment.

Ogi moyou, fan patterns, both folding fans and flat circular fans, began trending around 1700. Designs seen on fans would be seen inside sections separated by tie-dyeing, including patterns such as seasonal flowers, which were worked in embroidery. The story goes that the famous fan-maker Yuzensai, used his paste and painting techniques for fan making, applying it onto actual kimono, giving birth to the yuzen dyeing technique which is now standard for the dyeing of formal kimono.

Colorful painted patterns all over the garments return in this time period, but the popularity of yuzen was spread by the townspeople, who were forbidden embroidery and tie-dyeing. The samurai and upper-classes, however, preferred the embroidery, tie-dyeing and surihaku techniques.

From about 1720 the designs on kimono split into upper and lower parts as the obi becomes more prominent. Most of the design is confined to the lower area, which is also where we see most of the design on formal kimono today.

As the sumptuary laws began to bite, the clothing of townspeople became increasingly dull, with small patterns in yuzen near the hem on beige and grey kimono. The upper classes continued to wear bright colors with rich embroidery and bright brocade obi.

Grey was trending into the Meiji period (1868-1912), along with blue and purple. Designs continued to be small and confined to the hem area for ordinary people.

The Mitsui family kimono were the garments of a very successful family, and they are correspondingly gorgeous in spite of their being of the trading class.

I have read more than once in fashion books about the ‘unchanging kimono’. I wonder if any of those researchers actually looked into historical garments at all. If there is anything that this exhibition demonstrates it is the enormous variety of trends and constant introduction of new techniques and pattern placement in the kimono.

An incredible love of color and pattern make this exhibition a feast for the eyes. Even the early and less sophisticated garments are stunning in their beauty and balance.

The exhibition runs until September 28th, so don’t miss the opportunity to see this unique collection of garments.

The current exhibition, 1,500 Years of Women’s Dress, runs from July 15 to September 28, 2021. Information about the exhibition can be found (in Japanese) at this link.