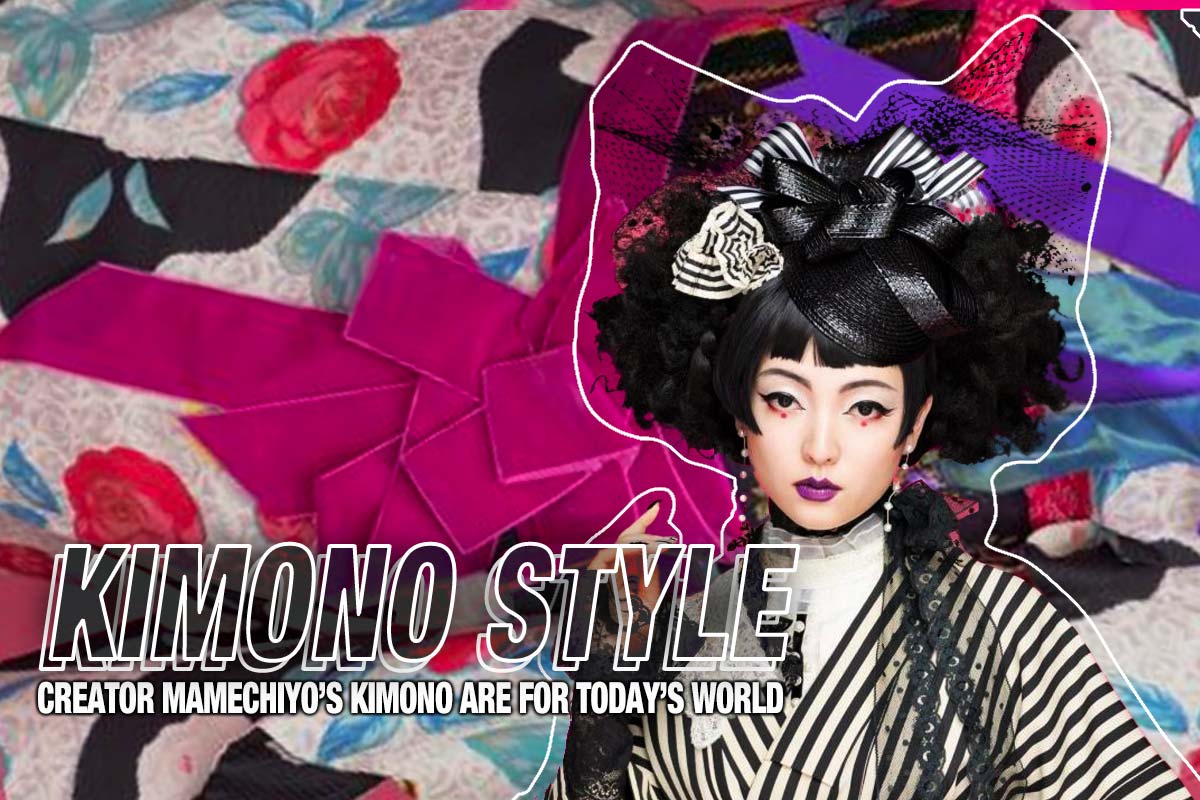 Mamechiyo, like myself, fell in love with kimono at a flea market. She began to buy and sell them at rental galleries along the JR Chuo line.

In 2000, she opened a small vintage kimono shop in Nishi Ogikubo. Of course, I visited it. She became aware that many women loved the Taisho period kimono she was selling, but they didn’t buy them because they were too small.

Then, in 2003, she published a book which was revolutionary for the time. “Mamechiyo’s Kimono Modern” showed photographs of Mamechiyo in kimono sitting in a launderette, or a CD shop ー in everyday spaces, wearing her Taisho era kimono.

She had pop accessories, and the whole book was designed with a retro attitude. At the time there were few casual kimono photographs being published, so the book had a revolutionary feeling to it. It was before the days when everyone was wired.

In 2003 Mamechiyo also started her new brand and shop, “Mamechiyo Modern,” in Nishi Ogikubo. Her brand signature style was to reproduce the designs of the Taisho period on larger sized kimono, in easy to care for polyester. She had a customer in publishing, Tanabe Mayumi, who loved “Mamechiyo Modern,” and a new mook, (magazine book) Kimono Hime (Shodensha, 2003) was born.

This book spread the aesthetic of Taisho kimono among young people. It was also unique in its design, like a graphic and stylish fashion magazine, rather than a kimono magazine. It was popular with designers and artists as well as kimono fans.

Mamechiyo says that both culture and subculture are important, and she is interested in (and working with) both. If there is no culture, there is no subculture, so both are necessary for culture to stay healthy.

She is also interested in European culture, especially in the textiles and patterns of the Netherlands. She would incorporate a European feeling into her kimono designs, tulips, lace, rabbits and ribbons, and top it all off with flowered headdresses.

Mamechiyo’s interest in all kinds of culture is evident in her collaborations with many different companies over the years. She has worked with Blythe Dolls, Shu Uemura cosmetics and many others, and has taught about kimono on NHK (national television) Oshyare Koubou, and at Waseda University.

Mamechiyo went from strength to strength, opening a shop in Marui in Shinjuku in 2009. Then in 2011, she moved to Amsterdam and continued her activities from her European base.

She says that she could feel Edo in the city of Amsterdam. The center of Amsterdam is cut up by canals, and the speed of the center of the city is the speed of a bicycle. Mamechiyo imagines that Edo moved at a similar speed, and that many goods were moved on the canals that were carved into the city.

She stayed in Amsterdam until 2019 and she says that her time there taught her a lot about color and design, about kimono fitting into architecture and environments, and also about the meaning of happiness.

While she was there, her work did not escape the notice of the major European museums, and in 2012 she had a piece chosen for the Victoria and Albert museum’s exhibition “Kitty and the Bulldog” which highlights the subculture of Japan and the UK.

In 2015 she made a kimono with a Van Gogh painting on it for the Van Gogh museum shop. Her kimono in the Victoria and AIbert museum was displayed again in 2020 for the “Kyoto to Catwalk” exhibition.

In Amsterdam she did some stunning photo shoots of her works. This involved bringing a whole team of experts from Japan for doing hair, make-up, lighting and photography. She said that the results look a lot of fun, but the shoots were incredibly hard work, everyone staying up through the night to practice and get the looks perfect.

In 2021 Mamechiyo closed her shop in Marui, and is now concentrating on her online shop. She is purposely keeping the business small so she can control what happens and do what she loves. She will also hold pop-up shops periodically. She is open to having her work displayed in other outlets or kimono shops.

Until now, all kimono have been pret-a-porter, but she is changing her direction a little. She is now interested in making couture one-off items for individuals, and in having a personal relationship with her customers.

We met at her collaboration pop-up shop with the hat designer Keiko Igata. She told me that kimono is inclusive, and it welcomes everyone. It connects with life and with place and with architecture.

It is culture, but she wants to make kimono for now, and kimono that people want to wear. It can be a way of self-expression and it has the power to lighten one’s feeling, even in this time when it is difficult to go out.

Mamechiyo showed me her obi made with reused kimono fabrics, with the addition of sequins and embroidery. They are strengthened with polyester linings. She also showed me her new 3D ribbon obi. Just by tying a regular drum bow, it looks like a huge ribbon on the wearer’s back. In black satin, this obi could be worn on regular clothing or with a kimono.

Mamechiyo’s originality ー and her quest to make kimono for now ー shine through. Her future is bright, and so is that of her contemporary kimono.