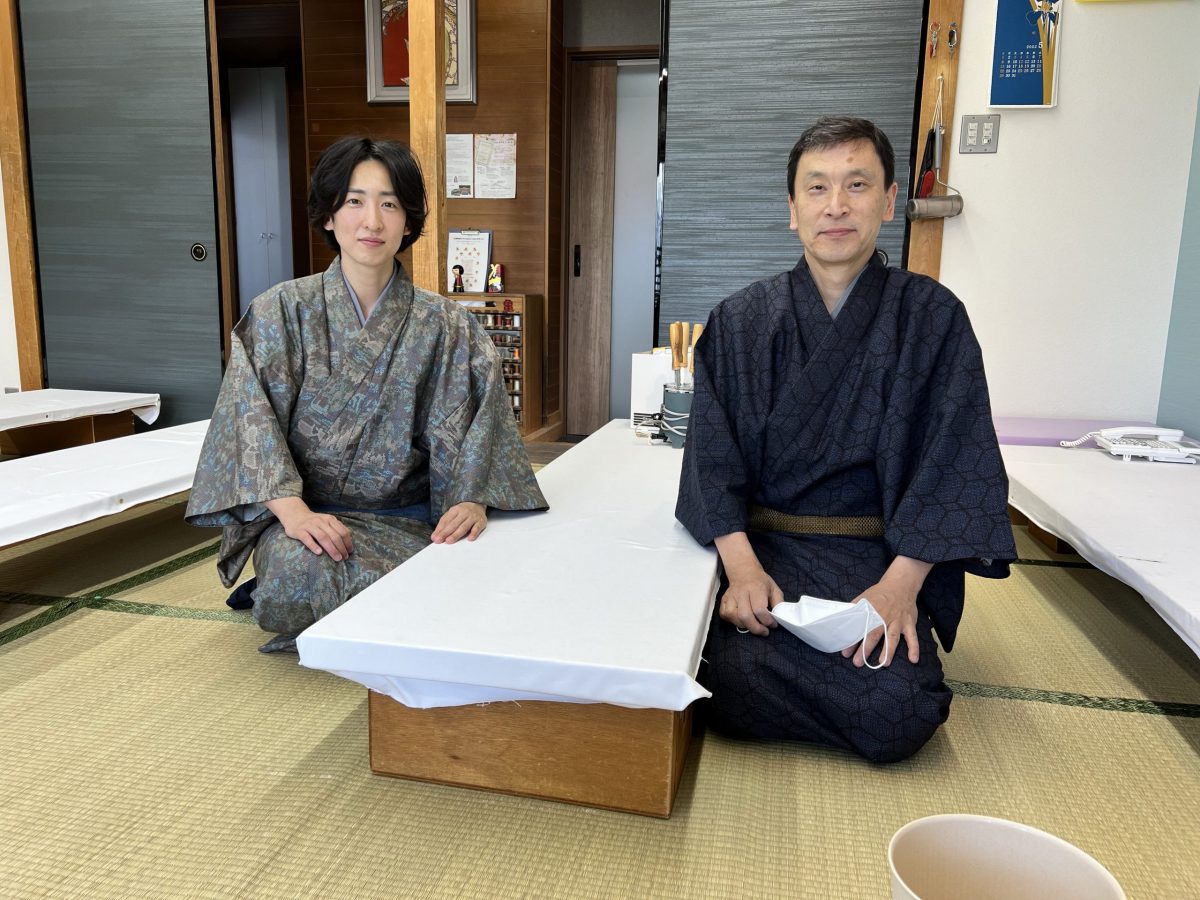 Iwamoto Wasai Kyoshitsu is a Japanese clothing manufacturer with a sewing school on a backstreet in Shinjuku 2 chome. It is exactly 100 years old in 2022.

The head of the school is Kouji Iwamoto, and he teaches the secrets of making kimono, along with his sister-in-law, Yoshii Iwamoto and one of his sons, Takumi Iwamoto. The school was started by Kouji’s grandfather, so he is the third generation to teach kimono sewing, and his son is the fourth generation.

There is only one master of kimono making who has ever become a living national treasure, and he is Sotojiro Komi [小見外次郎.]This great master taught the school’s founder, Kisaburo Iwamoto, how to sew. The few remaining samples of his work are in the national museum in Ueno and at Iwamoto’s school.

Originally the school was located in Yotsuya, but Kisaburo was doing a lot of work for Isetan (which was then called Hoteya), and so he relocated to the Shinjuku area for business reasons. The original building in Shinjuku was five stories high, but then they rebuilt into a ten-story building, with the family living space on the uppermost floors.

The school is now on the eighth floor, but once every floor was filled with students. Until 20 years ago the traditional model was followed, with apprentices coming from the countryside and living at the school. They would work at low tables in the large tatami room during the day, and clear the tables and lay out their futons at night.

Kouji has received several awards for his craftsmanship. He became a Meister of Tokyo in 2010, and also a Takuei Shita Gendai no Meikou, a notable contemporary craftsperson in 2015.

Today there are 75 students attending classes at the school, including 9 men. The number has increased since the COVID-19 pandemic.

I asked Kouji why he thought the number of students was increasing, and he gave me three possible reasons. The first is that while people were at home, they could use the time to clear out their houses. In doing so, many people found old kimono and decided that they wanted to use them. Kimono can be taken apart, sent to kimono cleaners and then resewn to fit another person.

A second reason is that the pandemic offered an easier opportunity to make time for activities than before the pandemic. People developed more flexible work life patterns, and sewing was something that could easily be done at home.

The third reason was Kouji’s belief that sewing clothing that lasts for years meets the needs of this generation. It’s not fast fashion, but far more lasting, and therefore ecologically friendly.

When I interviewed them, as if to punctuate the point, both Kouji and Takumi were wearing kimono sewn from the traditional garments that had belonged to Kouji’s mother.

I have many old kimono that have been taken apart for washing. Then there are several yukata bolts that I want to sew. They have provided an incentive to start wasai lessons.

The size of the classroom surprised me, as did the number of people studying there. Five classes are available a week. In my class, there were students at all 12 tables, and each one was sewing something different. They were all sitting on cushions at the tables and working while kneeling down. This is not very comfortable for me, and I have to wriggle around.

Naturally, I thought I could sew already. For example, I have made all my own curtains and cushions. And in the distant past I’ve produced shirts and jackets, and even a bridal dress. However, in this class I have to start from the beginning and relearn everything.

Learning to Sew the Japanese Way

Both the principles and the tools used for sewing are different from my previous experiences. One wonderfully practical fact is that because kimono are hand sewn, they are easy to take apart and sew back together.

Another advantage is that the sewing thread used is weaker than the fabric. So a seam might tear on a well-used kimono, but it will not tear the kimono fabric itself. This is why machine sewing is not an advantage when making kimono.

The first lesson was practicing decorative stitches on cardboard. After that I moved onto making a hada juban, a kind of kimono vest. During the making of this small cotton undergarment one practices all the stitches that will be used when making a kimono.

The simplest one is called unshin, and it is literally a running stitch. It sounds simple but the sewing technique is quite different from regular sewing. Instead of holding the left hand still and moving the right hand with the needle in it (if you are right handed), the needle is held almost still and the left hand moves up and down in an almost semi-circular motion, feeding the cloth onto the needle. Once the needle is full, the stitches are pulled through.

Mastering this technique is the key to sewing long seams very quickly. It is so important that one must practice at home, and each lesson starts with ten minutes of unshin training.

Unshin is easier when the cloth is under a little tension, and there are special clips that can be attached to tables or are on wooden stands that one can use to pinch the cloth and hold it taut. Some people also sit cross legged and hold the cloth between their toes. There are special irons to flatten seams gently and spatulas used for marking where to sew.

Traditionally the old Japanese numerical system of shaku, bu and sun is used, though at present I am working in centimeters.

At the front of the classroom sha awase kimono from the wardrobes of Kouji’s mother and grandmother are on display. They are kimono for June.

I am hoping that I will actually manage to complete a yukata before the end of the summer, but I am not sure if I will achieve that goal.