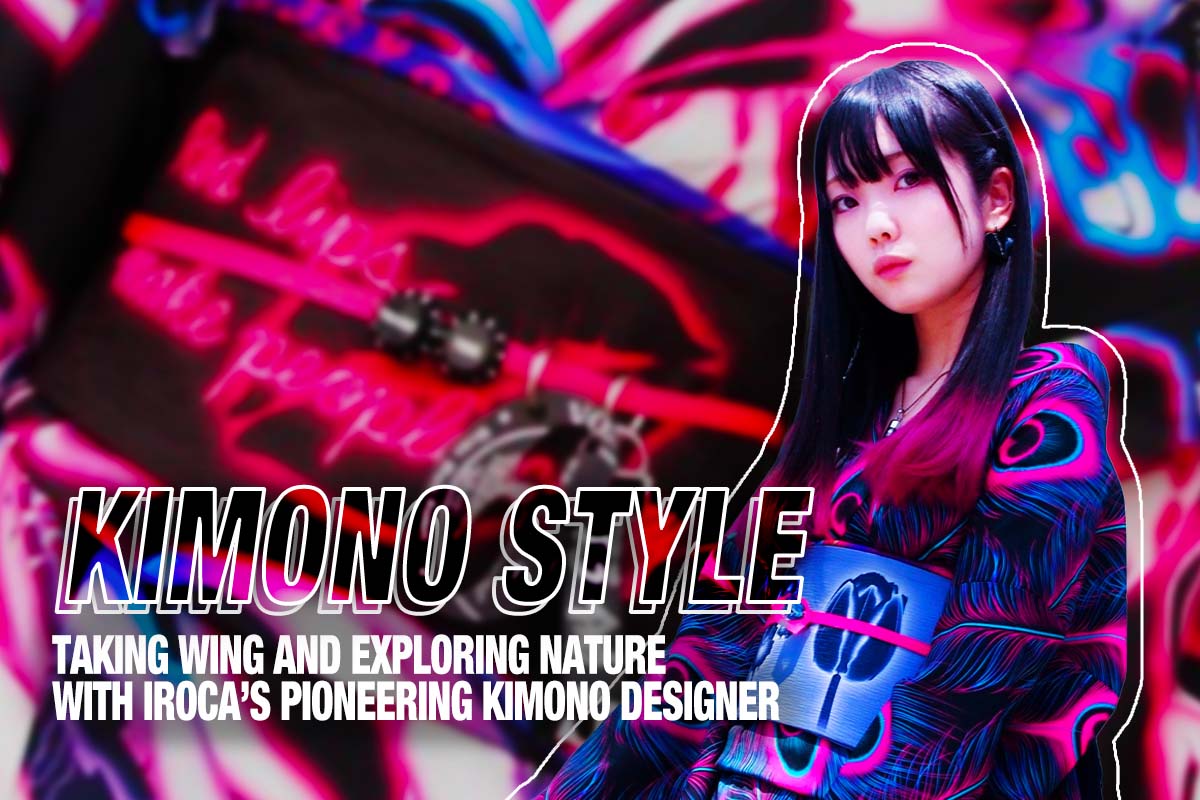 Narutoshi Ishikawa grew up with a fascination for all kinds of living creatures. He was interested in jellyfish, which look like flowers in the sea, octopuses, starfish, and butterflies.

When he started work, he gravitated to the cyberpunk movement, making things in metal. But then a friend showed him a book of old kimono, and he loved it. He realized that contemporary kimono didn’t seem as exciting as old ones, and thought he would like to make something connected with kimono.

In 2001, Ishikawa started his initiative to enliven the look of kimono by putting small creatures into resin, making original obi dome brooches to wear on obi. Young people were interested in these and they sold well.

Then, in 2006 he started to make yukata and kimono. Of course, he put his favorite creatures into the designs for his garments, and they set him on a path that continues to this day.

There is something a little dark and obsessive in his images: A fox with nine tails, floating jellyfish, peacock feathers and giant butterfly wings are all a part of his mysterious world. The subjects are completely balanced by the incredible colors that he uses in his work.

Rendered with day-glo colors, he brings power and intensity to the images. Ishikawa works with one specific dyer in Kyoto, and also a dyer in Tokyo,  who will produce the intense blues, greens, pinks and purples that he favors in his work.

Last year his work was bought and displayed by the Victoria and Albert Museum in London, in their major kimono exhibition, “Kimono: Kyoto to Catwalk”. They displayed his kimono, ‘War is Over’. It depicts an undersea world where small creatures are taking over and bringing new life in the water, in spite of the remaining carcass of a warplane at the bottom of the sea. It is an expression of Ishikawa’s desire for peace and for us to take care of our planet and the creatures in it.

He says that he looks at other things, but he always comes back to the beauty of nature, adding that living creatures are perfectly formed.

Moving Forward with the Basics

After working in the industry for twenty years, Ishikawa explains his concern that perhaps he was becoming too conceptual. The thought, he says, has brought him back to his original designs. He is once again working with giant butterfly wings, peacock feathers and bird wings. He is interested in wings.

Asked what had changed in twenty years, he tells me that he has a much better understanding of the way that the flat garment will look on the figure now. He can see it in the round when he draws it on paper, and his designs are more beautiful and satisfying than those he made before achieving this understanding.

It takes at least a month for iroca to complete each design. He then digitizes them for reproduction in different colors and sizes.

Magnet for a Young Audience

iroca’s audience is young in the kimono-wearing world. Because of this he tries to keep the prices low. He works with Ceo Alpha, a very silk-like fine polyester. His kimono are washable and easy to care for. This also means that his margins are low, and he cannot afford to employ people or expand his company.

He has also noted that some of his customers are people who inhabit a dark world. Some of them are lonely or have their own internal struggles, and he has been told that his designs give his wearers power. This makes him happy, he says, adding that he would like to continue reaching out to this audience, hoping that his work helps them in some small way.

The COVID-19 pandemic has hit the business world hard, and kimono makers must sell their kimono. iroca sells through pop-up events and an online shop. Last year was especially difficult because it was almost impossible to hold events. However, this year iroca has had pop-up shops in Osaka, Fukuoka, and twice in Tokyo.

Ishikawa’s customers are bouncing back after becoming weary of the lock-down situation, he finds. His fan base is loyal, and this year has been a good one for iroca. For seven years he has had a pop-up in La Foret in Harajuku. This is significant as the location is at the heart of the fashion world of young people, rather than in a place famous for connections with kimono.

The number of customers interested in kimono is increasing, he notes, after seven years marketing them. And he feels that the audience is changing, too.

Expressing optimism about the future of kimono, he finds that people are much freer in their expression than they were five or ten years ago. Wearing kimono is an amplifier for your personality, according to Ishikawa.

Expect to find Ishikawa continuing to use the simple designs he finds in nature, making them as beautiful, bright and powerful as he can. His new winter and furisode collection, which he is working on now, will show in La Foret in January 2022.