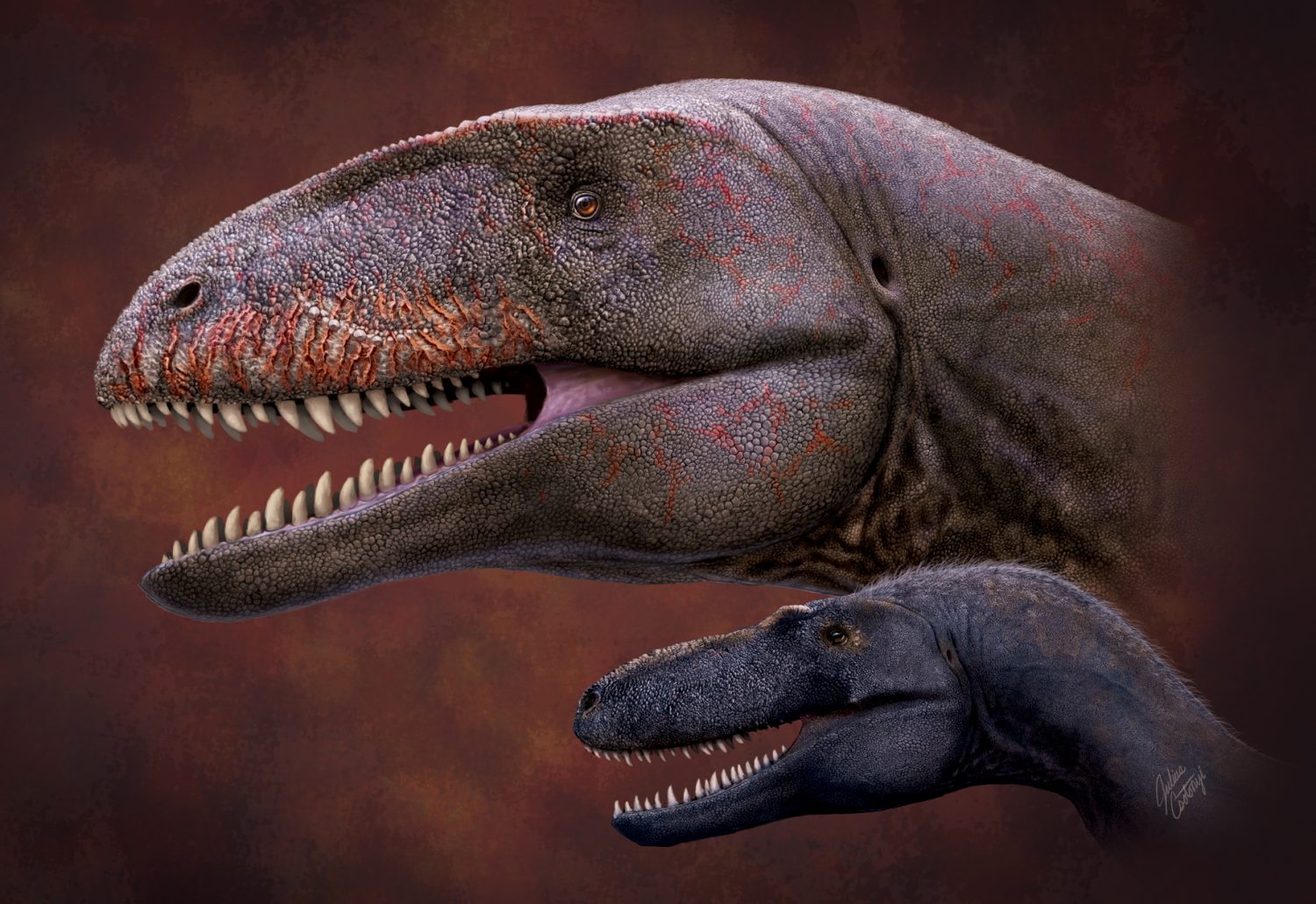 A restored image of Ulughbegsaurus Uzbekistanensis (behind). It is larger than fossils from the Tyrannosaurus family (front) which were found in the same stratum (Julius Chitney).

A team of international researchers, including experts from Tsukuba University and Hokkaido University, have published their findings about a newly discovered species of giant dinosaur in Uzbekistan that was the apex predator in an age before Tyrannosaurs ruled the Earth.

The scientists announced their results in an article published on September 8 in the British journal Open Science, published by the Royal Society.

The lead author was Kohei Tanaka, a paleontologist at Tsukuba University who made the initial discovery of the new species. Dubbed Ulughbegsaurus (pronounced oo-LOOG-bek-SAW-rus), it belongs to the Carcharodontosaurus group, meaning “shark-toothed dinosaurs.”

The newly discovered dino was named after the 15th century astronomer and mathematician Ulugh Beg, who was active during the period when the famous conqueror Timur the Great (Tamerlane) was carving out a huge empire in Iran, Afghanistan, and Central Asia, including Uzbekistan.

Ulughbegsaurus was a ferocious carnivore, roughly the size of a bus or the Tyrannosaurs of later times. Tyrannosaur species did coexist with the Carcharodontosaurus, but were only about one-fifth their size. Researchers hope that the new discovery will help fill in gaps in their understanding of how carnivorous dinosaurs evolved.

Tanaka was examining fossils kept at Uzbekistan’s state geological museum in the capital of Tashkent when he was surprised to find that an upper jaw in the collection had not previously been identified as belonging to a new species.

Further study of the jaw — measuring around 24 centimeters long by 13 centimeters in height — as well as bone fragments and teeth and comparisons with related species led researchers to estimate that Ulughbegsaurus would have reached 7.5 to 8 meters from nose to tail and weighed more than one ton.

Carcharodontosaurus were the uncontested rulers of the ecosystem from the latter part of the Jurassic period to early part of the Late Cretaceous period, or roughly 66 million to 85 million years ago. This dominant carnivore could reach 13 meters in length.

Tyrannosaurus species began to grow several times over in size from the middle of the Late Cretaceous period and vie for supremacy. Eventually, Carcharodontosaurus disappeared from the Northern Hemisphere, although it continued to thrive for some time thereafter in the Southern Hemisphere.

Scientists believe that the “changing of the guard” took place from 94 million to 84 million years ago. However, the fossil record from this 10-milllion-year “blank period” is notoriously scanty. Carcharodontosaurus apparently became extinct sometime around 90 million years ago, although scientists are unsure why.

The recently identified Ulughbegsaurus fossils came from soil strata dated to around 90 million to 92 million years ago, meaning it came towards the end of the reign of the shark-toothed Carcharodontosaurus. Since fossils of much smaller Tyrannosaurs have been recovered from the same strata, the researchers have concluded that the two types of dinosaurs coexisted for a time.

This is the third discovered example of coexistence of the two dinosaur groups, following earlier finds in the United Kingdom and the United States. But it is the first in Asia and also the most recent in terms of geological record. It is an important development in terms of filling in the blank period that remains murky as far as the fossil record is concerned.

Soil strata remaining from this blank period can also be found in Nagasaki and Kumamoto prefectures. Japanese paleontologists seem poised to increasingly focus their research on areas in Asia, including Japan.

Professor Tanaka said: “Research to fill in this blank period is important. We need to carry out investigations throughout Asia to understand how carnivorous dinosaurs attacked and defended themselves.”