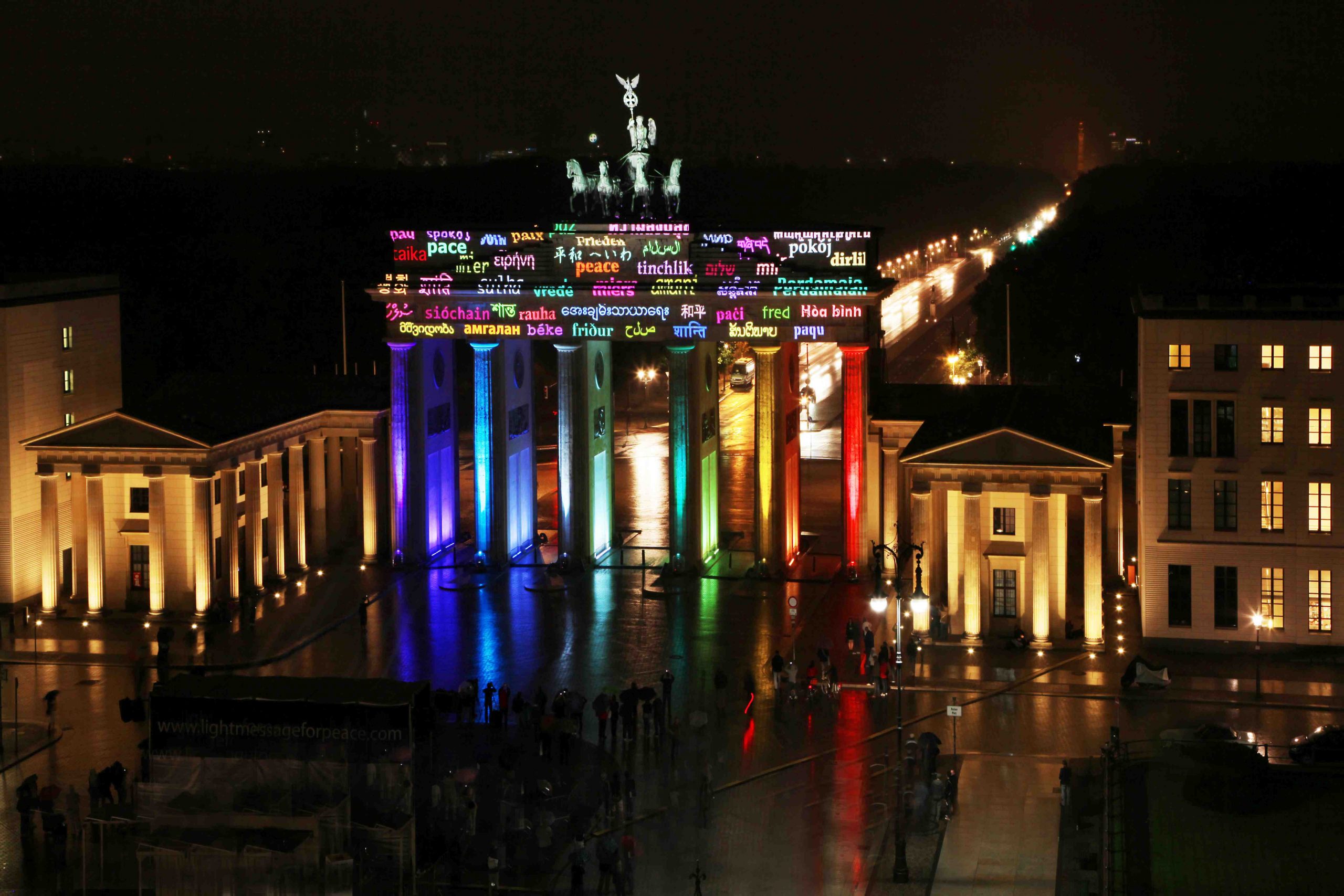 Motoko Ishii's illumination design for the Brandenburg Gate in Berlin titled 'The Message of Peace'.

Tokyo Tower stands beyond the glittering Rainbow Bridge. This typical night view of the capital would have been very different, had it not been for a person named Motoko Ishii.

“I want everyone to know about lighting design work, and I want them to realize how endlessly beautiful illumination is,” said Ishii, “I worked hard at every single job, and half a century passed in no time.”

A compilation of her work, MOTOKO∞LIGHTOPIA Motoko Ishii’s Trail of Light (Kyuryudo publishers, October 2020, in Japanese), carefully selects 150 of her projects out of more than 1,600 works and introduces them with beautiful photographs. With the year 2000 as a turning point, the show uniquely delves into what she has done before and after that marker.

The stunning book also prompted The Sankei Shimbun and JAPAN Forward to take another look at her career.

Motoko Ishii established herself as a lighting designer in 1968, after returning from Europe where she had gained experience in lighting fixture design and architectural lighting. Once back home, she opened the way as a pioneer in her field in Japan.

From 1975 to 1976, when the International Ocean Expo was held in Okinawa (roughly 1500 km west of Tokyo) to commemorate the return of the islands to Japan, Ishii was asked to design the “Night Light Sea,” an installation intended to glow in the sea for about 1 kilometer from the shore. But the future still seemed bleak, and she had no choice but to look forward.

Her prospects finally began to look better from the 1980s, after she won a project to work in Saudi Arabia on lighting for the State Guest House.

At the time, the concept of “lighting”was not commonly established in Japan. Japanese streets were dark, lit only by road lights and illumination from commercial buildings. When Ishii proposed a plan to change that to the local administration, there was no reaction.” I had no choice but to let everyone see ( my plan) and try to convince them,” she said.

For her “Light-up Caravan” design, she worked without pay on eight historical buildings in different cities in Japan, starting with Kyoto and Kobe in the west, Sapporo in the north,and Kumamoto in the south.

It took eight years for her design to take form. Finally, in 1986, “Light Up Yokohama” was completed. The project, 37km from Tokyo, pioneered the illumination of the port city, mobilizing 800,000 people in 10 days.

Afterward, she continued working on landscape lighting in various locations, including the historic Shirakawa-go Gassho Village (“White River Old-District” in Gifu Prefecture, 271km west of Tokyo) where she created a moonlight fantasy landscape.

Warming Up the Nation with Tokyo Tower

In 1989 things began to look brighter at last, after she worked on the project to illuminate the Tokyo Tower.

“I was able to prove the power of illumination to the world,” she recalled. Since then, she has been presenting world-class urban lightscapes that she is proud of to illuminate 10 bridges: Tokyo Rainbow Bridge and Sumida Bridge, both of which are in Tokyo; Yokohama Bay Bridge south of Tokyo, and the Akashi Kaikyo Bridge 445 km west of Tokyo.

In recent years, she has successfully held large-scale light events in various parts of the country, along with her daughter, Akari Ishii, who is in Paris, following her mother’s lighting design path.

“When you achieve one goal, you see a different horizon. You go on, and you will see the next horizon. I would be happy if I could go on pursuing new horizons of lights until my life comes to an end.”

In the fight against the invisible novel coronavirus, she is now thinking about light again.

“There is something about luminosity that resonates with people. The glow of the lighthouse, the eternal flame. It could be a testimony for being alive or a symbol of hope.”

During World War II, when authorities put restrictions on the use of light, she remembers seeing an electric bulb covered with a black cloth that slightly illuminated the inside of the house without leaking light outside at night. It was an experience that  gave her a feeling of warmth and appreciation, and one that influenced her later in life.

“You need warm light to be strong to fight against the coronavirus, the invisible enemy,” she warned.

“I would recommend that you turn down the illumination a little at night, surround yourself with warm lights like those of a candle, and spend a peaceful time with family and friends. The flame of the candle is gentle on the eyes and kind to the heart. You can’t survive unless you are at peace in your heart.”

Motoko Ishii was born in Tokyo in 1948. She later graduated from Tokyo University of the Arts, Faculty of Fine Arts. After working for lighting design companies in Finland and Germany, she established the Makoto Ishii design office in 1943.

Her work includes a wide range of urban and urban and events lighting. She enjoys historical novels such as those by Ryotaro Shiba and Masamitsu Miyagitani, and enjoys a glass of cold white wine while listening to music like Puccini’s opera. In 2000, the national government awarded her the Medal of Honor with a Purple Ribbon. In the first year of Reiwa (2020) she was designated as a person of cultural merit.