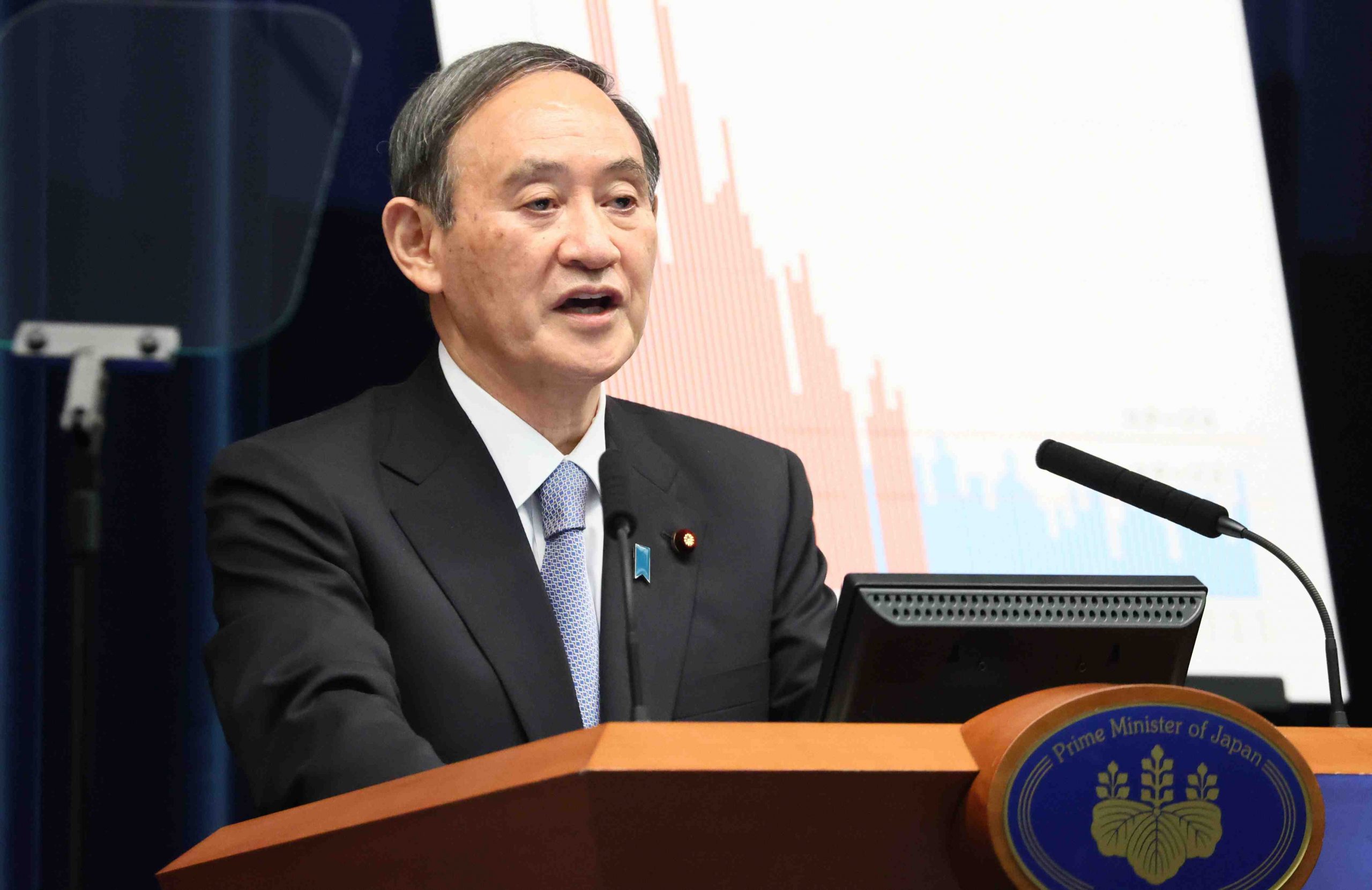 On March 18 Prime Minister Yoshihide Suga announced Japan's second state of emergency for COVID-19 will end for all remaining regions of the country on March 21.

In the 7 P.M. press conference, the prime minister outlined the specific reasons for ending the emergency designation now, while simultaneously urging continued caution and cooperation against the spread of the virus over the coming months.

Key points emphasized by the prime minister include the call for everyone in Japan to continue wearing masks and avoiding high risk situations such as outings in large groups or tight spaces.

At the same time, PM Suga delineated the future focus of the government’s plans in the effort to curb the spread of infection and mitigate economic difficulties brought by the virus. We unpack some of the main points below.

Reasons Behind Ending the State of Emergency

PM Suga explained that since January when the spread of infection was particularly fast, the situation has significantly improved.

“In the wider Tokyo area, we have gone from 4,277 new infections per day to 725, which means more than 80 percent decrease.”

“Occupied beds have gone under the prescribed 50 percent, to about 40 percent.” For Tokyo, this is half the level of January, when hospitals reached a worrisome 80% occupancy.

The prime minister recognized that “This is thanks to the utmost effort of the medical staff and all of the people of Japan, and for this, I would like to thank you.”

The March 18 announcement brings an end to Japan’s second state of emergency. While the length of both has been adjusted to regional differences, the latest one started in Tokyo and nearby prefectures on January 7, 2021, and lasted for two and a half months.

Japan has a four-tier system where several criteria delineate the level of crisis in a prefecture. The points of focus for this calculation include the rate of new daily infections and the percentage of beds occupied in hospitals. Most criteria show that the wider Tokyo area would now fall in stage three, rather than the more serious stage four.

Continued Focus on Eating Out

During the second state of emergency that started in January this year, experts including the Dr. Shigeru Omi, head of the government advisory subcommittee on COVID-19, have consistently pointed to eating out as a major cause in spreading the infection.

For that reason, restaurants were asked to close at 8 P.M. under the state of emergency, and compensated for their cooperation.

In the March 18 press conference, the prime minister extended opening hours to 9 P.M. for all eating and drinking establishments, and pledged to pay 40,000 JPY (366 USD)  per day to each business that complied.

Previously in January the government put new measures in place so that should restaurants be found out of compliance with recommended COVID-19 measures, they could be ordered to comply. If they continued to ignore the recommendations, they would incur in a fine. This was the first time a penalty had been attached to non-compliance.

In fact, on March 18 Tokyo Metropolitan government put the new rules into practice when it announced that 27 restaurants had received a warning to comply with mandated closing hours.

The enforcement measures are not limited to emergency declarations. They will continue to be available to governments even after the end of the current state of emergency.

One topic which has quickly come to the fore is the impact of the various virus mutations and their spread in Japan. On that point, the prime minister pledged to increase variant testing capacity to further grasp the behavior and impact of the virus.

“We need to reinforce our monitoring system. Thereby we want to up the number of people with positive tests who are further tested for the variants, from the current 5 to 10 percent, to 40 percent.”

In order to achieve this, the government is planning to ask for help from companies in the private sector. The WHO currently has identified three variants of the virus – U.K., South African and Brazilian – cases of each have also been confirmed in Japan.

In addition, broader general testing for the virus is set to take center stage, as Prime Minister Suga highlighted that regular testing will be undertaken in institutions where the risk is high.

“In this month (of March) we plan to further extend testing to more than 30,000 locations, in places such as care homes,” said Suga.

“As of now, we are vaccinating about 80,000 people per day, and we plan to start vaccinating the over 65 starting from April 12. We have managed to secure 100 million doses, which at the very least will cover the medical staff and elderly. To that end, I would like to communicate effectively so that as many people as possible will get vaccinated,” PM Suga announced in the press conference.

He also reassured the country that medical staff and the elderly will be covered by the vaccinations secured at this point in time. Addressing the controversy over reactions to the vaccine, he added:

“There has been news of side effects, but hearing the opinion of experts, the patients are being treated and are improving, and anyway [the side effects] do not appear to be of serious nature.”

Beyond that, however, it’s still unclear how many doses of vaccines Japan will have a couple of months from now, and currently only one vaccine - by Pfizer - has been approved for use in Japan.

Japan started vaccinating medical staff on February 15, a few days after the Pfizer vaccine was approved for domestic use. However, with the Pfizer vaccine in high demand in other parts of the world, and the AstraZeneca vaccine temporarily halted for review in several countries in the EU, the status of Japan’s vaccination program beyond the currently secured doses is also at issue.

EDITORIAL | Japan Must Speed Up Domestic Vaccines Against COVID-19

Q&A COVID-19: Let’s Talk About Japan and the Vaccine

Helping ‘The Weaker Members of Society’

Prime Minister Suga raised the following categories of struggling members of society for additional help in the form of financial aid as they struggle with the COVID-19 crisis. They include restaurants, families with children, and those with low income.

The prime minister pledged to help those who were most struggling with the COVID-19 crisis, in particular families with children.

“To those suffering with life costs and with unemployment, we would like to offer to households with children a support of ￥50,000 JPY ( $478 USD) per child.”

Helping Those with Low Income

He added, "For people with incomes below a certain level, we will expand the scope of vocational training with monthly benefits of ￥100,000 JPY ($915 USD)."

Mr. Suga also said that there will be increased incentive to train people for work in the digital field, and that emergency bank loans for businesses will continue in the new financial year, as will ward residence tax exemptions.

On top of that, the prime minister pledged ￥6 billion JPY (just under $55 million USD) support to NPOs that are active in the support of social needs, such as suicide prevention, food programs for children, and child care.

Restaurants that cooperate with the government’s recommended hours and other conditions will be paid ￥40,000 JPY ($366 USD) per day to each business that complies.

The mantra throughout the whole press conference, though, in short was that the end of the state of emergency doesn’t mean the end of COVID-19, or the restrictions needed to contain it.

Many disease experts have in fact expressed their fear of a rebound in infections, and therefore urged the government to set up concrete alarm bells to avoid repeating the strain on the medical system seen in January 2021.

Responding to this concern, government advisor Dr. Shigeru Omi said that in the coming week the experts committee will reconvene to come up with concrete flags. Their aim is to give the local and national governments time to act before a crisis, should another rise in infections occur.

In the end as at the start of his press conference, PM Suga called on citizens to maintain their faith in the continued fight against the virus and expressed his hope for the vaccine:

“With the vaccine, we have a new weapon, there is a light at the end of the tunnel. I plan to stand at the fore and protect the livelihood of the Japanese people with all my might. For this, I ask for your understanding and cooperation.”