Blog In My Part of Japan

Make A Wish - It's Tanabata! 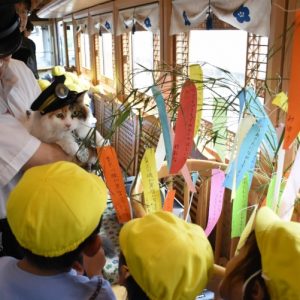 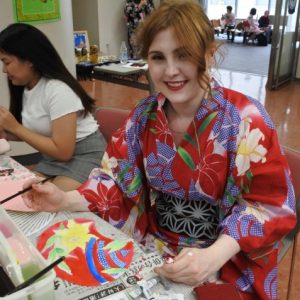 The 7th day of the 7th month. There is something quite poetic in the choice of celebration on this particular day. But in the case of Japan, this day refers only to one thing: Tanabata.

Tanabata is a celebration which occurs every year in Japan. It is associated with people of all ages making a wish, writing it on colorful strips of paper (tanzaku) and tying them to a bamboo tree. This tree may be at a shrine or simply tastefully put in your front garden. The festivity itself is on July 7, but leading up to it people will write their tanzaku and hang it on a tree, adding to the festive atmosphere.

There are various explanations for where the legend of Tanabata comes from. One story has it deriving from legends in China, while another attributes it to the tradition of a priestess who would weave a kimono in honor of the gods and hope for a good harvest.

The most famous tale is the legend of Princess Orihime (the star of weavers, Vega) and prince Hikoboshi (the star of cow herders, Alastair). The legend goes that the two fell in love, but they would neglect their work and not shine as brightly when they were together. So, the two lovers were separated and allowed to only meet once year, on the seventh day of the seventh month.

In China it was believed that these two stars shone the brightest on the day of this holiday, which is sometimes given as a reason the legend was born in the first place.

Some versions of the tale also say that if it rains, the two lovers cannot meet. However, this part of the story is less established and seems to depend on the region. In some areas, residents wish for rain yet still celebrate the holiday.

An important way in which Tanabata is celebrated is to attend local matsuris, Japanese folk festivals.

The biggest Tanabata celebration in Kanto area, which includes Tokyo, is in Hiratsuka. This city, half an hour from Yokohama and one hour from central Tokyo, suffered from heavy bombing during the war, but still managed to maintain its primary role in Tanabata celebrations in the postwar period. People from all over Japan come and admire the ornamental decorations on the main streets of the city, sample delicious food and enjoy the day.

And why are we writing about this, you might ask?

Because this is the festival I decided to investigate on a hot, sweaty Sunday afternoon. And, I have to say, it was a sight to behold. It was suddenly clear this festival was called “the biggest Tanabata festival in Kanto” for very good reasons.

Upon entering the main street, there was food, goldfish-catching stalls, and decorative mask vendors stretching as far as the eye could see. The main street was decorated with arches of lanterns sporting long ribbons, which would flutter in the warm summer breeze, giving an admittedly stifling hot afternoon a slightly cooler feel. The lanterns themselves were an explosion of color with the most imaginative designs, ranging from Little Red Riding Hood to stylized Mount Fuji.

We ate to our hearts’ content and drank cold beer to combat the summer heat. The food stalls included many of the usual suspects, such as yakisoba, okonomiyaki, takoyaki, and yakitori. I highly recommend the stall with frozen strawberries and all-you-can-eat condensed milk (which was decadent but refreshing). What is not to love?

But perhaps my favorite part of the day was when we broke away from the crowds and hid in a shade of the mercifully quiet and peaceful Hiratsuka Hachimangu Shrine. After passing a pond full of carp and quacking ducks on each side of the path, we looked ahead and saw bamboo branches decorated with tanzaku, framing a handsome shrine. The whole place reverberated with summer colors, from the multitude of pastel omikuji paper wishes tied to the trees to the glorious yukatas of couples passing by.

There is something inherently human about wanting to wish for something which will make your life better. It’s perhaps even more human to find comfort in learning you are not the only one. This may be the reason I found this such a touching moment—it made me reflect on the seasonality and beauty of having rituals which are repeated every year, and the comfort to know that it’s the time of year in which in the explosion of color brings you a chance to wish for something new.

So, if you are ever near Hiratsuka during this time of year, make sure you hit up the festival and Hachimangu Shrine with its magical atmosphere. If you don’t make it, though, it means more space for the rest of us to enjoy a little moment of paradise in this truly wonderful festival.