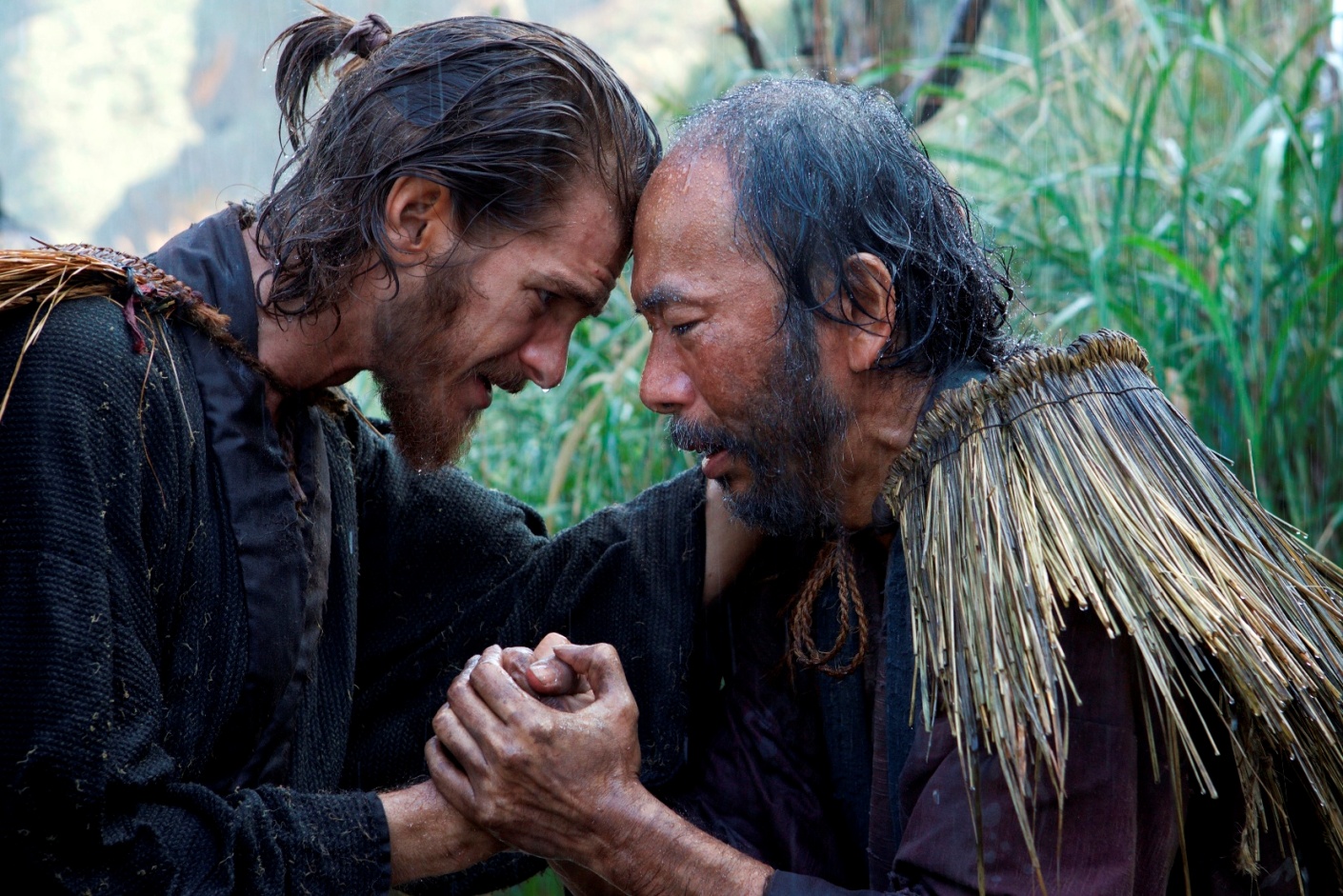 “I’d really like to do Silence right now… it’s been on my mind since 1990… it’s going to be tricky to deal with the persecution, to show it was for self-protection, and how it leads to foreign ideas being transformed in Japan.” (From a 2002 interview with Martin Scorsese, quoted in Scorsese on Scorsese)

At first sight, Scorsese and Shusaku Endo, the author of Silence, would seem to have little in common. Endo, who died in 1996, lived the uneventful life of a respected Japanese literary figure. As a young boy he converted to Catholicism at the prompting of his mother. Unlike Kenzaburo Oe, Endo never won a Nobel Prize. Unlike Yukio Mishima, he didn’t live and die in a blaze of publicity. Unlike Haruki Murakami, he never enjoyed huge overseas sales; indeed, most of his considerable output hasn’t been translated into English.

In contrast, Scorsese is an Oscar-winning film director with a stack of critical and box-office successes to his name, including such hard-boiled classics as Taxi Driver, Goodfellas and Raging Bull. His favoured milieu is the “mean streets” of inner city America, where he grew up, with its violence, profanity and crime. A self-described lapsed Catholic, he has been married five times and has admitted to periods of heavy drug use.

It appears to have been through the medium of film that Scorsese first encountered Japan. He named Ugetsu, Kenji Mizoguchi’s 1953 masterpiece, as one of his twelve favourite movies and considers Akira Kurosawa to be his “master.

In 1990, Scorsese appeared as an actor in Dreams, one of Kurosawa’s last films. It was apparently during the shoot in Japan that he read Endo’s Silence.  The book had been sent to him by Paul Moore, the broad-minded Episcopalian Bishop of New York, after a single meeting between the two men in which they discussed religion for several hours. Scorsese was so transfixed by the novel that he re-read it “countless times” and spent decades trying to get the film made.

Scorsese and Endo both examine the dark side of human nature and tackle controversial religious themes. Scorsese directed The Last Temptation of Christ, which provoked demonstrations and a cinema bombing, and Kundun, a film about the Dalai Lama. As a young literary scholar, Endo specialized in the writings of de Sade and even visited the crumbling remains of the Marquis’s chateau. His 1986 novel Scandal describes the sadomasochistic fantasies of a well-known Catholic author.

In their work the two men are not so far apart after all.

Silence was first published fifty years ago. You can see what attracted Scorsese to it. In his introduction to a new edition, he describes the Jesuit missionaries who are the protagonists as “the best and the brightest” of their world, echoing the ironic title of David Halberstam’s account of the American disaster in Vietnam. The plot is a quest for a missing hero that parallels Joseph Conrad’s Heart of Darkness and its 1970s iteration in Apocalypse Now. A much-admired senior Jesuit has disappeared into hostile territory and, Kurtz-like, is rumoured to have betrayed his mission and gone native. A younger priest, Rodriguez, sets out on his trail.

The novel is suspenseful; you’re never sure how it will end. Even afterwards, you’re never quite sure how it has ended.  The setting is seventeenth century Japan, but Endo deals with issues that still define the world today—the clash of civilizations, cultural imperialism, relativism versus universal values, heroism versus survival, guilt and redemption and more guilt. As a great artist, Endo gives no simple answers but creates a totally convincing human reality to portray the moral miasma.

Silence is not an easy work to adapt to film. We know that because a talented Japanese director, Masahiro Shinoda, failed to do the book justice in his 1971 version. He wasn’t helped by some awful casting. Notably, the key role of Ferreira, the missing Portuguese priest, is played by a heavily made-up Japanese actor – Tetsuro Tanba, best known to foreign audiences as Tiger Tanaka in the 007 movie, You Only Live Twice. Worse, Shinoda butchered the novel’s pivotal scene and left out the all-important coda. Endo has a joint credit for the screenplay but, according to Endo expert Professor Mark Williams of Leeds University, the author privately expressed his disappointment with the film on several occasions.

Martin Scorsese’s film is much more faithful to the original text than Shinoda’s effort.  The acting is far better, with stand-out performances from Liam Neeson in the role of Ferreira and Issei Ogata as the cunning, smooth-talking Inquisitor. Scorsese retains the closing section and uses voice-over to depict Rodriguez’s harrowing psychological journey, which is related by interior monologue in the book. The climactic showdown crackles with tension. In keeping with Endo’s theme, the soundtrack makes ample use of silence and follows the book in highlighting the trilling of cicadas. There is even a visual twist in the tail that adds to the ambiguity.

FROM MUDSWAMP TO DEEP RIVER

In 1950 the young Shusaku Endo set sail for France. Five years after the end of the war, Japan was still persona non grata in the international community. The American occupation was in full swing and Japan had yet to reopen its Paris embassy. Endo was one of the first Japanese of the post-war era to study overseas.

The experience was transformative. As he writes in the introduction to Foreign Studies, he became aware of an “unfathomable distance” between Japanese and Western culture. He continues as follows:

The same sense of distance is evidenced in my novel Silence… one of the characters tells the missionary Rodriguez “Japan is a mudswamp.” This is a reflection of my own doubts formed during my stay in France as to whether Western culture… can ever take root in Japan.

The debate between Rodriguez and his adversaries is nominally about religion, but in a deeper sense about the relationship between culture and values. The Inquisitor accepts that Christianity may be a fine thing in Europe, but considers it damaging in Japan. The missionary responds that what is true in Europe is true everywhere and, furthermore, until the savage repression of the early 1600s Christianity had spread like wildfire.

Or had it? Ferreira tells him “even in the glorious missionary period you mention, the Japanese did not believe in the Christian God, but in their own distortion.”  Later the Inquisitor explains that he won’t bother to persecute the few remaining communities of Japanese Christians. Without the influence of priests, the object of their veneration “has gradually changed so as to be no longer like the Christian God at all.”  In the cultural mudswamp of Japan everything gets distorted and transformed.

When Japan reopened to the West in the mid-nineteenth century and the ban on Christianity was lifted, tens of thousands of kakure Christians (hidden Christians) came out into the open. Their mode of worship— indeed, the language of their rituals—had changed out of all recognition over two centuries. Most still identified as Catholics and returned to conventional Christianity, but some did not and chose to continue with their idiosyncratic kakure traditions. A handful of kakure carry on today in islands off Kyushu, though most have shifted back to conventional Japanese religious practices.

Christianity was not as successful in Japan the second time round. Despite the unrestricted influx of missionaries, believers have never numbered more than 1 percent of the population. Objectively it appears that the Inquisitor in Silence was right when he claimed “this country of Japan is not suited to the teaching of Christianity. Christianity simply cannot put down roots here.”

Even so Japan has had five Christian prime ministers and there has been disproportionate influence on the intelligentsia. Major writers like Ryunosuke Akutagawa, author of Rashomon amongst other stories, and Osamu Dazai, best known for No Longer Human, were keenly interested in Christianity.

And then of course there is Endo, a Catholic convert painfully aware of the barriers between cultures. In his story Araki Thomas, which is a dry run for Silence, the apostate Japanese priest realises that poor Japanese peasants pay the price in blood for the Church’s ambitions. “That’s enough!” he cries out. ”Leave me alone! Don’t try to force your ideas on the Japanese!”

Yet Endo came to revise his opinion about cultural determinism, partly because of his interest in Austrian psychologist Carl Jung and other investigators into the submerged areas of the human psyche.  “I am now convinced that meaningful communication between East and West is possible,” he wrote in the introduction to Foreign Studies. “Despite the mutual distance and the cultural and linguistic differences that exist in the conscious sphere, the two hold much in common in the unconscious sphere.”

In Deep River, his last novel, Endo offers up an open-ended, pantheistic vision. “I don’t think God is someone to be looked up to as being separate from man,” the key character says. “I think he is within man and that he is a great life-force that envelops man, envelops the trees, envelops the flowers and grasses.” The river of the title is the Ganges. For the troubled characters of the story, it becomes an endlessly flowing river of life and death that washes away everything, mudswamps and cultures included.

Through the creation of a timeless work like Silence, Endo had already proven there are human commonalities that transcend culture.  Unusually for a Japanese novel, it is written from the viewpoint of a foreigner and the crucial scene is a confrontation between two foreigners, Rodriguez and Ferreira, which is totally convincing.  At the level of art Endo understands seventeenth century Portuguese missionaries better than a modern Portuguese citizen would.

Likewise, the New Yorker Scorsese understands Endo’s novel a lot better than Japanese film director Shinoda did. “Silence has taken me on a deeper road than my previous films,” he told the Daily Telegraph in November 2016, “I didn’t know how deep it was and maybe I still don’t.”

Peter Tasker is a Tokyo-based analyst with Arcus Research