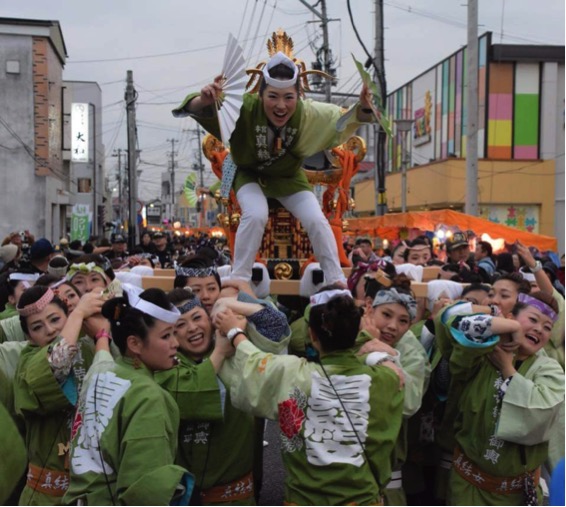 What is a mikoshi and what is Mayumi Mikoshi?

A mikoshi (or omikoshi) is a “portable shrine parade” where a small palanquin shrine is carried around town on the shoulders of festival goers before being returned to the local shrine it belongs to.

There are many mikoshi festivals throughout Japan, and watching them is a great way to experience Japanese culture.

Mikoshi is a Shinto festival which is celebrated all over Japan, usually in autumn. The parade is usually accompanied by chants and traditional music. The people carrying the heavy omikoshi have to move in sync to advance forward successfully — it’s harder than it looks!

Each region has its own style. In Osaka, for example, men take part in a similar festival which involves a dance-off-style performance called Danjiri, where competing teams rock the omikoshi as precariously as possible to vie for the audience’s attention.

The mikoshi shrine is usually carried by men but Mayumi Mikoshi, named after the mascot of Motomiya where the festival takes place, is a special one. It’s for women!

October marks the autumn festival in Motomiya, Fukushima prefecture, which is home to several shrines and temples. Taking place over three days, celebrations kick off with a Chibikko Mikoshi (children’s mikoshi), followed by Mayumi Mikoshi for women, and ending with Hadaka Mikoshi (naked mikoshi) for men. There is plenty of sake to go around along the way, and it is an event not to be missed!

Watching the parades is a good way to understand Japanese culture, but taking part is an even better way to experience it. Not many foreigners can say they have tried such a unique experience.

I did last autumn, and I couldn’t recommend it highly enough!

Here we are in action at last year’s festival: 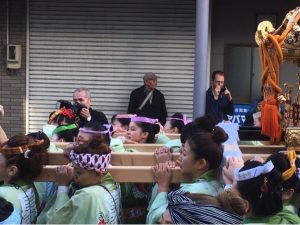 To find out more, check out the Mayumi Mikoshi stall at the Fukushima Festa in Ebisu Garden Place this weekend.

In addition to mikoshi, there will be stalls from over 20 towns, cities, and associations in Fukushima prefecture where you can try local produce and find out about other festivals and tourism spots in Fukushima.

Where: Ebisu Garden Place, near Ebisu Station in Tokyo.

For more information, check out the poster below: 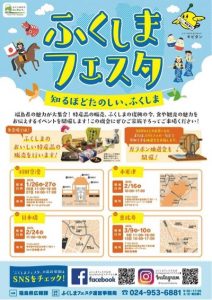