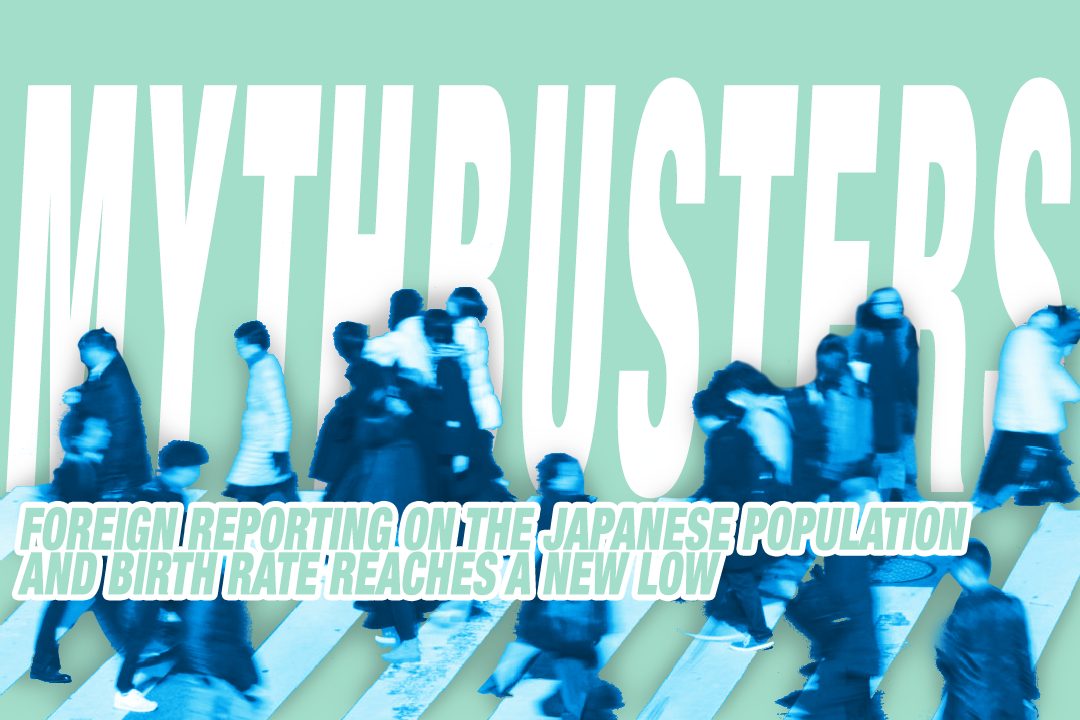 The last weeks of 2018 saw a spate of articles in the English language press reporting that the Japanese “birth rate” was at the lowest point ever recorded. Each and every article making this claim was fake “news.”

These articles are evidence that not only is there political bias, but reporters also cannot get basic facts right and editors publish articles with glaring factual errors.

Here are two of the many year-end articles with glaring factual errors. I chose them because they appeared in very prominent mainstream news sources, not obscure blogs or fringe sites.

National Public Radio (NPR) (U.S.) carried an item under the headline “Japan’s Population Is In Rapid Decline” in which it was claimed “Japan's birthrate has dropped to a historic level, the lowest since data gathering began in 1899.” Further, the article asserted, “Birth and death statistics show that the pace of Japan's population collapse is speeding up.”

The Guardian (U.K.) ran a very similar article under the headline “Japan shrinking as birthrate falls to lowest level in history.”

Although both articles use the term “birth rate,” it is clear from their content and from the Japan Times article cited by NPR that all three articles are conflating the fertility rate with the “birth rate.” 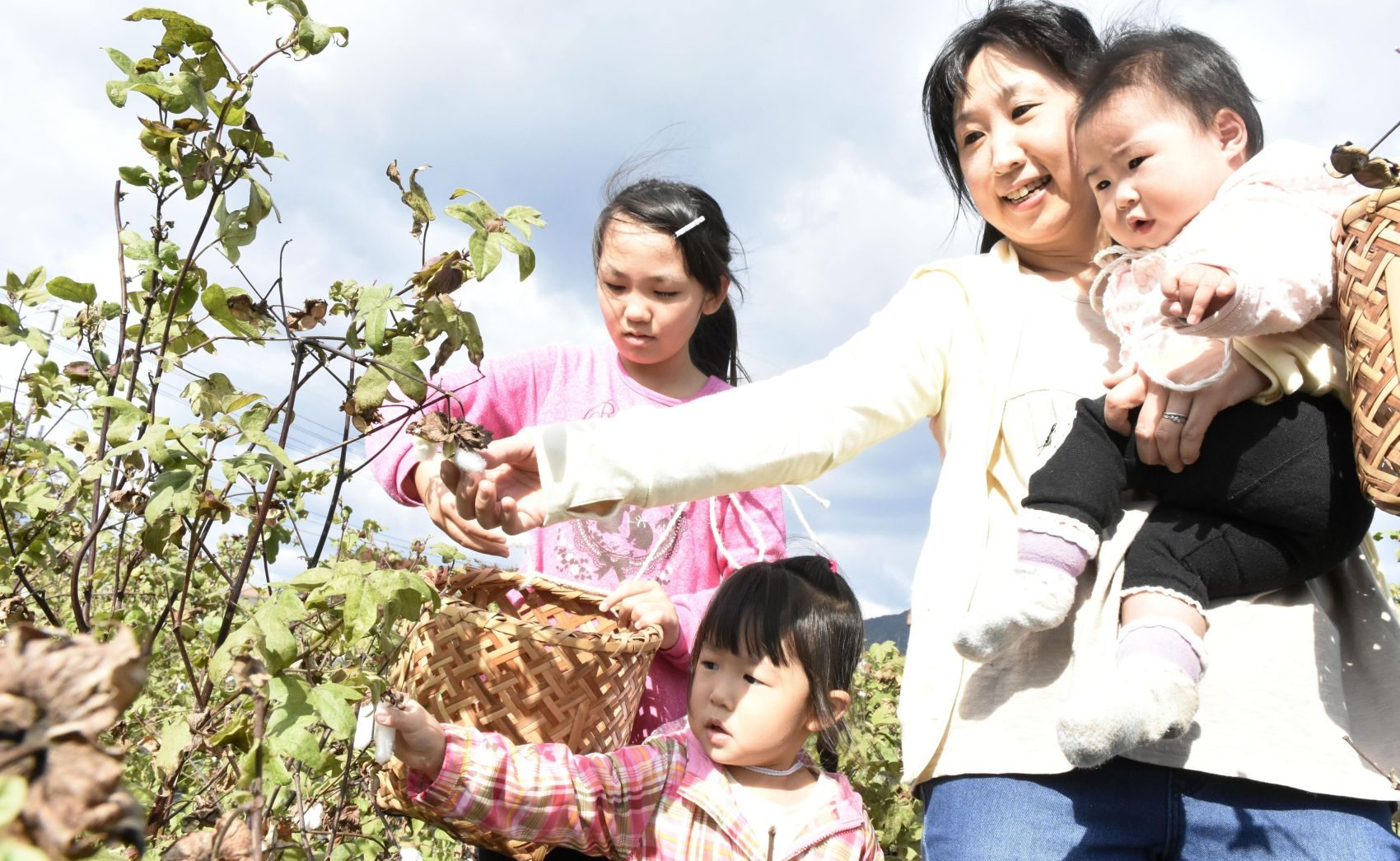 The two are quite different from each other.

Moreover, notwithstanding numerous fallacious reports to the contrary, the propensity of Japanese women to give birth if they can do so has risen markedly since 2005. Japan’s fertility rate is considerably higher than a number of European countries. It also measures notably higher than that of South Korea, Taiwan, and Singapore.

Failure to Understand the Numbers

The linkage of the lowest number of births on record to the fertility rate shows a fundamental lack of numerical literacy on the part of journalists and their editors.

There are two variables that determine how many babies are born in a given year: the fertility rate and the number of fertile women.

On the other hand, the fertility rate can fall quite substantially even as the number of births and the total population increases, if there is an increase in the number of women of childbearing age.

In particular, there was a notable baby boom between 1971 and 1974, despite a declining fertility rate, because there was an increase in the number of women of childbearing age who were born in the immediate postwar baby boom.

While the fertility rate declined from 4.32 in 1949 to a low of 1.26 in 2005, the total population was increasing until 2011 — despite the absence of large-scale incoming migration. 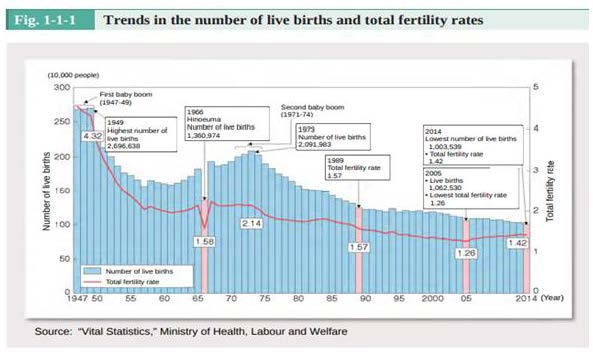 What is Japan’s Fertility Rate?

A common measure and the one almost invariably called “the birth rate” in English language is the “total fertility rate.”

More important in the context of the reports on demographic change is the well-documented fact that the lowest fertility rate on record for Japan came in 2005, when it dropped to 1.26. 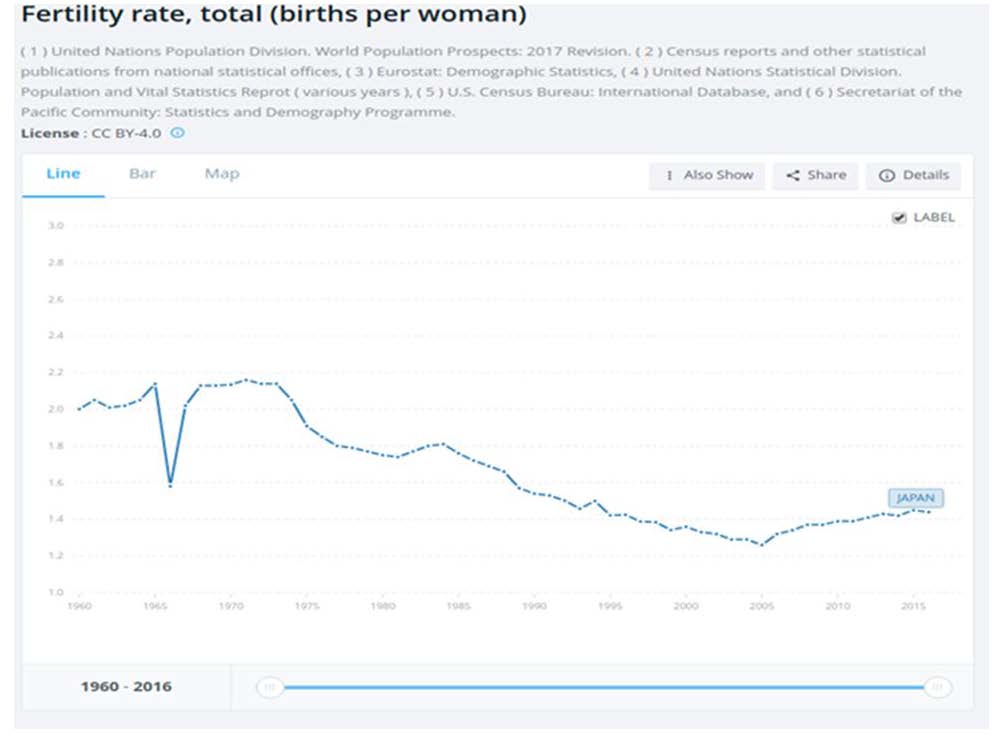 The data clearly shows the fertility rate — what NPR and The Guardian are calling the “birth rate” — was in fact lower in 2005 than it is now.

Then What is the Birth Rate?

Japan’s birth rate in 2014 (the last full year of data available for this measure) was 8 per 1,000 people. This rate is “crude” because males as well as girls and women who are outside the age range in which they can give birth are counted for this calculation.

Any country such as Japan with a large proportion of post-menopausal women will inherently have a lower birth rate than one where women die relatively young. Countries such as India and China that have an unnaturally large proportion of males in the population will also have a distorted crude birth rate.

Although not appearing in the NPR and The Guardian articles, a standard journalistic cliché in this context is to assert that “Japan has one of the lowest fertility rates in the world.” This is only true if the bar is set to include all the countries with low fertility rates. Japan is not, however, among the 10 lowest, half of which are other Asian countries not mentioned by the same publications.

The data also shows that the German rate was lower than that of Japan for decades and that there is little difference between the current Japanese fertility rate and that for German nationals (1.43) — something seldom mentioned in articles about Japan. (The recent overall upturn in German rates is largely due to migrants.)

Japan is Normal — But That’s Not Interesting to Editors

If Japan in fact is not a country with a notably low fertility rate by European standards, why do journalists not write something along the lines, “The Japanese fertility rate is below the EU average of 1.59 but well above that of all southern European countries”?

The answer, I think, is that freelance journalists cannot sell, and editors do not want stories that say, “Japan is a more or less a normal country in European terms.” Claims that Japan is exceptional or deviates from “Western norms” can be used to generate clicks, and if sex or the alleged lack thereof can be made part of the story, so much the better.

Japan’s Population Decline Not as Rapid as Media Portrays

Both the NPR article and The Guardian article portrayed the Japanese population shrinkage as singularly rapid. Many other articles have made the same claim. Still others have said the Japanese shrinkage is without precedent.

Despite what journalists claim, the Japanese population decline is not particularly rapid — nor is it without precedent.

The population decline in 2018 was 0.4%. Anyone on a diet who lost only 0.4% of their weight in one year would not claim a rapid weight loss.

A population loss comparable to that projected for Japan by 2050 (24%) has already been experienced by Bulgaria, which went from 9 million in 1986 to 7 million in 2018. The current population of Bulgaria is only 78% of what it was at its peak. Moreover, there are a number of other eastern European countries that are projected to experience rapid population shrinkage.

The factors behind the Irish population decline are not the same as those in Japan. Famine and emigration were significant factors in the Irish decline. I am personally linked to County Cork, Ireland, by a paternal ancestor who was one of the many who bailed out, initially to Canada, later to the United States.

Outbound migration is not currently a significant factor in Japanese demographic change and is unlikely to become so in the future.

Ironically, shortly after the inaccurate and sensationalist articles about Japan appeared, Norwegian Prime Minister Erna Solberg declared, “Norway needs more children!” Numerous news sources quoted an Agence France-Presse report that stated, “In Norway, Finland and Iceland, birth rates dropped to historic lows in 2017, with 1.49 to 1.71 children born per woman.” This reporting serves to highlight how dismal the reporting on Japan is. Even the British tabloid the Daily Mail got the numbers right and did not confuse total births with the birth (fertility) rate.

A Nordic fertility rate of 1.49 is only marginally better than that of Japan and has immense significance in terms of fertility policy in Japan.

What foreign and domestic pundits say Japan should do to raise fertility (shorter working hours, extended childcare leave, generous daycare provision, etc.) has already been largely achieved in the Nordic countries. Yet their fertility rates are sinking, propped up in the case of Sweden only by high fertility immigrants.

While the Nordic welfare and equality provisions are certainly valuable, their fertility rate pattern shows that these policies are not guaranteed to raise or sustain the fertility rate.

Why Do Journalists Make Demonstrably False Claims about Japan?

Occam’s razor postulates that simple explanations are more likely to be correct than more complex ones.

More recently something known commonly as Hanlon’s razor is sometimes cited. In its bluntest formulation as given by the Wikipedia article on the subject, Hanlon’s razor is, “Never attribute to malice that which is adequately explained by stupidity.”

Malice, or at least an agenda, cannot be ruled out in foreign writing about Japan. In nearly two decades of teaching “Japan in the Foreign Imagination,” I came to feel strongly that much foreign writing about Japan is not intended to inform. Rather, it is intended to make foreign readers feel fortunate to be neither Japanese nor living in Japan — in short, to confirm their sense of national, cultural, ethnic, or even racial superiority.

Stupidity is perhaps far too harsh a word, but failure to get simple, well-documented and easily-verifiable numerical data correct — such as the lowest fertility rate on record for Japan — is certainly the reflection of a very low standard of professionalism as a journalist.

It would be one thing if the bogus claims about Japan appeared only in blogs or sensationalist venues. But all the fails documented here can be found in mainstream, upmarket media aimed at what in Britain is called “the chattering classes.”

That says to this Japanese citizen that the editors and writers for such media hold facts in contempt. They may well hold the same attitude with respect to Japan and the Japanese.