[Mythbusters] Paper Jam: Foreign Reporting is Short on Facts About Fax in Japan 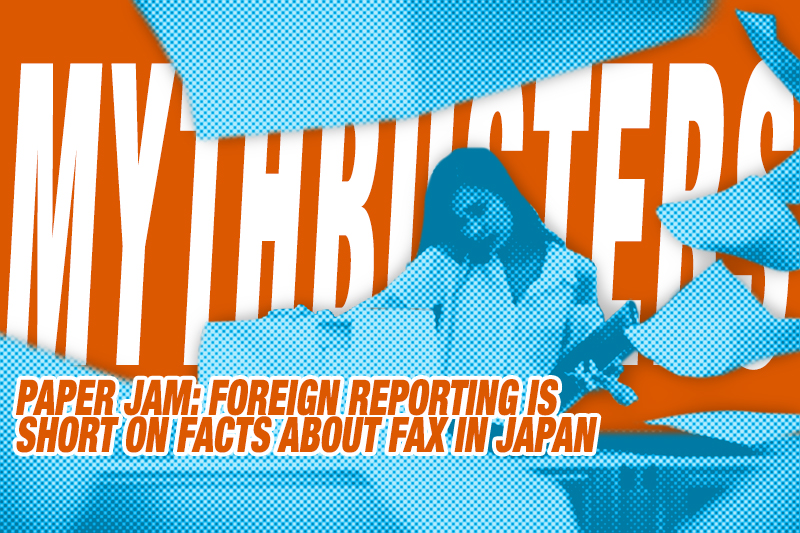 In the two decades I taught my course “Japan in the Foreign Imagination” at Keio and other Japanese universities, I came to stress that most general media writing in English about Japan and the Japanese appeared intended to make non-Japanese feel superior to the Japanese and fortunate not to be resident in Japan. This is particularly true of media that caters to the largely white American PMC (professional managerial classes).

Nowhere has this pattern been more evident than in two recent articles appearing in the Washington Post and the New York Times.

On April 14, the New York Times published “Japan Needs to Telework. Its Paper-Pushing Offices Make That Hard” under the byline of its business correspondent Ben Dooley.

As with almost all writing on this subject, the article was larded with cultural clichés, including samurai, but mercifully no ninja:

While the world may see Japan as a futuristic land of humanoid robots and intelligent toilets, inside its offices, managers maintain a fierce devotion to paper files, fax machines, business card exchanges and face-to-face meetings.

If the world sees Japan as a “futuristic land,” that is because foreign media, including the New York Times, has propagated that image.

In the two weeks prior to the publication of his article, the NYT had not one but two articles celebrating Japanese toilets. The NYT Tokyo bureau chief has peddled the robots and faxes story, and, shortly after Dooley’s piece appeared, the paper carried a typically exaggerated AP story entitled, “Japan Debuts Robots at Hotels for Virus Patients.”

If English-language media was not constantly exaggerating the degree to which humanoid robots are used in Japan (for all practical purposes, not at all), there would be no cognitive dissonance of the type Dooley claims.

In other countries…many white-collar workers have made a fairly routine shift to Zoom video conferences….

The shift to Zoom was marked by repeated security failures, for which the company founder and president made an abject apology. Some agencies in New York City, home base for the NYT, prohibited its use.

Further, as is typical of writing on this subject, he offers no hard (or soft) data on what “other countries” are doing.

Dooley does not say if he made an effort to find out. I did ー hours of searching for Japan, the United States, Britain, Germany, France, and Italy. Even impressionistic statements are rare. Solid survey data for the state of home working since the advent of the pandemic is essentially non-existent.

This type of writing is endemic when it comes to Japan. No data for other countries, so it is impossible to say whether the situation in Japan is good, bad, or indifferent.

Comments to the Dooley article were terminated after only 49 were posted. No reason was given for the early termination, but postings by medical practitioners were undermining his claims about fax usage, and by so doing making it painfully clear that this article was based on stereotypes, not substantive research.

Perhaps the most telling rebuttal came from Michael Plunkett, a Chicago MD, who wrote:

Try American medicine. Nothing can happen without the fax machine. Need a referral? You need a fax. Want a prescription refill? Walgreens prefers faxes to electronic prescribing. Want to make an appointment? The physician you are trying to see demands a fax of your labs before she will make you an appointment.

To be sure, there were those who endorsed Dooley’s clichés and stereotypes, but the counter-claims came with a telling air of authority. No one argued against the statements by Plunkett or others who cited cumbersome and archaic procedures in the U.S.

Simon Denyer Just Doesn’t Get It: Racism is Not Okay

For all its clichés, stereotypes, and unsupported assertions, Dooley’s article is relatively benign compared to a Washington Post article entitled, “Work from home, they said. In Japan, it’s not so easy.”

It begins with the assertion, “When it comes to working from home, Japan simply doesn’t get it.”

Denyer does not say “the government of Japan” nor does he say “Japanese corporations.” He is in effect saying that the Japanese people “don’t get working from home.”

To convert this into an idiom from his native Britain, the Japanese are thick as two short planks.

According to his article, not only are we thick, but we are culturally backward. “The uniquely rigid work culture has left this country among the least prepared in the developed world to embrace the new remote-working realities of the coronavirus age.”

Not content with insulting the Japanese people as a whole, Denyer continues:

Like the hare in the fable, it often feels like a country that raced headlong into the future, and then in 1991, took a nap and let everyone else overtake it. Japanese companies lag their Western counterparts in IT investment, and many are still stuck 20 years in the past, with old software and little awareness of cloud computing or video conferencing tools.

There is nothing specifically Japanese about this. In the U.S., there is a strong demand for programmers versed in the COBOL programming language that went into general usage in the 1950s. They are needed to maintain crucial “legacy” software in business and government, and to update software to deal with U.S. government mandated relief payouts.

There is data on IT investment for a number of countries. Whether Denyer did not bother to look for it, or whether he looked but did not cite it because it did not support his derogatory claims about Japan, is a question only he can answer. He goes on to say:

IT departments are so paranoid about protecting intellectual property and confidential client information that they allow employees to access work systems only on office computers.

Such rules are not Japan-specific and are in fact considered basic security practice.

Finally, he trots out the two most common clichés used by foreign pundits writing about home work in Japan:

This is a country where businesses still send faxes, and where documents have to be stamped with a seal, or hanko, dipped in ink.

Simon Denyer is an experienced journalist with a very high opinion of himself. He has been stationed in Japan since mid-year 2018. If he thinks hanko are “dipped in ink,” it is painfully evident that his powers of observation are essentially nil, and everything else he says that is not based on hard data is not to be taken seriously.

He also does not seem to be a reader of the paper that employs him. Less than a year before his article denigrating the Japanese appeared, the Washington Post carried an article reporting that fax usage was not only common in the United States but that it appeared to be increasing.

Moreover, while I was writing this commentary, an Associated Press story appeared under the headline, “Faxes and email: Old technology slows COVID-19 response.”

The country in question? The United States. It cites a top Centers for Disease Control and Prevention official as saying, “We are woefully behind” and “puttering along the data superhighway in our Model T Ford.”

In contrast, just weeks after these two articles appeared, Japanese reports were noting a rapid and widespread take-up of home working such that the demand for office space in Tokyo was in decline. Other stories have reported the continuation of home or flexible working by major corporations.

Contrary to what Simon Denyer may think, we Japanese are quite capable of “getting things” and getting them quite rapidly.

I retired in 2017 and am no longer teaching my “Japan in the Foreign Imagination” course, although I have offered bits of it in an adult education program at Reitaku University. Were I still doing it, I could not ask for better examples to prove my point about English language writing that is intended to make foreign readers feel superior to the Japanese.

Unfortunately, it was not just these two articles, and not just articles by non-Japanese that lack hard comparative data and were larded with cultural clichés. Two of the worst were written by reporters who are nominally Japanese: Yuri Kageyama and Emiko Jozuka. I will address this issue in future articles.

It is the prominence of the Washington Post and the New York Times that makes the items taken up here singularly important. Both papers have a consistent record of publishing articles and opinion pieces highly critical of Japan, including some that can only be described as overtly racist. I have taken up several such articles in previous JAPAN Forward commentary. It is probable there will be more in the future.

Both the Washington Post and the New York Times clearly manifest institutionalized contempt for the Japanese people. Japanese who subscribe to either should ask themselves why they are paying for such derogatory coverage.

Japanese companies should be asking themselves whether it is worthwhile to advertise in either. If the management does not ask this question, stockholders should.