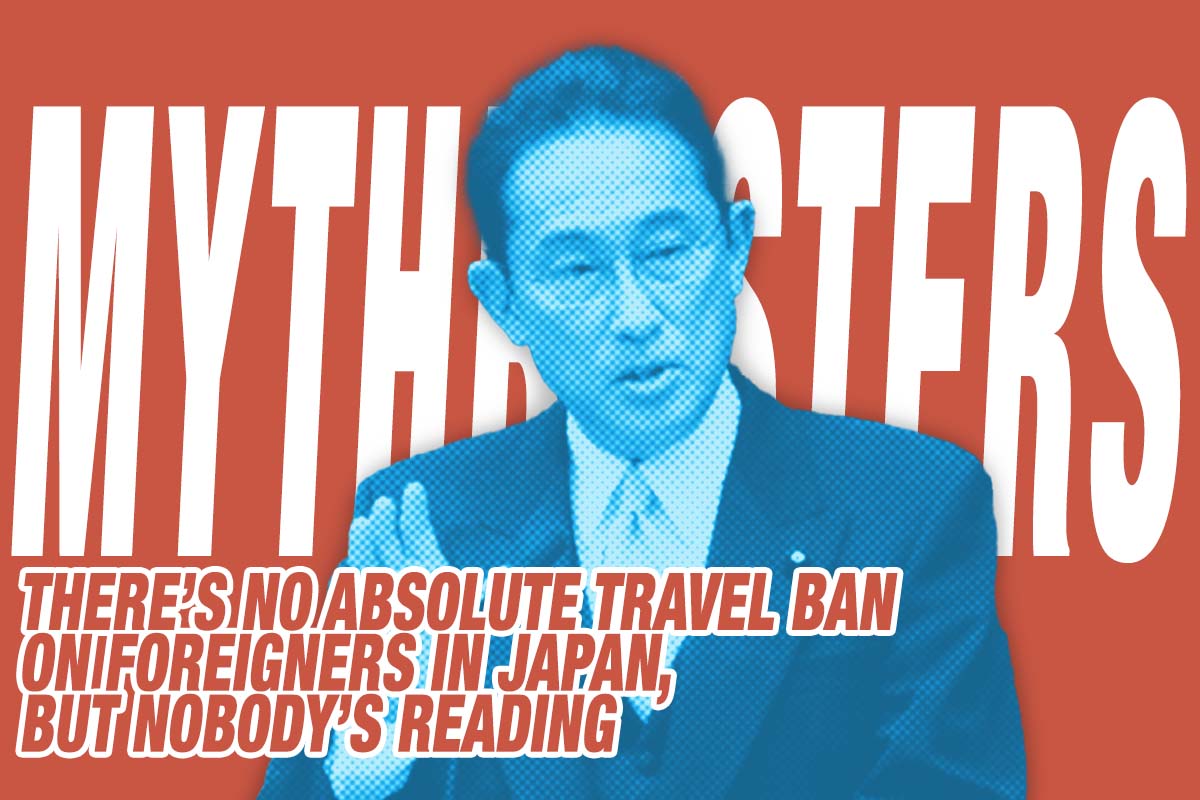 On November 29, Prime Minister Fumio Kishida announced a temporary pause in the admission of foreign nationals without previously established residence in Japan, and then on December 1 the government added temporary new restrictions on flights and travelers due to COVID-19. Both have been widely misreported in both English and Japanese as a blanket ban on foreign national entrants to Japan.

On December 2, Japan admitted there was confusion over its orders and the prime minister directed the government to review its rules, “to ‘adequately take into account’ people wishing to travel back,” it was reported just before noon by Kyodo News. Revised rules were also issued on December 2. (Find the MOFA rules here.) The rules for immigration and airlines are modified as the government sees the situation change, by adding countries to the lists for denial of reentry or special quarantine requirements. Careful reading is required to determine which parts may apply to you.

In the background of Kishida’s decision was Omicron, a new COVID-19 variant that recently emerged, generally causing global chaos in the rush to contain its spread. The speed of its spread caused the World Health Organization (WHO) to label it a variant of concert (VOC) on November 26, 2021.

“This variant has a large number of mutations, some of which are concerning. Preliminary evidence suggests an increased risk of reinfection with this variant, as compared to other VOCs,” said the WHO announcement, as it called for heightened vigilance and reporting cooperation by its member states.

Predictably, irrespective of the purpose for Japan’s temporary pause in loosened immigration, the action brought further claims of racism and xenophobia in English language Twitter posts from foreigners and some Japanese.


Need to Read Before Reporting

Initial reports in both English and Japanese presented the policy shift as a blanket “ban” on “foreign travelers.”

Subsequent reports commonly maintain the blanket ban assertion in the headline but give a somewhat more accurate statement in the article body.

A Reuters article published while this assessment of the coverage was in preparation illustrates the latter point. The headline states “Japan reverses border easing, bars foreign visitors due to Omicron.”

It is only well into the article that the reader learns that “foreigners holding current, resident visas will be allowed back into Japan, as will some diplomatic travelers and humanitarian cases.”

The Japan Times initially reported the new policy as a blanket ban, later amending its account to indicate that it applied only to “new foreign visitors.” No notice of correction was applied to the article itself. Only a Twitter post from a Japan Times reporter noted the correction.

The “ban on new foreign visitors” means the policy impacts primarily students, trainees, and short-term business travelers. Permission for tourists or other general visitors to Japan has not been granted since the early days of the COVID-19 pandemic, and that has not changed under the temporary ban.

A small number of people wanting to visit friends or relatives or to reunite with a fiancé may also be impacted. However, even here, the pause is not necessarily absolute. Ministry of Foreign Affairs (MOFA) statements indicate that exceptions can be made on “humanitarian grounds,” and Japan has been admitting trainees and some students in areas deemed to be in the national interest.

This has all been stated in MOFA documents readily available in English and Japanese on the Internet.

Leaving aside the cases where it appears writers are simply quoting other secondary sources, the misrepresentation may originate with journalists who do not know how to read such government statements.

The really important bits are in the notes, not the body of the text.

Formal policy statements often have one or more supplementary appendices that also must be read to get some sense of how policy might actually be implemented.

While it has been suggested that the initial Kishida statement meant a blanket ban, veteran Japanese reporters should have known that formal policy statements generally do not tell you what will happen in practice.

This should have been noted in the body of the articles if not necessarily in the headlines.

The Japanese government issued new directives to airlines on December 1, following the discovery of another case of the Omicron variant of COVID-19 entering via an air traveler from overseas. The rules and directives are fluid and will likely change again as the variant and its impacts become better understood. With that in mind, from December 1, 2021:

This section will be updated as we learn of any significant new changes affecting travelers.

The policy enunciated by Kishida has been criticized in Japanese language editorials and in English language social media posts as an attempt to avoid the criticism directed at his predecessor Yoshihide Suga, and even more at Prime Minister Shinzo Abe. Both were accused of too little, too late. Even some of Kishida’s own circle said the response was excessive.

Ironically, I have seen the same critics who previously criticized Suga and Abe for doing too little too late criticizing Kishida for doing too much too soon.

It is, of course, very easy to criticize when you do not have to actually make a policy decision and take responsibility for it.

If nothing much happens with the Omicron variant, critics will heap scorn on Kishida and say this demonstrates his incompetence. But, if he did nothing and the Omicron variant was responsible for another infection, hospitalization, and death spike in Japan, the same critics would be heaping scorn on him and proclaiming his utter incompetence to lead Japan.


Racism or Upholding the Constitution

Another repeated claim is that the restrictions in place on entry to Japan reflect racism and xenophobia.

There is no basis for this claim, and it is totally lacking in logic.

The restrictions on foreign nationals lock out people who are 100% Japanese in ancestry and ethnicity if they do not hold Japanese nationality.

Moreover, Japan has treated those non-Japanese with special permanent residency 特別永住権 the same as citizens for purposes of entry and exit. Virtually all holding this status are Korean nationals.

I have not seen a single report in English that notes the inclusion of special permanent residents in the treatment afforded Japan citizens, even though this is explicitly stated in MOFA documents.

“Foreign nationals with the status ‘Special Permanent Resident’ are not within the scope of this entry ban.”

It is, moreover, highly probable that the government would be quite happy to restrict the movement of Japanese citizens if it could legally do so, but our American-written Constitution is very explicit about the right of citizens to change their place of residence (Article 22).

That the pause is somehow a manifestation of pervasive racism and xenophobia in Japan is given the lie by the reports in the Japanese press citing the many business entities in Japan that are unhappy with the policy.

The Universal Declaration of Human Rights to which Japan is a signatory nation also guarantees a right of return for citizens. Japan, unlike some nations, has not abridged this, even for criminals and terrorists.

Finally, those complaining should stop and think. If Japan did not “discriminate in favor of citizens” but instead applied the rules for foreign nationals to citizens, they would still be locked out.

That is the situation for Australian citizens who have been locked out of their own country.

Moreover, while Australia only just started relaxing its border control restrictions, its reverse course — similar to that of Japan — has been described as a “pause” rather than a “ban” in the media reporting on it. The difference in wording is, I think, indicative of a consistent pattern in English language reporting on Japan: harsher terminology for Japan, softer terminology for Anglophone countries.

The Australian government has told international students to “hang in there,” something that would invite the wrath of foreign nationals in Japan on Twitter.

That Israel has also “banned” the entry of foreign nationals while allowing citizens in has done little to reduce the claims that Japan is singularly racist and xenophobic.

I personally would benefit from freer entry of foreign nationals, especially students. I am paying for my son to attend a university that is known for its large number of international students and high degree of internationality. This is what attracted him.

He is now almost finished with his second year, but through no fault of its own, the university has fewer foreign students on campus than we expected. And, if the ban continues, there will soon be no international students, because students graduate and leave the campus every year.

Her students are at the serious, mature end of the spectrum, not the immature manga, animé, and cosplay addicts who account for the many of the whinging comments I see on Twitter. The government should prioritize admitting such students before they lose their enthusiasm for Japan and the Japanese language.

Nonetheless, I see the just-announced pause as warranted under the circumstances. My view is heavily shaped by four decades of dealing with American and United Kingdom students in their home countries and in Japan.

Dealing with British students in Japan was like herding cats. I got my one and only ride in an ambulance in Japan conveying a British student suffering the effects of excess alcohol consumption.

Both British and American students are prone to chafing at what they see as treatment that does not accept them as responsible adults. That they are in a different culture and legally not in fact adults in Japan seems to lead some to deliberate rule breaking.

It is unreasonable for border control authorities to make entry decisions based on subjective evaluations of whether would-be entrants will behave themselves. The Ministry of Education should, however, be capable of giving advice on categories of students to be given entry priority.

For the interim, a blanket pause in new entrants strikes me as the lesser evil among other approaches that might be taken. Letting in a large number of foreign nationals, most with no Japanese language capability and no familiarity with Japan’s institutions and customs, would be an added burden if (when) Japan experiences another infection surge.