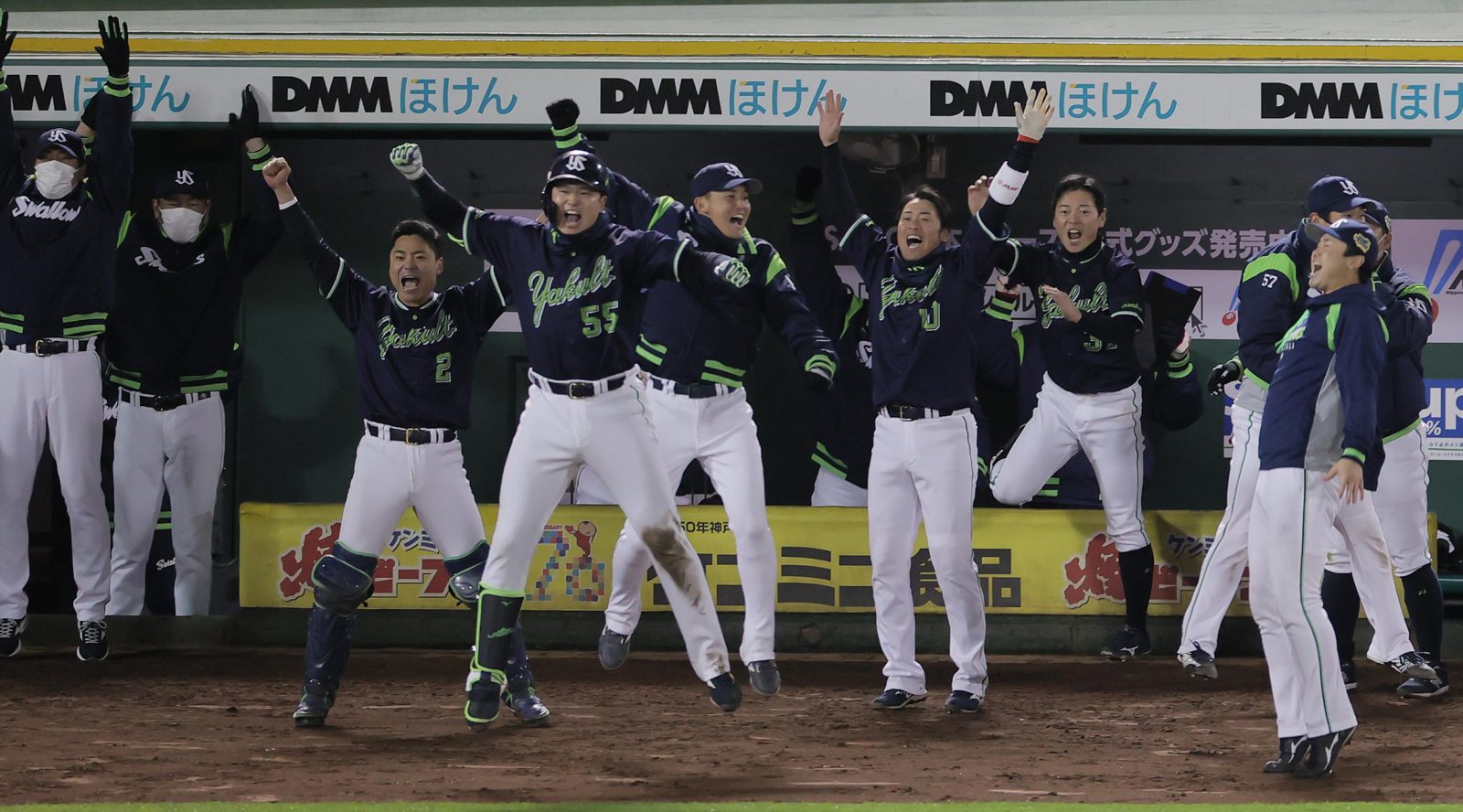 With five of the six 2021 Japan Series games decided by one run, the overall story of how the Tokyo Yakult Swallows won their first Nippon Professional Baseball championship in 20 years was jam-packed with drama.

In fact, this year’s Japan Series was the polar opposite of the Fukuoka SoftBank Hawks’ back-to-back, four-game sweeps of the Yomiuri Giants in the Japan Series in 2019 and 2020.

And by the time the final out was recorded just after 11 p.m. on Saturday, November 27, Swallows manager Shingo Takatsu and his Orix Buffaloes counterpart, Satoshi Nakajima, had witnessed one of the best best-of-seven games series in any pro sport in recent memory. Five games by the thinnest of margins and the other followed a similar pattern (Yakult 2, Orix 0 in Game 2).

The unusual pairing of two teams that had finished last in their respective leagues the previous season added a delightful layer of intrigue to this matchup ー and fresh faces in the Japanese Fall Classic.

Takatsu took over as Yakult’s dugout boss before the 2020 season, with Nakajima handed Orix’s managerial reins in August of the same year.

Game 1 delivered a vivid glimpse of how the Japan Series would unfold. Pacific League batting champion Masataka Yoshida’s walk-off double in the ninth inning lifted the Buffaloes past the Swallows. Orix overcame a 3-1 deficit in the final inning and earned a 4-3 win.

Yakult closer Scott McGough took the loss after failing to record an out in the ninth and allowing three hits and a walk.

Redemption came for McGough, a former Miami Marlins pitcher, later in the series ー along with additional disappointment.

McGough recorded saves in Games 3 and 4, closing out the Swallows’ 5-4 and 2-1 wins at Tokyo Dome.

Then the Buffaloes pounded out 14 hits in Game 5 on November 25, including the big one in the ninth, when longtime former major leaguer Adam Jones belted a pinch-hit solo blast off McGough to give Orix a 6-5 win.

It was absolutely clear that Nakajima understood the gravity of that moment in his post-game comments to reporters.

“Jones really came through for us when it mattered most,” Nakajima said. “I didn’t tell my players much after the last game. They knew what they had to do tonight.”

Both teams knew what they had to do in Game 6. The Buffaloes, playing at their backup ballpark (Hotto Motto Field in Kobe), needed a win (or a tie) to keep alive their title hopes. The Swallows, on the other hand, only needed one more win.

In a pulse-rising test of skills, nerve and managerial tactics, Game 6 was decided by Swallows pinch-hit maestro Shingo Kawabata’s two-out RBI single to left in the 12th inning. That gave his team a 2-1 lead, and then it was all on the line once again for McGough, who was the final pitcher for the U.S. Olympic team in its runner-up finish to Japan in the gold-medal game at the Tokyo Olympics on August 7 at Yokohama Stadium.

McGough retired the Buffaloes in the 12th without allowing a run. He worked 2⅓ innings in the title-clinching game and struck out four without allowing a hit. That triggered celebrations on the field and in the Swallows clubhouse after the game. (And two days after manager Takatsu’s 53rd birthday, the Swallows had another big reason for a party.)

“Although I think that I sometimes made a pitch that disappoints the fans’ expectations, I always kept in mind the best pitch I could [make] and played with all my might,” McGough said after the final game.

It was sweet redemption for McGough and a telltale display in real time of Takatsu’s faith in his closer, despite some struggles earlier in the Japan Series.

The fact that Takatsu was a premier closer for the Swallows and a four-time Japan Series winner (1993, ’95, ’97 and 2001) for Yakult out of the bullpen made a difference. He saw that McGough’s dependability was one of the pitching staff’s strengths this season.

Looking back on the year, McGough noted that “one of my wonderful memories is that I played against my teammates [Tetsuto] Yamada and [Munetaka] Murakami at the Olympics.”

After experiencing the sweet taste of victory, the Swallows will be hungry for more glory in 2022.

“I’ll do my best to help the team win the Japan Series again next year,” he told reporters after Game 6.

Meanwhile, Buffales ace Yoshinobu Yamamoto, winner of the Japan Series’ Fighting Spirit Award, exhibited the same dominating mound presence that was on display throughout the regular season when he led the NPB with 18 wins. Yamamoto was not a pitcher of record in either Game 1 or Game 6, with the outcome of both contests decided after he was replaced by other Orix pitchers.

In the series opener, Yamamoto, the 2021 Sawamura Award winner, held Yakult to one run and five hits in six innings. He had nine strikeouts.

Helping lead Orix to within two wins of a title will be a powerful motivational factor for Yamamoto, who is only 23, and his teammates when training camp opens in February.

In a little over a year, Nakajima has molded the team into a contender and raised expectations that the Buffaloes will be a top club for years to come. Game 1 hero Yoshida, the two-time reigning Pacific League batting champion, is another big reason.

Japan Series MVP Nakamura was a steady leader behind the plate, throwing out two would-be base stealers and effectively handling the pitchers. He also batted a team-best .318 against the Buffaloes.

The 2021 Japanese Fall Classic was bereft of blowouts.

Instead, the Swallows and Buffaloes kept it close, interesting and, above all, presented a kaleidoscope of quality players and games on Japan’s biggest stage.