[Mythbusters] Why Does Biden Want to Send a Foul-mouthed Rahmbo to Japan? 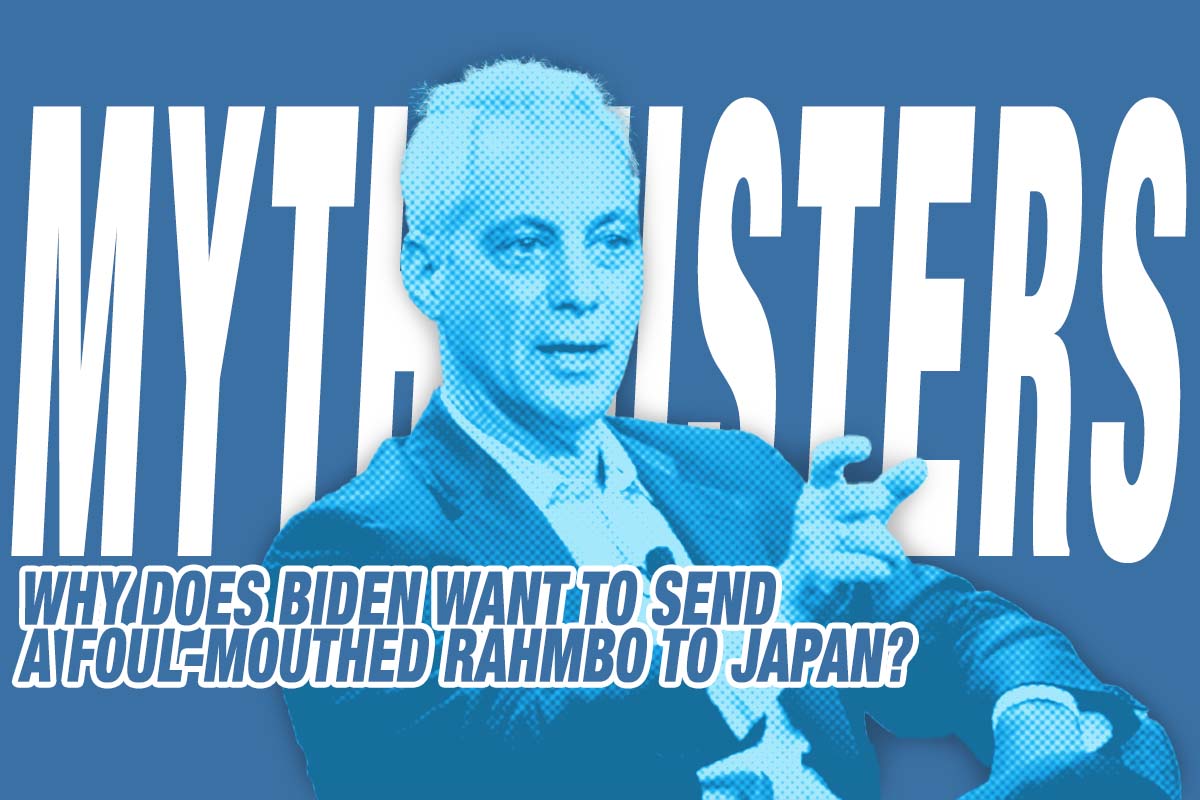 Having grown up in the Chicago area, I maintain a casual interest in the city even though I have not been there for decades and cannot imagine myself ever returning. Typically, I am reminded of my Chicago area connection by news items about another weekend of gun violence in one or more of the city’s numerous high crime areas.

For example, “4-year-old boy among 5 killed in Chicago shootings since Friday evening; 53 others wounded,” a story that appeared on the 4th of September.

I sometimes post such articles to Twitter with a comment, “As the Japan Times and foreign correspondents love to say, Japan lags behind some other advanced countries. Let’s keep it that way.”

This is my sarcastic response to the constant denigration of Japan in English-language media, phrased in terms of alleged Japan lags in this, that, and the other thing.

The most notable exception to this pattern in the last year has been stories that U.S. President Joe Biden was considering former Chicago mayor Rahm Emanuel for nomination as ambassador to Japan, first with speculation in early May, and then the actual announcement of his nomination for the job on August 20.

Then and now the typical article about the former mayor is marked by disbelief and criticism that Biden would appoint Emanuel to a diplomatic post anywhere, especially Japan.

Rex Huppke in the Chicago Tribune lampooned the appointment announcement, describing Emanuel as a “noted profanity” enthusiast and suggested his appointment was rather like something that might be seen in the satirical American television program Saturday Night Live.

Robert L. Borosage, writing in The Nation in an article entitled “Making Rahm Emanuel Ambassador to Japan Would Be a Sick Joke,” elaborated on Emanuel’s propensity for coarse language, saying:

If it weren’t such an insult, the nomination of Rahm Emanuel to be this country’s ambassador to Japan would seem like a perverse backroom joke…. Bets will soon be taken on how long it takes Rahm, for whom “fucking” serves as adjective, adverb, verb, and noun, to issue his first formal apology.

Despite his profanity, Emanuel has on occasion made very subtle statements, the most famous case of this being when he sent a dead and decaying fish to a political enemy.

Sending a dead fish is the physical expression of a Sicilian mafioso curse, “You will sleep with the fishes,” essentially the same idea as telling someone they will become sharkbait.

Since Emanuel has an Israeli ー not a Sicilian ー background, he probably got the idea from The Godfather, which has an episode in which a dead fish wrapped in a bullet-proof vest is sent.

His propensity for retaliation against those he thinks have crossed him is the main factor behind the Rhambo play on Emanuel’s given name. In the Rambo films, the character of that name engages in a series of violent rampages in order to avenge what he sees as slights directed at him.

More detail about the dead fish incident and other examples of why Emanuel has been given the nickname Rahmbo can be found in this Japanese-language article by Yoshihisa Komori.

While some may find his “straight talking” refreshing, there are much more substantive criticisms of Emanuel.

In 2014, Chicago police shot 16 times a young Black man who was walking away from them. Emanuel withheld a police video showing the shooting, claiming that he did not want to prejudice an ongoing investigation, even though the justice department said it had no objection to releasing the video.

This was not his only action that was widely perceived as anti-Black. He closed a large number of schools in predominantly Black neighborhoods, and shut down a large fraction of city mental health clinics, primarily on the South Side, again a predominantly Black part of the city.

Critics of his policies as mayor say his policies were intended to help developers gentrify parts of Chicago and to push Black people out of the city.

He was also known for fighting against calls for police reform in Chicago.

While his actions as mayor of Chicago are not directly relevant to anything he might be doing as ambassador to Japan, his record as mayor is relevant in terms of knowing what kind of person he is.

His Record Outside of Chicago

Being a city mayor in the United State is not typically a path to an ambassadorship even in a country where plum appointments go to political hacks rather than career diplomats. Emanuel does, however, have an extensive record as a politician in the U.S. national government.

He served in the U.S. House of Representatives (2003-2009) and was senior advisor in the Clinton administration and served Obama as White House chief of staff.

That he was not given an immediate high position was somewhat surprising. One explanation, Borosage writes, is that: “Progressive opposition is widely credited with derailing Rahm’s campaign to get Biden to name him transportation secretary. The ambassadorship was probably considered a consolation prize in the White House.”

Although some accounts credit Emanuel with considerable administrative skills, it is more probable that his role in the Clinton and Obama administrations was due to his skill as a fundraiser. He is known for his ability to get funds and support from what at one time were called limousine liberals.

This pejorative term from the early 1970s has been applied to well-off and very rich Americans who nominally support liberal causes, as long as their financial contribution brings a tax write off, and reforms ostensibly aimed at helping the American underclasses do not threaten their wealth or power.

Specific examples of this in the case of Emanuel include his ability to raise money from North Coast liberals in Chicago and his connections to Goldman Sachs.

The North Coast of Chicago, which includes the so-called Gold Coast, is a favorite for those with an income that enables them to live in one of the most affluent residential areas in the U.S. It is a world away from the predominantly Black and impoverished SouthSide with its weekend shootings.

Goldman Sachs plays at social programs. Articles about Kathy Matsui and her womenomics never fail to mention her Goldman Sachs affiliation, and it published her reports claiming that bringing more women into the Japan workforce and promoting them would add 13-15% to the GDP while furthering gender equality.

The same Goldman Sachs has paid billions in fines and compensation for illegal dealings and securities violations in a number of countries, including a $3.9 billion payment to Malaysia in July 2020. There are websites dedicated to Goldman Sachs violations and settlements.

Goldman Sachs is also known for punishing work schedules. In March of this year, Goldman Sachs analysts went public with complaints about 100-hour work weeks. In 2015, it had “capped” the workday for interns at 17 hours, which would still mean an 85-hour workweek (5 days) or a 102-hour workweek (6 days), assuming the cap was enforced.

Those who try to find something positive in Emanuel’s nomination basically have one and only one talking point: Emanuel is a direct line to President Joe Biden.

Those making this point offer no concrete examples of how this might be beneficial to Japan.

It is also dependent on Joe Biden being president. He will be 79 years old on November 20. He appears to be in good health, but there is no guarantee he will stay that way. Whether the pipe would remain in place if Kamala Harris became president is another question.

There is little in his record to indicate where he might stand on trade or military issues other than his support for the Trans-Pacific Partnership repudiated by Trump in 2017, and a widely reported but vague statement, “It’s either tanks or cars.”

His most noted foreign connection is to Israel. In 1991, during the Gulf War, he was briefly a civilian volunteer at an Israeli military base. His father was an Israeli.

There are no significant issues between Japan and Israel, but it is not hard to imagine Emanuel’s shoot-from-the-lip style doing something to complicate relations between countries hostile to Israel and Japan. That Emanuel holds both U.S. and Israeli citizenship might be a further complication.

Because ambassador appointments must be approved by the U.S. Senate, there is the possibility that Emanuel might not be confirmed. Left-wing Democrats are not happy with his nomination. Republicans would probably enjoy embarrassing Biden.

Even if his appointment is confirmed, there is no indication when that might be. The Senate has a backlog of several hundred appointments to consider.

What can be said at this stage is that, despite repeated statements about Japan being the linchpin of U.S. Asian policy, that is not indicated by the nomination of Rahmbo Emanuel. The Biden nominee for China is a veteran diplomat, whereas his nominee for Japan is a foul-mouthed Rahmbo loathed by many in his own party.