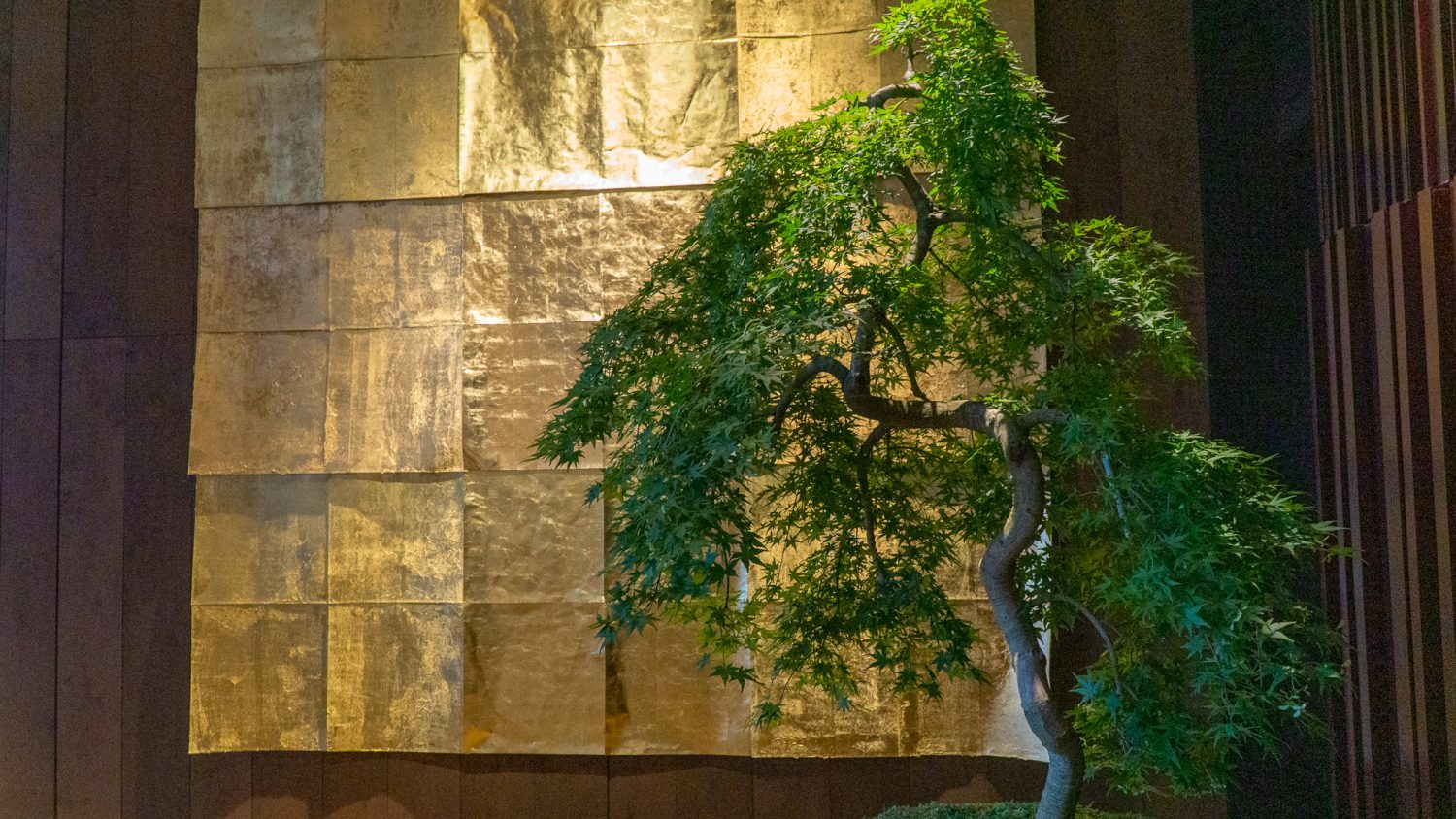 The Hyatt Centric Kanazawa hotel showcases some of the best of local arts and crafts.

(Eighth in a series)

You can’t miss it. From meters away approaching the entrance of Hyatt Centric Kanazawa hotel you are greeted by an awe-inspiring sight.

On a large background of a navy-blue painted canvas, a gold leaf Japanese pine tree design jumps out at you in the distance.

You walk closer, and you realize that there is far more to it than meets the eye at first glance: the tree design is made out of metal scissors and tools.

The art piece is a sign of what is to come as you ascend to the lobby.

The hotel, with its 253 rooms, features more than 100 pieces of craft and art pieces, mostly sourced locally from Ishikawa prefecture and other artists with a connection to the region.

With it’s pop and modern feel grounded in tradition, the hotel is a great example of how craft doesn’t have to be relegated to a museum, but is something cool and inspiring.

The hotel project was done in collaboration with BOND DESIGN STUDIO Inc (bond). The studio has worked with many upscale companies in the international hostelry business, including the Rosewood and Shangri-La hotel chains.

The design enterprise was started by Ryoichi Niwata, a Japanese creator with extensive experience abroad.

“This [Hyatt Centric Kanazawa hotel] was Niwata’s first project in Japan,” explained Fumi Kimura in an interview on August 13. “Mr. Niwata has a very interesting point of view, because he manages to mix sensibilities from the West and from Japan.”

The Hyatt Centric Kanazawa hotel was unveiled in August 2020. It may be new, but it hasn’t sacrificed the cultural roots of the Kanazawa region, which is famous for its arts and craft, sometimes more generally referred to as kogei.


Japanese Craft in the 21st Century

A key appeal of the hotel is that it exudes a modern, chic feeling, while being grounded in the rich culture of the region.

This is seen in the many pioneering art pieces peppered around the hotel. For example, on the first floor a kimono is displayed on a stand, called “Map of Kanazawa,” or Kaganokuni Rust Arabesque.

As the name suggests, the kimono has a pattern of an Edo period map of Kanazawa drawn on the fabric. Surprisingly, it is very similar to a modern-day blueprint, with colorful designs and dyes superimposed.

The design by Ruri Mitsuo combines modern inkjet and silk screen printing, together with the original dyeing technique of combining rust and natural dyes.

Another space which draws from Kanazawa’s history is found on the second floor, which is dedicated to events. The concept is inspired by Kenrokuen, one of Japan’s Three Great Gardens, which finds its home in Kanazawa.

The presence of a soft green both in the carpet and in the décor, the floral and pine tree motifs, and the stunning colorful paper screens transport you to a peaceful environment the likes of the famed garden.

Walking Into the ‘Home of a Collector’

Coming off the elevator on the lobby level and turning right, there is a majestic panel covered in gold leaf. The craft it is made from is carefully preserved in Kanazawa, which is said to provide over 99 percent of the gold leaf made in Japan.

In the middle of the lobby sits a magnificent reception desk featuring an intriguing lacquer-covered sculpture.

A reproduction of kimusuko, made to reproduce the wooden buildings of the historic tea district in the city.

In the midst of all this, the atmosphere in the bar and restaurant area has a certain appeal.

As general manager Kei Takahashi put it: “The objects are not displayed as they would be in a museum. They are sort of put out as if it was the living room of a collector.”

“This makes it very personable, and easy for customers to feel at ease in the space” Takahashi happily concluded.

The thoughtful and at times playful interior design accompanies customers all the way into their rooms. The number plates outside the doors are made out of Kutani-yaki, a local brand of richly colored china plates.

Inside each room there is a rabbit shaped Daruma doll, a tribute to the local literary figure Izumi Kyoka, who always placed rabbit motifs next to him for good luck.

Finally, some art pieces aim to convey the idea of sustainability, and how the local crafts are grounded in the idea of no-waste.

One example is a large canvas placed in the corridor.

Over the canvas, squares of recycled leather are displayed orderly. The leather comes from shamisen instruments, and from the process of gold leaf decorations.

The material, which is normally just disposed after use, in this case has been repurposed and given new life, and recycled to show the beauty of materials used in the crafting process. Funnily enough, the tiles painted black also resemble the typical black roof tiles which can be seen in Kanazawa city.


Hotels as A New Way of Showcasing Culture

All in all, it’s clear that the hotel is ambitiously reaching out to set itself apart, even among the many beautiful establishments of the Hyatt Hotels & Resorts chain.

“If you want an example of how crafts can be successfully incorporated into a modern setting, I think that the Hyatt Centric Kanazawa hotel is a great example,” said Grand Tea Master of Hoshinkai and expert in traditional crafts Soshin Kimura in an interview on August 13.

Fumi Kimura, stressed in turn the importance of using hotels as a stage for local crafts.

“In order for something to be showcased,” she said on August 14, “you need people to look at it. And in that sense, if there are many objects in a hotel for international guests to see, hotels are a great vehicle.”

This part of a series delving deeper into the ideas presented at the 2021 International Kogei Summit. Craftsmen and experts share their views on the future of kogei, and discuss the ways in which Ishikawa Prefecture is showcasing Japanese culture. Find other articles in the series here: