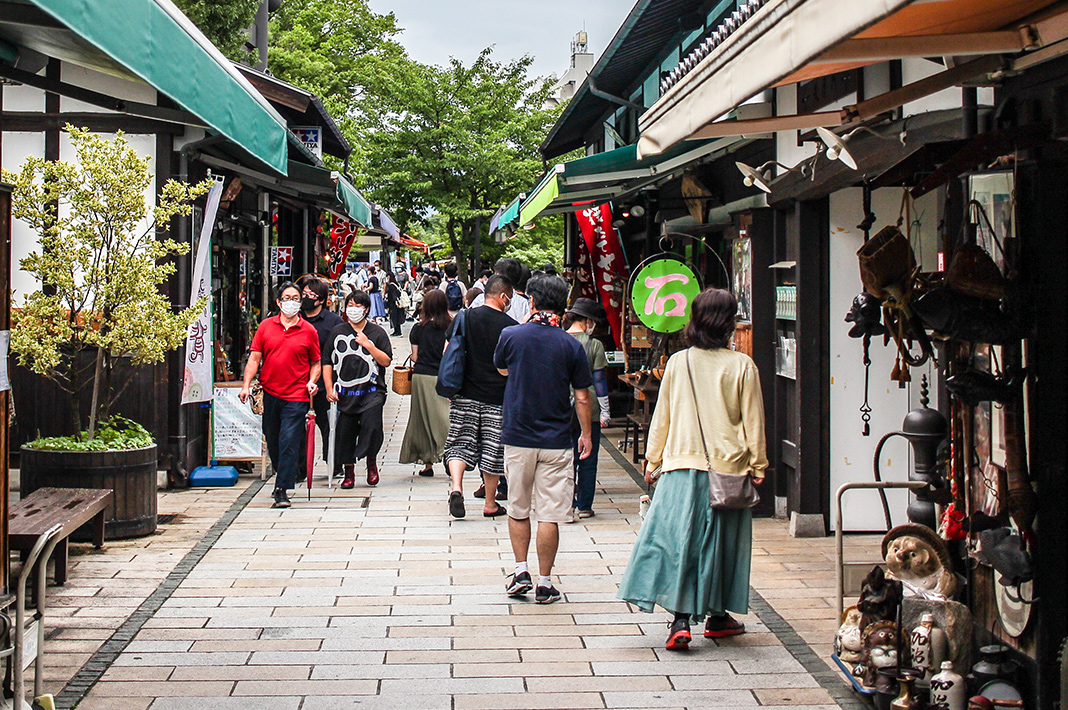 A visit to the mountain city of Matsumoto wouldn’t be complete without a stroll down Nawate Street. Just 10 minutes’ walk from Matsumoto Castle, the quaint Nawate-dori looks as though it’s been plucked from the pages of history. As you make your way along the paved thoroughfare, you’ll spot everything from homewares to bric-a-brac, fish-shaped taiyaki to sushi-shaped fish.

Between the wooden shops, you can enjoy glimpses of the Metoba River which runs alongside the street, adding to the peaceful atmosphere. And as it’s a one-stop-shop for food, retail therapy and plenty of other surprises, Nawate Street is high on the list of things to do in Matsumoto.

You’ll be greeted at the entrance by a statue of three frogs locked in fierce battle—the first of many amphibian motifs you’ll see along what is affectionately known as ‘Frog Street.’

The name refers to the Kajika frogs that lived in the Metoba River long ago, as much a part of the city’s chorus as the Yohashira Shrine bells, the footsteps of pilgrims and the calls of shop vendors. When a 1959 flood destroyed their habitat—and Nawate Street along with it—the frogs relocated, but their legacy lives on in the ceramics and signboards throughout the alley.

A decade or so after the devastating flood, efforts were made to revitalise the area and, as is common in Japan, a commemorative mascot was created. “Kaeru Daimyojin” the frog (kaeru) is enshrined at a small shrine about half way along Nawate street, and exists as a symbol of rebirth. After the store holders returned, Nawate dori started to return to its former glory.

(You can read the rest of the article at this link. This article was first published by Team JJ on January 2, 2022. Check here for deeper and unique insights into visiting Japan, including wellness, travel, cuisine and more. Find us on Instagram and on Facebook.)