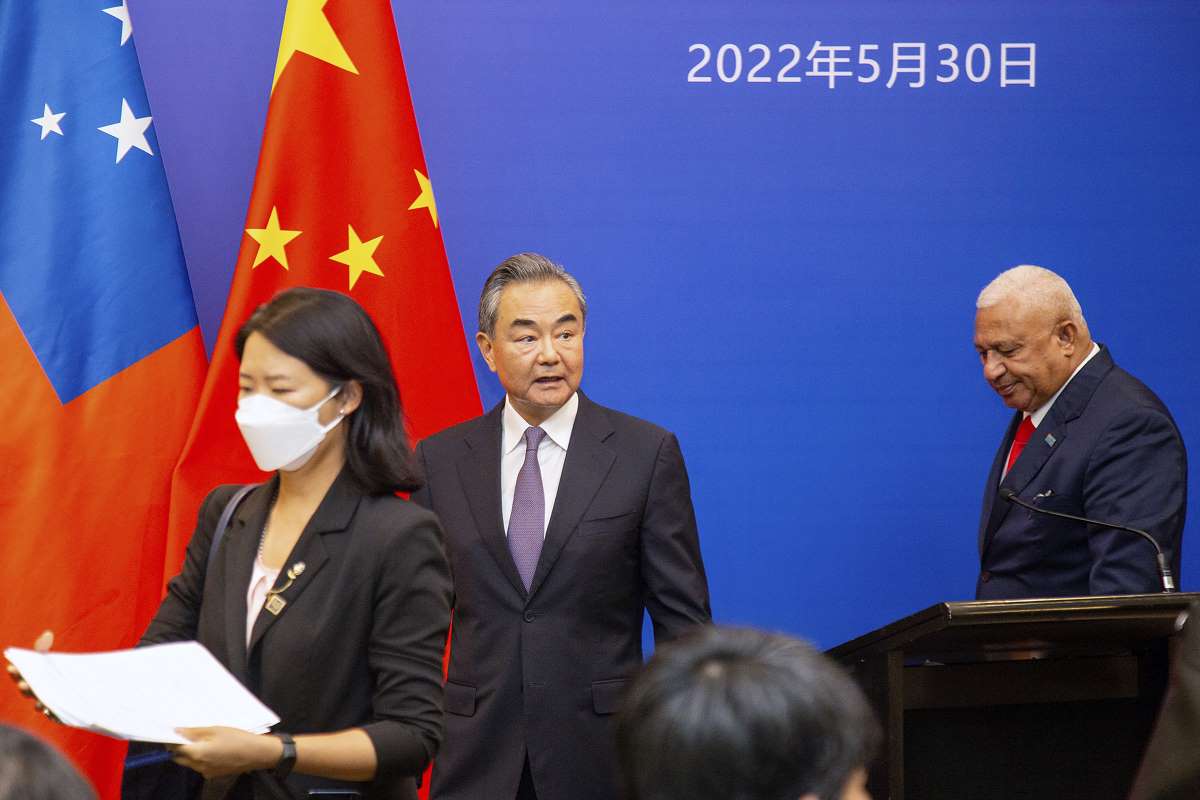 China’s ongoing effort to establish a military presence in the Pacific represents a growing challenge to the concept of a “free and open Pacific.” Democracies, especially Japan, the United States and Australia, must work together to deter this expansionism.

While in Fiji on May 30, Chinese foreign minister Wang Yi held an online summit with regional leaders, including his counterparts from the eight island nations he visited during his diplomatic swing through the South Pacific. They discussed but could not reach agreement on a pact proposed by Beijing that would greatly strengthen collaboration between China and countries in the region, including in the realm of national security.

Nonetheless, as confirmed by Chinese President Xi Jinping’s stated desire “to build a community with a shared future,” China has by no means given up on its desire to ratchet up its security ties with countries in the region. Beijing will now likely shift to a strategy of splitting off one Pacific country after the next into its orbit. We must maintain a high level of guard against this approach.

The exclusive economic zones (EEZ) of the 14 Pacific Island nations are enormous. Expansion into these seas by a China that blithely ignores the international rules should not be allowed.

Moreover, the region is extremely critical from a military perspective. The Republic of Kiribati, for example, is located relatively close to Hawaii, home to the United States Indo-Pacific Command (USINDOPACOM), as well as Guam and the Marshall Islands where there are also US military bases.

In the South China Sea, China has built several artificial islands, on which it has placed runways and other military installations. If it were to do the same thing on islands in the South Pacific, that could have a major impact on the security environment in the Asia-Pacific region, including in the event of a Taiwan emergency.

Just this April China concluded a security treaty with the Solomon Islands. According to leaked reports, the pact allows for the stationing of Chinese troops, port calls by Chinese military vessels and even the dispatch of Chinese police to maintain domestic order.

The Solomon Islands was the first stop on Wang’s whirlwind tour of the South Pacific, and there he declared that “China does not intend to establish military bases.” Nevertheless, China and the government of the Solomon Islands have refused to release the details of the agreement, and we cannot take their statements at face value.

News of the unexpected agreement shocked Japan, the United States and Australia, and the Australian foreign minister flew to Fiji and other destinations in the region in a bid to play diplomatic catch-up. Since then, Fiji has also announced that it had decided to participate in the new US-led Indo-Pacific Economic Framework (IPEF).

Although the Pacific Island nations enjoy rich fishing grounds, they are geographically far from international markets and are fragile in the face of damage from climate change and natural disasters. Assistance from foreign countries is therefore critical for their survival.

At the recent Quad Summit in Tokyo leaders from Japan, the United States, Australia and India vowed to enhance cooperation with island nations in regards to climate change countermeasures, dealing with economic conditions and the monitoring of illegal fishing activities. Those pledges were certainly appropriate, but they now need to be steadily translated into action.

Every three years since 1997, Japan has hosted the Pacific Islands Leaders Meeting (PALM) to which it invites the leaders of nations in the region. These meetings, which aim to support shared universal values such as democracy and rule by law, have strengthened ties among the participating nations. Japan should now coordinate with the United States and Australia in implementing further assistance measures.