New Flavors to Savor: The Blossoming of Tree-based Alcoholic Drinks 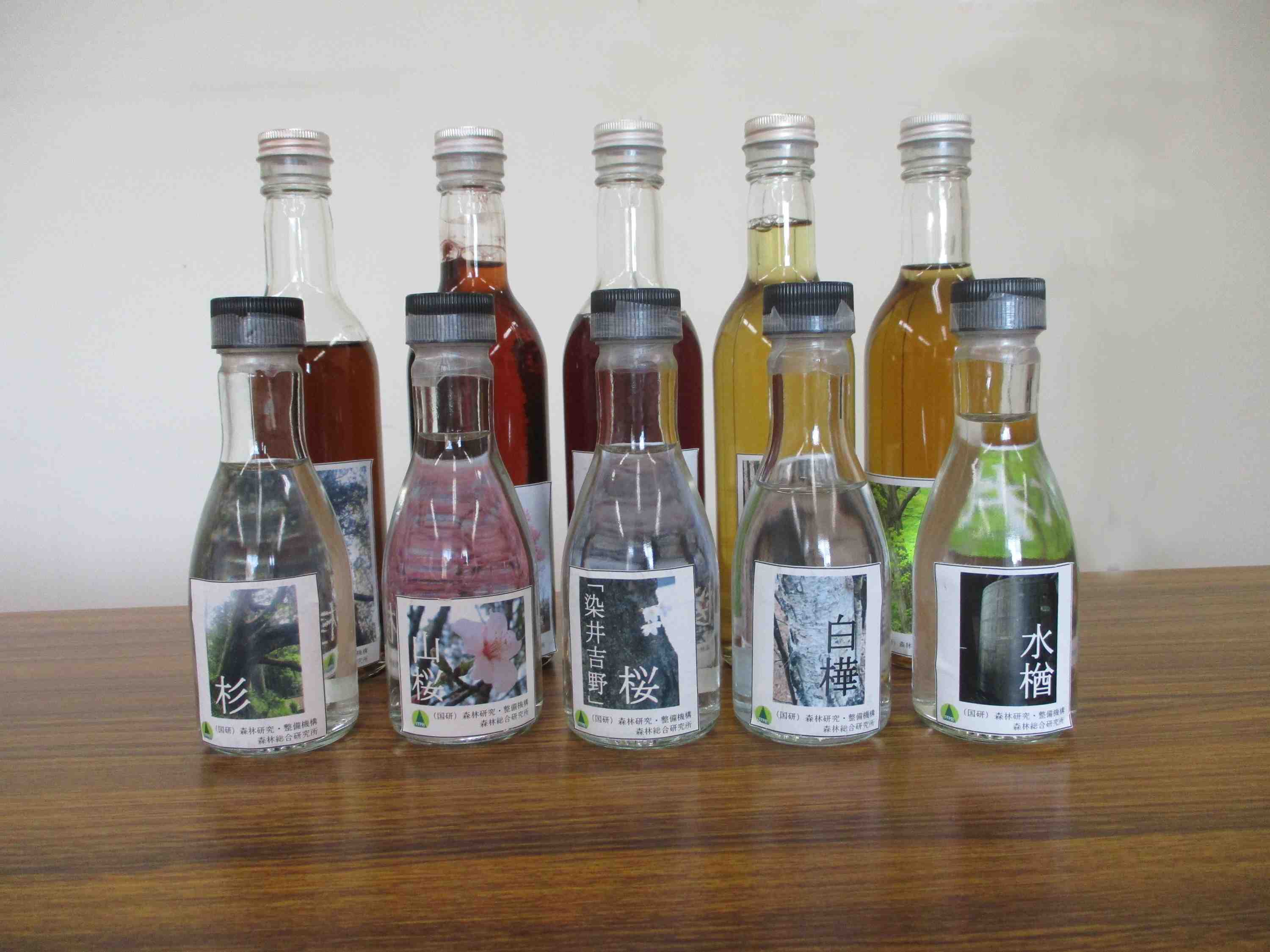 A new era has dawned in the history of an activity that stretches back to mythological times in both the East and the West - brewing liquor.

For thousands of years, the brewing of alcoholic beverages has revolved around ingredients such as fruit, grain, root vegetables, and milk from farm animals. Using wood itself had never been considered.

The cellular walls of wood contain glucose, a key ingredient in alcohol fermentation. But the glucose is blocked by the hardness of lignified cell walls, which prevents it from being used up in the brewing process.

However, a research team at the Forest Research and Management Organization (Tsukuba City, Ibaraki Prefecture) has made a breakthrough – becoming the first people in history to solve the issue of the cellular walls of wood.

The research team is pressing ahead with the trials, including brewing liquor from various types of trees, such as cedar and cherry. All of them possess a wonderful aroma. The innovative beverages are set to become commercial products in the near future. 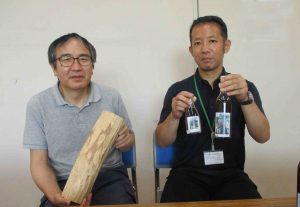 Distilled Liquor with a Woody Scent

Masanobu Nojiri and Yuichiro Otsuka, researchers directly involved in the project, explained further. Nojiri is team leader of the organization’s Department of Forest Resource Chemistry, and Otsuka is a chief researcher.

At the start of the interview, they gave me a chance to appreciate the essential aroma of the tree liquor.

The cedar tree liquor reminded me of conifers, while the cherry tree liquor was reminiscent of sakura-flavored rice cakes. The white-birch version was sweet, and the mizunara variety (a native Japanese tree sometimes called a type of oak) had a smoky scent. Each one had its own characteristics.

Each of the tree liquors is clear and colorless, distilled with an alcohol concentration of about 20 percent. Prior to fermentation, the unprocessed liquor is a combination of colors, however, such as red and yellow. It looks appetizing but apparently tastes unpleasant.

“Distillation brings out the best in tree beverages, as though it’s been polished,” Nojiri and Otsuka both explained.

Revolution in the History of Brewing

Strictly speaking, tree-based liquor has been produced previouslyーfor fuel. During a bioethanol boom about 20 years ago, wood began to attract attention as a non-edible raw material.

However, because vitriol oil and high temperatures were used to destroy the cell walls, there were harmful substances in the finished product, making it unfit to drink.

To make beverages from wood it is necessary to gently loosen the cell walls, and then expose the cellulose chained to the glucose that forms the key ingredient in the alcohol fermentation.

The research team at the Forest Research and Management Organization used a ceramic ball that is 2 mm in diameter. After adding water to tree powder pulverized by a machine and then continuously stirring in multiple ceramic balls, they produced superfine wood particles that are 0.001 mm in diameter.

Adding enzymes that break down cellulose to this superfine-particle liquid, the cellulose chain is divided and changes into a collection of individual glucose components.

By then applying yeast, the alcohol fermentation starts and the unprocessed alcohol is formed. Distilling that unprocessed alcohol results in a clear tree liquor with a unique tree-like scent and flavor, as though it has been flowing naturally in a rock-filled stream.

One kilogram of dried wood is now enough to make 300 mm of distilled cedar-tree liquor with an alcohol concentration of approximately 30 percent. 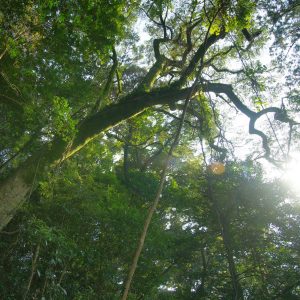 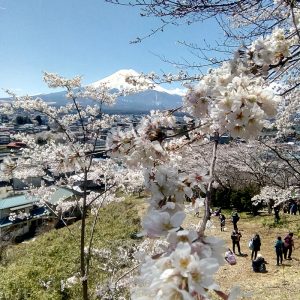 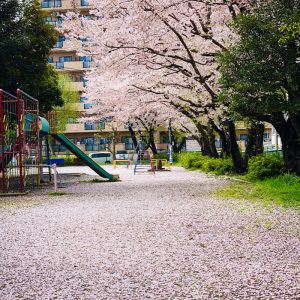 Economic Stimulus for a Mountain Village

We began daydreaming as the meeting wore on. We were enjoying some cherry tree-liquor while sakura petals were floating in the air. If the Japanese poet Saigyo Hoshi could know about this moment, he would surely be content.

Pure plum wine can also be made directly from plums, providing a pleasant alcohol-based taste sensation. Even old wood can be used to make tree liquor, which means you can get drunk on a piece of history.

Acquiring the know-how to make alcohol from cellulose stored in the cellular walls of hardwood, as opposed to fruit pulp or sap, revolutionary in the history of alcohol brewing.

The climate and culture of countries across the world are deeply connected to forests. In Canada, maple liquor was probably created as a result of tree-related techniques. I wonder what kind of liquor could be extracted from the Black Forest in Europe? How about jungle liquor from tropical rainforests? It is fun just to imagine, but with new uses emerging in Japan for wood thinned out through forest management, tree liquor can also contribute to forest preservation.

“Let’s bring out the diverse values of wood through alcohol.” The team’s applied research is deeply rooted in a sense of enterprise.

The team began researching converting wood into alcohol in the fall of 2017, after receiving a trial manufacturing license from the National Tax Agency. Haruo Sawada, who was president of the Forest Research and Management Organization until March 2020, said, “Give it a go,” which inspired the team to proceed with their mission.

Motivated to Start a Brewery

Combining green bamboo with sake improves the taste. In that case, how about bamboo liquor? Creating such a product could also solve the issue of abandoned bamboo.

I even suggested the name “panda liquor” to Nojiri, but he instantly rejected the idea of such a drink. It seems that the scent of bamboo changes as the plant grows, and the plant often emits the aroma of bamboo shoots – which is not ideal. Conversely, white birch has a mediocre scent, but once converted into alcohol, it boasts a sweet aroma.

The world of tree-based alcohol is as deep as a forest. The research team plans to complete its ongoing safety study in cedar tree liquor this fiscal year. Already, a number of brewing companies are reported to have expressed an interest in tree liquor. The incentive is there for the research team to develop a high-class liquor from the forest, with high added value.

A story so promising you can hear Bacchus, the god of wine, cheering them on.

(Read this column in Japanese, here.)