[Speaking Out] What Happened to Free Speech and Academic Freedom in South Korea? 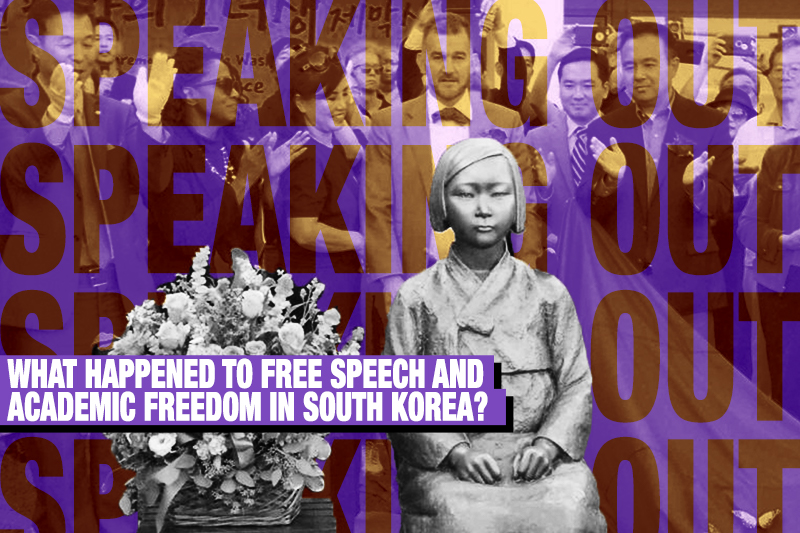 On July 2, South Korean National Assemblyman Song Young Gil, who chairs the assembly’s Foreign Policy and Unification Committee, held a press conference to announce that a criminal complaint would be filed against Lee Yong Hoon, the editor and author of the book Anti-Japan Tribalism, a bestseller in Japan and South Korea, and his associates, Standing alongside Song were the family members of former comfort women and wartime workers in Japan.

Lee and his co-authors are accused of defamation, violation of the National Security Act and other criminal behavior. Yonsei University professor Yu Seok Chun, who was punished in a disciplinary action by university authorities for taking up the book in his lectures, is also among those accused.

Song, a member of the ruling Democratic Party of Korea, criticized the book as a serious distortion of history and absolutely intolerable.

The Battle of Complaints

At Song’s press conference, an attorney representing the complainants said,

The authors made the awful assertion that comfort women for the Japanese military had been prostitutes, that Korean wartime workers in Japan had not been coercively recruited but had been given rare opportunities to make fortune, and that the Dokdo Islands (called Takeshima Islands in Japan) were a Japanese territory and should be returned to Japan.

One of the group of family members of former comfort women and wartime workers emotionally accused the authors, saying, “They made my blood boil.”

The formal complaint against the Anti-Japan Tribalism authors and Professor Yuwas filed a few days later on July 7, by nine family members and Lee Yong Soo, a former comfort woman who has recently made news by criticizing a South Korean organization supporting comfort women.

In response, Anti-Japan Tribalism authors Lee Yong Hoon, Ju Ik Jong and Lee U Yeon, along with Professor Yu, held a press conference the same day at the Seoul Press Center, in which they harshly criticized their accusers and vowed to file a counter suit against Song and the complainants for defamation. Specifically, Lee and his colleagues asserted that the three points cited by the Song side as a distortion of history were not found in their book, Anti-Japan Tribalism or in its sequel, Struggle Against Anti-Japan Tribalism.

The authors described the three accusations as false points forged by some of the media, and doubted if the Song side had even read Anti-Japan Tribalism. They explained that the assertions made in the book were based on their academic research, and that they had repeatedly offered open discussion to those advocating theories running counter to their assertions.

The authors and scholars emphasized that the Song side’s remarks unilaterally concluded that their book distorted history, without academic debate. They added that the charges against them represented a grave infringement on free speech and academic freedom.

After winning 60% of the National Assembly seats in April’s general election, the Democratic Party of Korea has monopolized the unicameral assembly’s committee chairs. Earlier those positions had been distributed among many parties, in line with a party-by-party breakdown of the assembly seats. As a result of the election, however, the Democratic Party of Korea has self-righteously taken management control of the legislature, allowing itself to do anything except constitutional amendments.

Among other things, the ruling party’s lawmakers have submitted a bill that would criminally punish for distortion anyone with an opposing interpretation of the May 18 Gwangju Uprising, which the party describes as a democratic movement. (The May 18 Guangju Uprising was an armed rebellion of students and other citizens against martial law forces in 1980.) The bill would establish a special commission to investigate those accused of distorting the preferred interpretation, with the right to arrest and punish the accused for up to seven years in prison.

A bill to ban pro-Japan remarks is also being prepared. Separately, Democratic Party members have submitted another bill to punish those with differing views for distorting history.

Free speech and academic freedom form the backbone of democracy. Will South Korea go in the direction of totalitarianism? Can the move be stopped? I would like to closely watch the struggle of Lee Yong Hoon and his group.

(A version of this article was first published by the Japan Institute for National Fundamentals, Speaking Out #701 on July 15, 2020.)