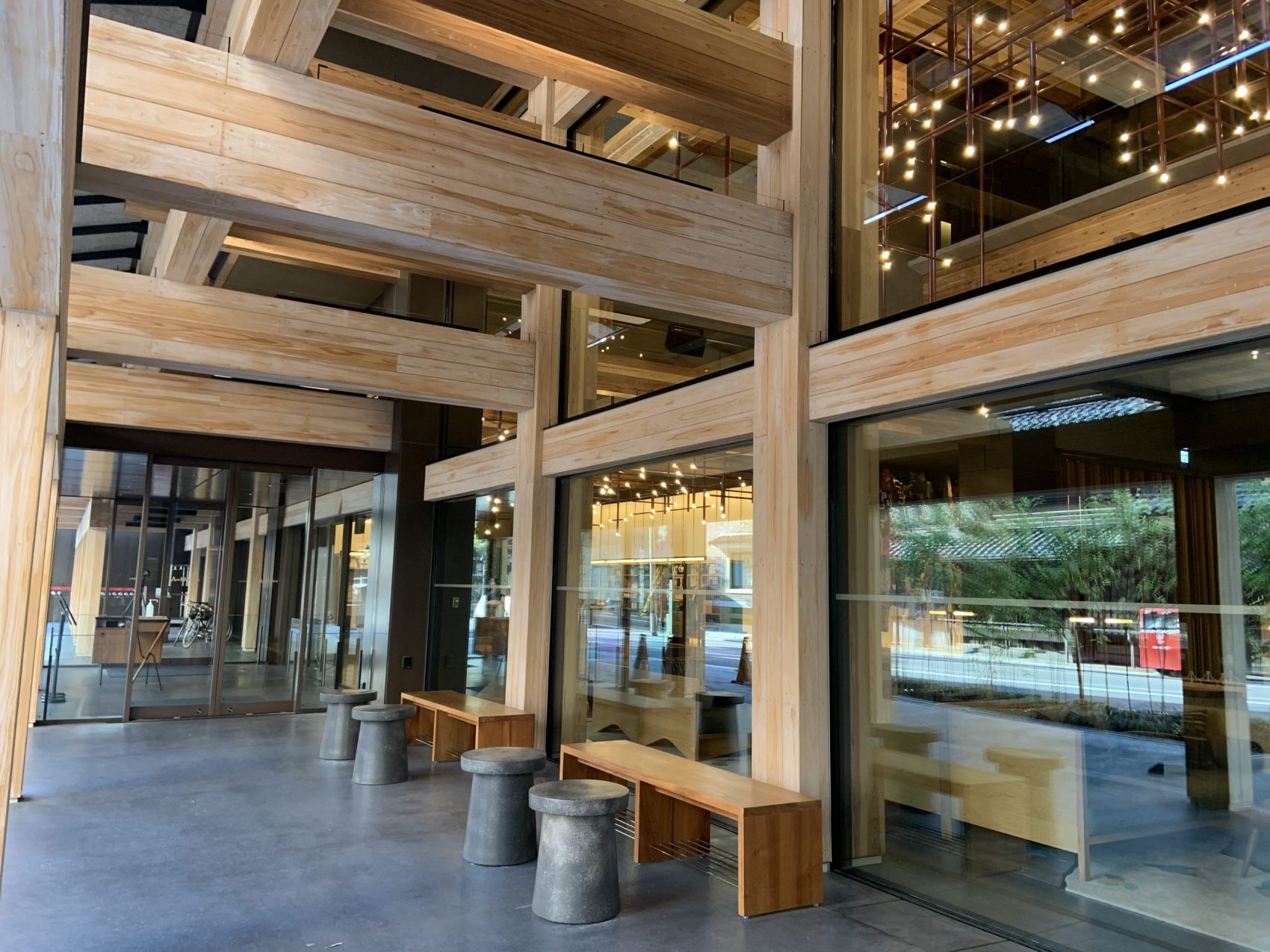 Recently I had the opportunity to visit Ise Jingu in Mie Prefecture, a highly venerated site known as the heart and soul of Japan’s Shinto history. While walking through the sprawling keidai (shrine grounds), I experienced a moment’s repose, surrounded by lush, looming cedar trees, cypress, and low-spreading camphor and sakaki evergreens.

Sunlight poured out over the deep greens, emitting gentle beams of light filtered by layers of soft, earthy colors juxtaposed with the rough, shadowed textures of the ancient tree trunks. Along with the wooden shrine structures themselves, the Jingu’s forest felt magnificently austere, and elegant as well as powerfully energetic: a forest that is indeed breathing.

Upon my return back to the steady urban context of Kyoto, I found myself gazing up at Ace Hotel Kyoto inside of Shinpuhkan, which opened during the summer of 2020. Shinpuhkan is based around a former telephone company redesigned by renowned architect, Kengo Kuma into an upscale shopping, hotel, and theater complex. Despite the vastly disparate context and scale, there is a resonance between the spatial experience of Ise Jingu’s forest and the commercial built environment of Shinpuhkan.

For one, there is the noticeably generous presence of wood. But it is not just this material element that links the two sites. There is the response drawn out through the use of wood.

Sunlight is received and then let loose to playfully emanate in between the gaps, the corners, along the lines, and amid the points of intersecting planes. The wooden beams of Ace Hotel Kyoto are assembled in layers of interlocked joinery supporting large, spacious eaves, guiding the sunlight entering in, a characteristic commonly found in traditional Japanese architecture.

Shinpuhkan’s affinity in responding to nature is representative of Kuma’s recurrent design exploration, one that is deferential to the natural landscape, context, and local craft.

As the world continues to grapple with new lifestyles and spatial connections sifted by the coronavirus pandemic, Kuma’s philosophical and aesthetic concepts sheds light on what it means to prioritize adaptability and familiarity. As we continue processing the new meanings of architecture in a pandemic world, JAPAN Forward asked Kuma about what the future outlook may reveal and what we can be on the lookout for.

Embedding Nature Among Us

One of Kuma’s key concepts since establishing Kengo Kuma & Associates in 1990, is creating “defeated architecture.” It is a form that seeks to humbly coexist within its surroundings, whether that be a dense urban setting or the rural countryside.

For Kuma, this is often done through reexamining the Japanese environment and its structural conditions as a constant source of inspiration and experimentation.

“Japan is a country that has many forests and very few flat areas. So, in that kind of highly dense environment, traditional Japanese architecture had to gather all kinds of wisdom to create a comfortable space,” said Kuma.

“Additionally,” he continued, “The material, namely wood and its natural characteristics is something the Japanese have a special memory towards. From ancient times, soft, malleable wood that can easily be cut and fixed was used to create intimate spaces. Because of that, a comfortable space can be created even in a dense area.”

Wood. It is Kuma’s signature material that takes center-stage at Shimpuhkan in Kyoto as well as large-scale projects such as the Japan National Stadium designed for the 2020 Tokyo Olympics. The National Stadium is itself, conceived as a “living tree,” situated next to the greenery of Meiji Jingu, and covered with a façade consisting of wood from all 47 prefectures.

For Kuma, the nature of wood has its origins in familiarity and adaptability, but it also exemplifies a flexible material optimal for refreshing experimentation. Speaking of Shimpuhkan, Kuma said:

“We used wood in areas that are close to the people [users], creating a space that offers an innovative experience of the material.”

Time to Discover Our Own Place: The Urban and the Rural

As evident in Kuma’s designs, the carefully calculated placement of chosen materials situates us closer to the comfort of nature.

Along with continuing to emphasize material, Kuma points to a broader theme in need of discussion. It is one that is surfacing through personally experiencing urban life amid the ongoing pandemic.

“Generally, before corona, the urban skyscraper of the metropolis was the center of society. And in places like that, intellect was gathered. It was thought that in those places, work can be done most efficiently.”

“However,” he paused before continuing, “that was actually an environment that caused a lot of stress for people.”

Kuma describes the pre-corona urban city composed of “boxes” towering upon each other, an essentially unnatural environment for humans. “Relating to the site” was not fostered or as a matter of fact, not required in order to inhabit it.

“After corona, we have entered a period where the role of architecture must consider how the place and humans can be connected. Contrary to the closed architecture of the past, a new form needs to be sought after,” said Kuma.

With the pandemic igniting greater attention towards remote work and communication technology, options for how we relate to our spaces have indeed opened up. The growing interest in mobilizing and anchoring urban careers into rural or suburban areas is one such ripple effect.

This brings up the question of how metropolises will need to find new roles and meanings. Moreover, how will relationships between the urban and the rural evolve as we reorient ourselves into the shifting relationships? Kuma commented with the following:

“After corona, I think a period has come where people will choose their ‘place,’ a place that matches them individually for work and living. In that way, the role of architecture that connects humans to their ‘place’ will also start changing.”

In many ways, this outlook is extremely freeing. Less emphasis is spotlighted on the shared value of urban centers, making each of us free to explore new sites and redefine where we fit in. But at the same time, this may be a daunting feat. We are individually encouraged to step out of the possibly unfit, but comfortable-enough spaces previously highly valued by society. What awaits our discovery may be untamed, but also drastically refreshing.

But Where To Next?

The question remains. If looking for our own place may not necessarily be limited to the urban centers, where can we look?

In this process, Kuma has brought attention to the satoyama of Japan. Though definitions are layered, satoyama broadly refers to managed woodlands near villages. According to Kuma, satoyama offers more than simply being the traditional rural landscape it often refers to.

“Satoyama is not just a forest,” Kuma emphasized, “but it is distinct because it is part of a human being’s biosystem. All kinds of materials for buildings and furniture come from the satoyama. When gas and electric companies weren’t around, satoyama provided fuel, and without it, cooking food and boiling water wasn’t possible. Satoyama used to be infrastructure itself.”

The satoyama may be a promising environment for those in search of a new anchor outside of the metropolis. But even if physically relocating is not on our radar, what can be learned from satoyama is abundant.

Kuma mentions that lifestyles modeled by the satoyama bind people directly to their environment. They function for the inhabitants by supporting them and providing necessities like home-grown produce. The interconnected relationships to the place create conscious dependency, something that is absent in the “boxed” life of an urban center.

Reflecting back, Kuma said, “Nature and people helping each other to live is what has continued to create Japanese culture. From there, I think that respect for nature and omoiyari (thoughtfulness) was produced.”

For many of us, the ongoing pandemic most likely reveals that boxed rooms in skyscrapers urge efficiency only to some degree. As I’ve experienced first-hand, architecture that recalls connections to an abundant forest with lush, airy delicateness, proves much more effective on many levels.

Kuma concluded his thoughts saying, “Within the long history of humanity and architecture, we have continued forward, focusing along on one single vector. But now we must go on a new vector that is the opposite, creating a need for thinking about architecture completely differently. I think we are all present in a really interesting time period.”

Perhaps a worthwhile starting point for all of us facing the misty horizon of post-corona is to dissect, reconsider, and shift the ties to “our place” and the natural environment that it entails.

Note: Excerpts of the interview discussed here have been translated and edited for clarity and length.

RELATED: [Bookmark] After the Crisis, People Will Return to Renewed Cities