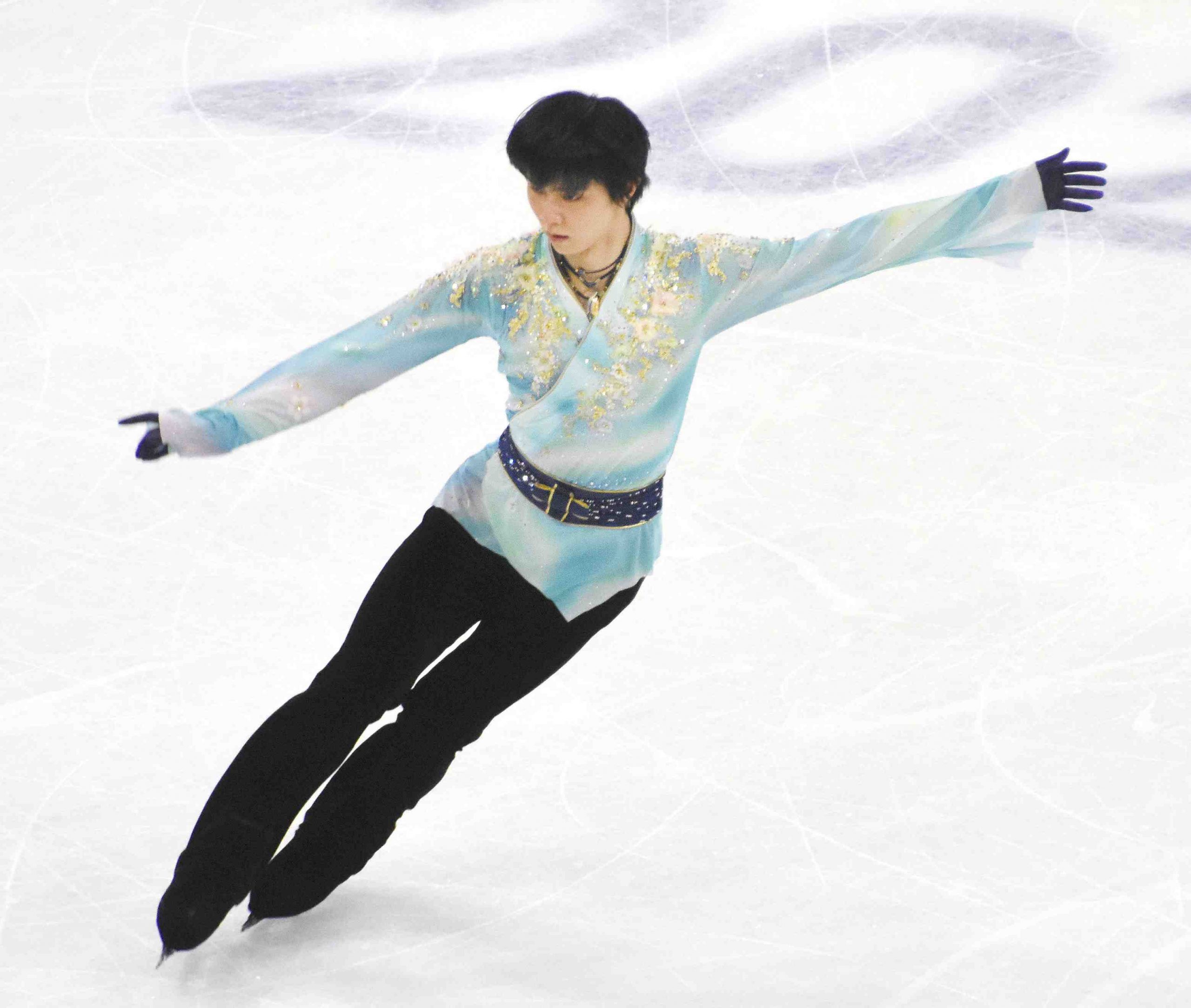 After a strong short program and with an eight-point lead over American rival Nathan Chen, it looked like everything was lining up just right for Yuzuru Hanyu to win his third world title and head into the Olympic season with momentum on Saturday, March 27 in Stockholm.

But that’s not what happened.

The two-time Olympic champion struggled with his jumps in his free skate to “Heaven and Earth” and tumbled from first place down to third behind compatriot Yuma Kagiyama in the final standings. Though many fans are disappointed with the result, Ice Time thinks this was a temporary setback in what is a most unusual season.

Following the free skate, Hanyu attributed his performance in part to fatigue from overtraining in his goal to become the first skater to land a quadruple axel in competition.

The next day he said he suffered an asthma attack after the free skate.

It appears it was a combination of issues that prevented him from being at his best when he needed to be.

The simple fact is, however, that if Yuzu had skated like he did at the Japan Championships in Nagano in December, he would have won the competition. Even with Nathan’s incredible performance in the free skate, Hanyu would have been on top of the podium.


Hanyu’s short program to “Let Me Entertain You” was strong and resonated with the experts.

“Wow. That’s why he is the double Olympic champion and the world record holder for the short program. Just amazing,” stated ISU announcer Mark Hanretty on the global telecast of the worlds. “What is all the more admirable is that he continues to produce this level of quality season upon season. He delivered an epic performance.”

Tara Lipinski, the 1998 Olympic women’s champion, noted just how special of a skater Hanyu is.

“It is just such a privilege to watch him skate and compete,” Lipinski commented on the NBC telecast. “He’s not a once-in-a-generation talent, he’s once-in-a-discipline talent. When will you see someone like Yuzuru come around again? He is so special.”

“This triple axel was so stunning,” Lipinski remarked. “Look at that deep knee bend, control over the edge. Difficult entry, exit — he’s got it all.”

Lipinski’s fellow NBC analyst Johnny Weir, a longtime fan of Hanyu’s skating, had no problem with Yuzu’s skating in the short program, but worried about its content.

“I spoke with Yuzuru’s choreographer Jeffrey Buttle yesterday about this short program and Jeff said that he originally suggested a classic piece for the short program this season, but Yuzuru wanted to do a gift for his fans,” Weir reported.

“Everyone has been through so much, and he wanted something upbeat that they could clap along to and he delivered in this short program.”

Weir worried that the music in Hanyu’s short program could be problematic.

“I think this [program] leaves him a touch vulnerable artistically and that is where his strength really lies,” added Weir.

It is uncertain at this point what Hanyu’s short program will be for the Olympic season, but the bet here is that he will have something that will give him the best shot at victory in Beijing.

Hanyu could not pinpoint the reason for his struggles in the free skate.

“It was very exhausting and it was like I was losing my balance one by one, but I tried to make sure that I don’t fall, so I did work hard to make sure I kept it together,” Hanyu noted. “I realized that there were a lot of jumps one after another that were not clean.

“I don’t know when the next competition might be, but I just want to go back to practice, to train on my quad axel and continue to work to land it, so that I can use it in a real competition,” Hanyu continued. “Overall, I wasn’t feeling that bad. And in the practice, it wasn’t that bad either. But all of a sudden going into my program, my balance started to crumble.”


Yuma Sparkles on the Big Stage

The real revelation of the worlds was Yuma Kagiyama. The silver medalist’s athleticism and smoothness on the ice impressed observers and showed his great potential for the future.

“He was really strong in practice this morning and continued that confident approach here in the competition. Showing no signs of vulnerability or hesitation. I’m sure his father [Masakazu] and coach will be beyond proud of him.”

“Super tight in the air on the quad salchow and good flow out on the triple toe (loop),” Hanretty commented. “Not only is he technically so proficient, but the component scores and the presentation mark deserve to be really high as well.”

Hanretty believes that Kagiyama will be the one to carry the torch for Japan’s male skaters after Hanyu.

“At some point, I dare to say it out loud, Hanyu will retire from the competitive ranks and Yuma looks like he could successfully take over the helm of Japanese men’s figure skating,” Hanretty said.

“Well done, Yuma Kagiyama. Admirably coping with the responsibility of coming into this in second place in his first worlds,” Hanretty commented. “One of the youngsters of this event, and showcasing absolute brilliance.”

“To be honest, I was really surprised how well I did after my performance,” Kagiyama remarked. “So, of course, as for the outcome, I’m very happy. And being here, I wanted to make sure I landed on the podium. That’s what I’ve trained for. And I guess my work has paid off.

“Of course, I couldn’t put out everything I wanted out there on the ice here in Stockholm,” Kagiyama said. “Having said that, I’m really happy with the results that I received.”

Shoma Uno moved up from sixth after the short program to finish fourth behind Kagiyama and Hanyu.

Hanretty felt that the jumps at the start of Uno’s short program to “Dancing On My Own” required the Pyeongchang Olympic silver medalist to get out of sync with the music.

“A unique choice of music. For me, [it was] just a little difficult to interpret that level of energy at the start,” Hanretty stated. “Obviously Shoma’s focus was on nailing the quad flip and the quad toe [loop], so he had to somewhat detach a little bit from the music at the start of the program. But he came back strong at the end of the step sequence.”

Kagiyama, Hanyu and Uno finishing second, third and fourth in Sweden was impressive and reflects just how much of a force Japan’s men continue to be in the sport.

With Kihira in second place behind eventual winner Anna Shcherbakova of Russia after the short program, she looked like a lock to be on the podium. But struggles at practice on Friday morning caused Kihira to change her plans and abandon a quad salchow in her free skate in favor of two triple axels.

That plan went off the rails after Kihira’s first jumps in her free skate to “Baby, God Bless You.” She doubled her first planned triple axel, then fell on her second one and her skate went downhill from there.

Kihira blamed fatigue in part for her showing in the free skate, saying she had trouble adjusting to the timing of the competition. The women’s free skate was held on Wednesday afternoon in Sweden, while the free skate took place on Friday night.

Kihira’s short program to “The Fire Within” garnered plaudits from Lipinski and Weir.

“So much strength in her skating, but it’s refined in this graceful, beautiful way,” Lipinski commented.

Weir was effusive in his praise of the 18-year-old Kihira.

“That performance was dynamic, and there was a freedom to it that I’ve never seen from her before,” Weir said. “She’s been at the top of her game for a few years now, and she didn’t come out of nowhere. We all knew she was coming.

“She had to be age-eligible, and then the triple axel had to work,” Weir added. “She had to find her legs competitively and at times it was almost like she was getting in her own way.”

Sakamoto was the unsung hero for Japan. Her sixth-place finish saved the day after Kihira unexpected drop in the final results.

“She’s such a fighter this girl,” Eurosport’s Chris Howarth stated after Sakamoto’s free skate to “The Matrix.” “Another program choreographed by Benoit Richaud. I think she could have probably given the choreography a little bit more, but she couldn’t have given the jumps anymore. That’s for sure.”

World Team Trophy Up Next

The season will conclude with the World Team Trophy in Osaka (April 15-18) at the Municipal Central Gymnasium.

This will be the first truly international skating event held in Japan since the pandemic began last year.

South Korea’s You Young participated in the NHK Trophy in Osaka in November, but she was the lone skater representing a foreign country entered.

Six countries (Japan, Russia, United States, Canada, France, Italy) will compete in the team competition that is held here every two years. This will mark the seventh edition of the World Team Trophy. The U.S. has won it four times, including in 2019 in Fukuoka, with Japan taking the title twice.

The countries are expected to confirm their teams for the event this week.