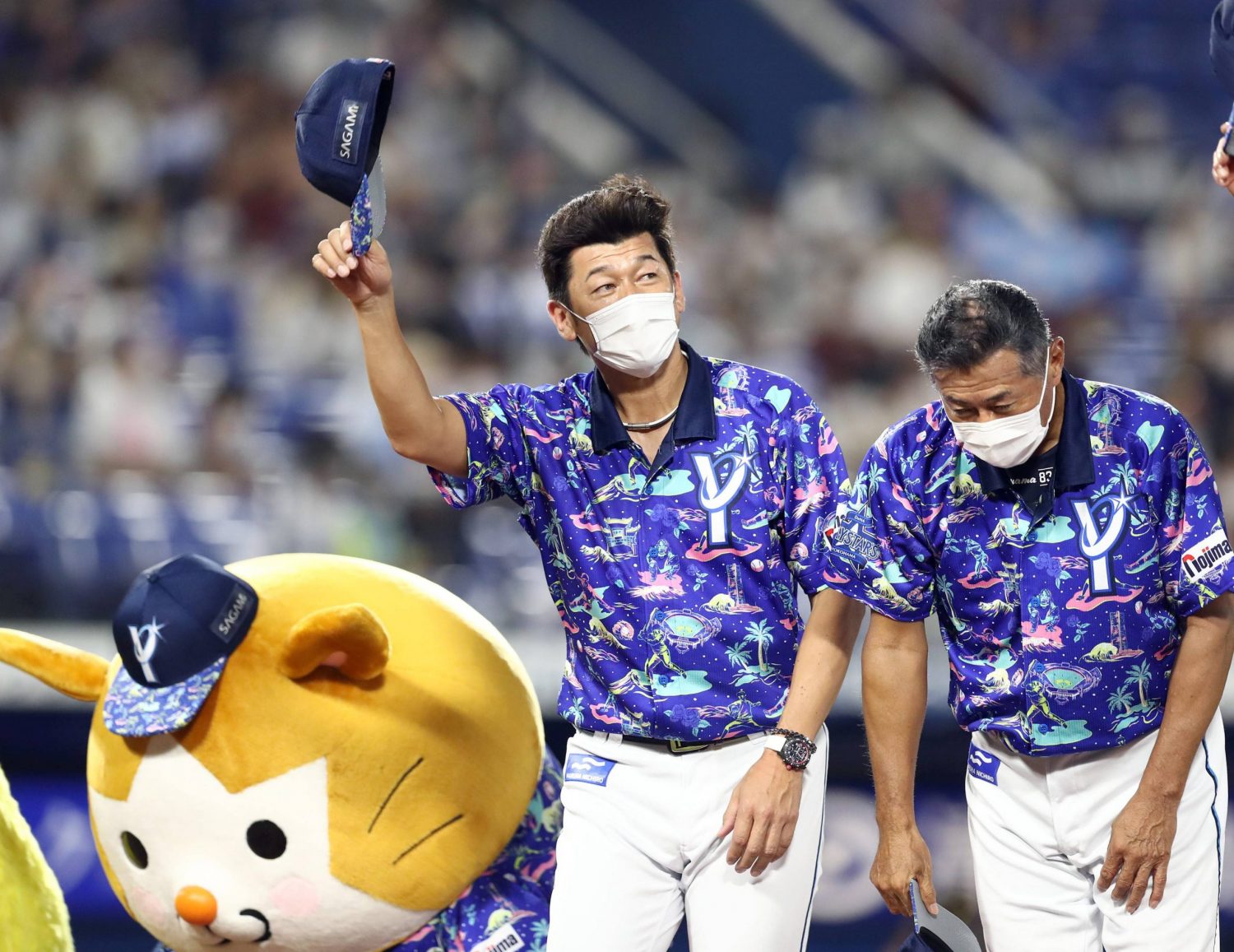 Yokohama DeNA BayStars manager Daisuke Miura salutes the team's fans after a 3-2 victory over the Hanshin Tigers at Yokohama Stadium on August 9. (ⒸSANKEI)

Much to the delight of their loyal fans, the Yokohama DeNA BayStars have played their way into contention for the Central League pennant after a lackluster start to the season.

The BayStars opened their weekend series with an 8-3 drubbing of the Hiroshima Carp on Friday, August 19 at Yokohama Stadium. It was Yokohama’s team-record 15th straight win at home.

A day earlier, the BayStars beat the Yomiuri Giants 4-3 to move within just six games of the front-running Tokyo Yakult Swallows. (Statistics reported below are through games of August 18.)

It’s an impressive turnaround for a team that earlier in the season was in fifth place and 17½ games off the pace.

Fans of the BayStars are referring to the team’s sudden resurgence as “Shin Bancho Yakyu” in reference to the team’s beloved manager and former pitcher Daisuke Miura, who is also known as “Hama No Bancho” (Boss of Yokohama).


Keita Sano was the hero in Thursday’s game, hitting a tie-breaking solo homer in the eighth as the BayStars completed a three-game sweep of the Giants.

“I got a good swing on it and knew it was gone the second I hit it,” said Sano, who also had a solo homer in the fourth inning.

The current home winning streak stretches all the way back to June 28 when the BayStars beat the Hanshin Tigers 6-2 in the first game of a three-game sweep.

“Everyone is contributing and this is exactly the style of baseball that I envisioned us playing,” Miura said.

The BayStars finished last in the CL standings in 2021, 20 games behind the Japan Series champion Swallows. Expectations weren’t high this season but the team has delighted their fans with this late-season run that has them contending.

The NPB record for home wins is 19 consecutive decisions set by the 1965 Nankai Hawks and equalled by the 1980 Hiroshima Carp. Yokohama’s previous home winning streak was 11.

The BayStars also cooled off the Swallows, handing the Tokyo-based team its seventh straight loss on Friday, August 12 with a 4-3 win at Jingu Stadium. It was Yokohama’s eighth win in nine games.

Another red-hot team is the Orix Buffaloes. The 2021 Pacific League champions started out slow this season but have caught fire of late.

The win allowed Orix to move one game behind the second place Hawks in the PL standings.

Biddle (4-4) gave up two hits but no runs while striking out five over five complete innings in Fukuoka. Orix batters helped him out by scoring seven runs in the fourth and three in the fifth for a 10-0 lead.

“Pitching is a lot easier when you have a 10-run lead and great defense behind you,” Biddle told Kyodo News. “I just trusted my teammates to get the job done.”

The well-traveled 196-cm lefty played for four MLB teams before landing in Japan this season. In 2018, he started his pro career with the Atlanta Braves, who were also his team in 2021. In between there were stints with the Seattle Mariners, Texas Rangers and Cincinnati Reds.

The first-place Saitama Seibu Lions continue to impress in the PL.

His first career homer came on July 24, 2004, against the Kintetsu Buffaloes at Seibu Dome.


The Lions are also getting solid pitching as one might expect of a first-place team.

In addition to Takahashi, Kaito Yoza has a 9-3 record while Tatsushi Masuda has 23 saves, which is tied for third in the PL.

Yakult slugger Munetaka Murakami continues to run away from the field on the CL’s home run leaderboard.

Murakami belted his league-leading 42nd homer of the season on Wednesday, August 17. That’s 19 more than Yomiuri’s Kazuma Okamoto, who is in second place.

In Wednesday’s 4-2 win over Hanshin at Jingu Stadium, Murakami connected off starter Masashi Itoh with a towering three-run blast in the third inning as the Swallows handed the Tigers their eighth-straight loss.

Playing in just his fifth professional season, Murakami is four homers away from reaching 150 career dingers.

He is also challenging for the Triple Crown this season. It’s pretty safe to say the 22-year-old native of Kumamoto Prefecture will win the home run title. He’s also first in RBIs with 104, well ahead of his nearest rival Yusuke Ohyama of Hanshin (71).

And with a .320 batting average he is battling with Yokohama’s Sano (.322) and Chunichi’s Yohei Ohshima (.321) for the lead in that category.

The Hanshin Tigers put an end to their eight-game losing skid on Thursday, August 18 with a 10-2 drubbing of the Swallows.

Mel Rojas Jr. connected for a three-run, third inning homer at Jingu Stadium to lead the Tigers, who now find themselves in fourth place in the standings, a half-game back of the third-place Hiroshima Carp.

Fumihito Haraguchi made it 4-0 in the fourth with his first homer of the season. In the fifth inning, the Swallows cut the lead to 4-2 on Jose Osuna’s two-run double, but Hanshin scored five runs in the seventh to put the game out of reach.

“We had a lot of timely hits in today’s game,” Hanshin manager Akihiro Yano said. “We are the type of team that needs strong performances from our pitchers. We will aim to move up the standings in the remaining games.”