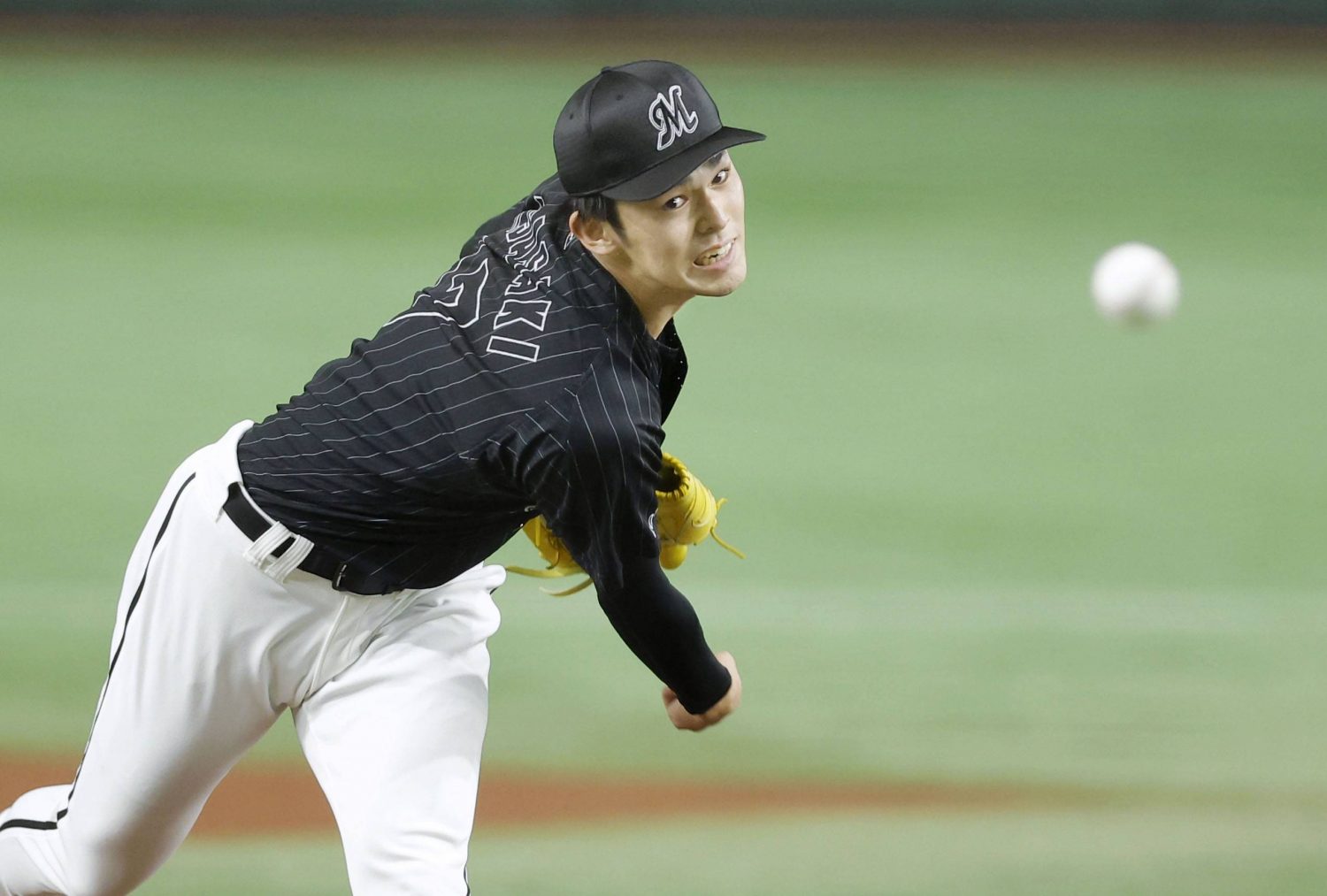 In one of the most highly anticipated showdowns in Japanese baseball’s interleague season, talented pitcher Roki Sasaki of the Chiba Lotte Marines was roughed up by the Yomiuri Giants on Friday, June 3.

Kazuma Okamoto hit a two-run shot for his Central League-leading 16th home run off Sasaki in the third inning at Tokyo Dome to give the hosts a 3-0 lead.

“I went into the batter’s box with the mindset of being aggressive,” Okamoto said after the game.

Yomiuri added runs in the fourth and fifth to send Sasaki (5-1) to an early shower. The hard-throwing right-hander left the game having given up five runs on eight hits and a walk, while striking out six over five innings.

Sasaki shot to fame on both sides of the Pacific when the hard-throwing right-hander became the 16th NPB pitcher and youngest ever to throw a perfect game on Sunday, April 10 against the Orix Buffaloes.

In that game, he struck out a record 13 straight batters and tied a Japan record with 19 total strikeouts.

As if that wasn’t enough, Sasaki almost achieved the same feat a week later when he retired all 24 batters he faced against the Hokkaido Nipponham Fighters before being taken out after eight innings.

A Closer Look at Interleague Play

Elsewhere in interleague play, so far it’s been a case of the strong getting stronger.

The Fukuoka SoftBank Hawks, a perennial powerhouse, moved into first place in both the Pacific League and the interleague standings with a 6-3 win over the Giants on Wednesday, June 1.

It also happened to be the 5,500th win in the history of the franchise.

None other than Japanese home run king and former SoftBank manager Sadaharu Oh and SoftBank CEO Masayoshi Son were on hand at Tokyo Dome a day earlier as the Hawks kicked off a three-game set with the Giants.

The Hawks, who took two out of three against Yomiuri, have the Giants’ number.

In addition to the strong results this season, it wasn’t too long ago that the Hawks swept the Giants 4-0 in both the 2019 and 2020 editions of the Japan Series.

The defending Japan Series champion Tokyo Yakult Swallows have also thrived in interleague play going 7-3 through June 3 and are tied with SoftBank for the interleague lead.

At the other end of the spectrum, the Hiroshima Carp are not enjoying the interleague games so far. They were last in the standings with a 3-7 record.

One team that has turned their fortunes around in interleague play is the Hanshin Tigers.

That’s surprising as the Tigers were off to a miserable start to the season but have gone 6-4 so far against Pacific League opponents, widely considered stronger than CL teams.

Their recent success included a 6-1 win against the Saitama Seibu Lions on June 2 in which starter Joe Gunkel not only got the win but went 3-for-3 at the plate with an RBI.

The 27-year-old native of Mexico has a proven track record as one of the most successful closers in recent years.

Over six seasons in the majors with the Toronto Blue Jays and Houston Astros, Osuna has 155 saves.

The hard-throwing right-hander last played for the Astros in 2020 and was placed on waivers at the end of the season.

He played in the Mexican League in 2021.

Osuna is a talented closer but comes with baggage.

In 2018, Osuna was arrested by Toronto police and charged with assault. He allegedly assaulted his girlfriend, the mother of his 3-year-old son. Osuna was a fan favorite in Toronto before the arrest.

But he was placed on administrative leave by MLB Commissioner Rob Manfred and later received a 75-game suspension without pay for violating the league’s domestic violence policy.

While he could be a valuable asset to the Marines or any team in Japan, one wonders if the baggage he carries is worth it.

Orix reliever Yoshihisa Hirano recorded his 200th career save on Thursday, June 2 when he retired the side in the ninth to nail down a 3-1 win over the Yokohama DeNA BayStars.

It was his 15th save of the season which is tops in the Pacific League. Hirano became the seventh pitcher in NPB history to record 200 saves.

Hirano, who began his career as a starter, has been with the Buffaloes since 2006. His best season as a reliever came in 2014 when he had 40 saves.

Hirano also spent three seasons in Major League Baseball; two with the Arizona Diamondbacks in 2018 and 2019 and one with Seattle in 2020.

Former NPB Commissioner Katsuhiko Kumazaki passed away at the age of 80 on May 13.

Kumazaki became the 13th NPB commissioner in 2014 and was regarded as a key figure in the return of baseball at the Tokyo 2020 Olympics where Japan won the gold medal.

“I am extremely saddened to learn of the passing of former NPB Commissioner Katsuhiko Kumazaki,” WBSC President Riccardo Fraccari said in a statement. “He was a great leader, colleague and friend who helped lift international baseball and the WBSC to where they are today.”