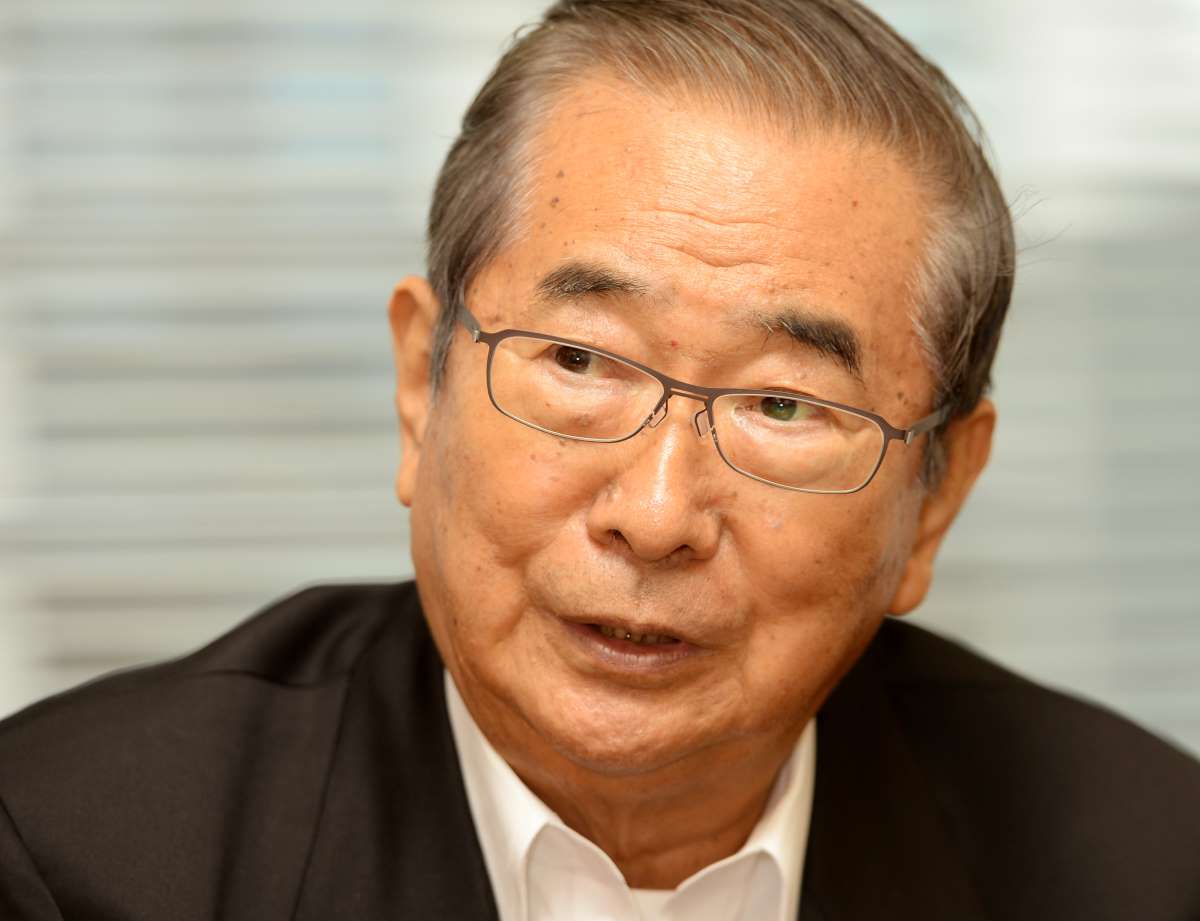 Shintaro Ishihara in an interview with The Sankei Shimbun in September 2013, while he was a member of the Lower House of the Japanese Diet. (Photo by Minoru Oyama)

In 1963, Ishihara wrote an article about a sumo wrestling match that he had just watched. It was a decisive bout between two grand champions on the last day of the tournament. Ishihara’s contention was that it had been fixed. “You’ve got to be kidding,” he sneered in print.

Cue outrage from the Sumo Association and the fans of the wrestlers, one of whom was Taiho, an all-time great of the sport. A criminal complaint was lodged against Ishihara and the newspaper, who were forced to apologize, their chances of winning in court being close to zero.

Half a century later, he was vindicated when a police investigation uncovered large-scale match-rigging, leading to the cancellation of a tournament, the expulsion of 23 wrestlers from the sport and lurid headlines about drug use and gangland connections.

Ishihara, then in his last year as Governor of Tokyo, enjoyed the moment. “Sumo has always been like that,” he declared in a press conference. “The idea that it represents the essence of Japan’s traditional culture is laughable.”

Ishihara could be insensitive, stubborn, prejudiced and downright rude, as with his sexist comments about the current Governor of Tokyo, Yuriko Koike. As an unapologetic nationalist, he took strong positions on divisive topics such as the comfort women and Yasukuni Shrine. Those who agreed with him admired his outspokenness; those who didn’t, including many foreign observers, were shocked.

The fact that the people of Tokyo, a relatively liberal city, elected him as governor four times in a row suggests that “culture war” issues have limited importance to large swathes of the electorate.

That was the case with sumo wrestling. And it may turn out to be true about a much bigger subject, relations with the People’s Republic of China.

In 1973, Ishihara set up a cross-factional pressure group of 31 parliamentarians, giving it the poetical name of “Seirankai” (“Blue Storm Society''). With characteristic dramatic flair, he had the members sign a blood oath, following in the steps of Ryoma Sakamoto, a hero of the mid-nineteenth century, ladies of the Yoshiwara pleasure quarters and other non-mainstream groups.

Japanese political factions are based on patronage and personal connections, not ideology. But the largest presence was from the Fukuda faction, with none from the Tanaka faction. That was necessarily the case since Tanaka had just negotiated the normalization of relations with Communist China and the consequent severing of ties with Taiwan. Ishihara and the Blue Stormers were bitterly opposed to this move.

Of course, Japan was simply mirroring the United States, as most of the Western bloc did. In the context of the Cold War, it seemed that President Nixon and his advisor Henry Kissinger had pulled off a brilliant geopolitical coup by splintering the already fraying relationship between China and the Soviet Union. The sacrifice of Taiwan, peremptorily expelled from the United Nations, seemed well worth it. Anyone who disagreed was surely on the wrong side of history.

Now, many decades after the end of the Cold War, the verdict of history seems a lot less clear. China has been controlled by the Chinese Communist Party for longer than the Soviet Union existed, and reputable studies have revealed the severe economic and social damage done to the US by Chinese trade policies.

Ahead of His Time

Ishihara was sometimes considered “anti-Chinese” - an impression not helped by some ill-judged off-the-cuff remarks. And he was always a strong supporter of Taiwan, which he visited many times.

He respected traditional Chinese culture. It was authoritarian modern China that he detested. In 2008, he likened the Beijing Olympics to the Berlin Olympics of 1936.

The media labelled Blue Storm a far right group, given its emphasis on constitutional reform and patriotic education, but it also included some pragmatists like Michio Watanabe and Taku Yamasaki. With the benefit of time, some of its positions seem much less radical. In the pacifism-dominated intellectual atmosphere of the 1970s, the proposal that the Japanese Self-Defense Forces should take part in United Nations peacekeeping operations was beyond the pale. Now it seems unexceptional.

Blue Storm faded when Takeo Fukuda became Prime Minister and, as commercial realism dictated, went along with Tanaka’s policy of improving relations with Beijing. Ishihara remained close to the Fukuda faction – today in the hands of Japan’s most powerful politician, Shinzo Abe. But he was too much of a maverick to belong to any faction himself.

What Would Johnny Depp Say?

How successful a politician was Shintaro Ishihara? That depends how you define political success. He was certainly a huge presence for half a century and chalked up a stellar record of electoral victories.

Ishihara won election to Japan’s national parliament ten times, once for the less important Upper House and nine times for the Lower House.

Additionally, he won four elections for the Governorship of Tokyo, which has a bigger economy than Holland.

His public loved him, but his fellow politicians were less impressed. He was awarded just two cabinet posts, each lasting a year -  Minister of the Environment under Fukuda and Minister of Transportation under Noboru Takeshita in 1988.

In 1989, Ishihara stood for leadership of the ruling Liberal Democratic Party, which would have automatically made him prime minister. Instead, he was thrashed by the bland Toshiki Kaifu, securing just 11% of the vote.

The problem was already obvious when Ishihara was Minister of the Environment in 1977. At the time, the LDP was prioritizing the pollution issue which was threatening to discredit Japan’s high growth economic model. The worst pollution scandal concerned Minamata disease, recently the subject of a pretty good Johnny Depp movie, “Minamata”.

Rather than pouring oil on troubled water, Ishihara inflamed the situation by suggesting that some of the compensation claims were bogus.

In fact, he may have been right - one claimant was Shoko Asahara, later to found the psychopathic Aum cult – but that wasn’t the point. The government needed to make the problem go away, which was both the right thing to do and the smart thing to do. Cavilling about who should get how much money was terrible politics.

Forced to make amends, Ishihara travelled to the Minamata area and performed “dogeza” – bowing in a kneeling position, forehead touching the ground – before the mother of a severely handicapped girl.

There was to be no job for him in Fukuda’s second cabinet.

Provocateurs have an important place in the political ecosystem, but not at the center of policy-making, where compromise and quid-pro-quo deals are often necessary. Gadflies like US  Senators Bernie Sanders and Ron Paul exist on the fringes, which is why people listen to them.

Ishihara seemed more comfortable as Governor of Tokyo. With one important exception, his room for causing serious trouble was circumscribed.

Despite indulging in his trademark verbal outrages from time to time, he ran the city in a pragmatic way. I for one was happy to see the mass cull of jungle crows that he initiated.

These huge scavengers, their glossy feathers testifying to the gourmet diet they obtained from Tokyo’s high-protein trash, had become apex predators. They cawed derisively at people going to work, dive-bombed babies in prams and damaged diversity by outcompeting smaller birds. The city was better with much fewer of them.

The one piece of serious mischief that Ishihara managed during his stint as governor proved to be the most consequential of all his provocations.

Concerning the ownership of the Senkaku Islands, known in China as the Diaoyu chain, it led to a sudden and severe breakdown of relations between Japan and China and changed Japanese attitudes towards its huge neighbor permanently.

The islands are very small and have been uninhabited since 1940. In the preceding forty years, a community of a few hundred Japanese had lived there, eking out a living from guano, dried bonito flakes and albatross eggs and feathers. It was only after oil was discovered under the seabed in 1970 that China pressed its claim.

In 2012, the now defunct Democratic Party of Japan was in power with the hapless Yoshihiko Noda serving as prime minister. In China, Xi Jinping had yet to take over as Maximum Leader. Already, though, there had been a number of small-scale clashes around the Senkaku Islands between the Japanese Coast Guard and Chinese fishing boats.

The DPJ government sought to defuse the situation, and even cover the incidents up. The most powerful political figure in the DPJ, the man who had turned a party of oddballs and dreamers into an election-winning force, was the strongly pro-China Ichiro Ozawa, a former protégé of Kakuei Tanaka.

Brilliantly, Ishihara identified the lever that would destroy the DPJ, put paid to Ozawa’s reputation as a political puppet-master and tear off China’s mask of benign trading partner, revealing the ruthless would-be hegemon underneath.

The key point was that the Senkaku Isles were not Japanese government property, but for historical reasons belonged to a Japanese family. Ishihara offered to buy the islands in the name of the Tokyo Metropolitan government. The owners accepted.

Panicked by the possibility that Ishihara might build structures there, which would be certain to antagonize China, the Noda government stepped in with a higher bid and nationalized the islands.

If Noda thought that would solve the problem, he was horribly mistaken. The nationalization seemed to enrage the Chinese even more.

Ishihara could not have hoped for a better outcome. Japan’s pro-China business lobby was totally discredited, and public sentiment grew increasingly hostile.

At the time, that was an unusual phenomenon. Now many other countries have nearly caught up.

Ishihara defies attempts to categorize him. At one point he was following ministry guidelines in sanctioning  teachers who refused to have the national anthem sung at school ceremonies. At another, he was declaring how much he disliked the lyrics, with their overtones of selfless devotion to the country. Instead, he said, he preferred to fit words of his own invention when required to sing it, much to the surprise of whoever was standing next to him.

As a judge for the Akutagawa literary prize in the mid-1990s, he championed some controversial works, including a story about a high-school teacher having gay liaison with a pupil. Yet a few years later he was criticizing the number of gay performers on TV variety shows. Consistency was never his strength.

Adventurer, trend-maker, script-writer, serious literary novelist, polemicist, geopolitical prankster and enemy of crows -  he was one of a kind. For better or for worse, we shall not look on his like again.