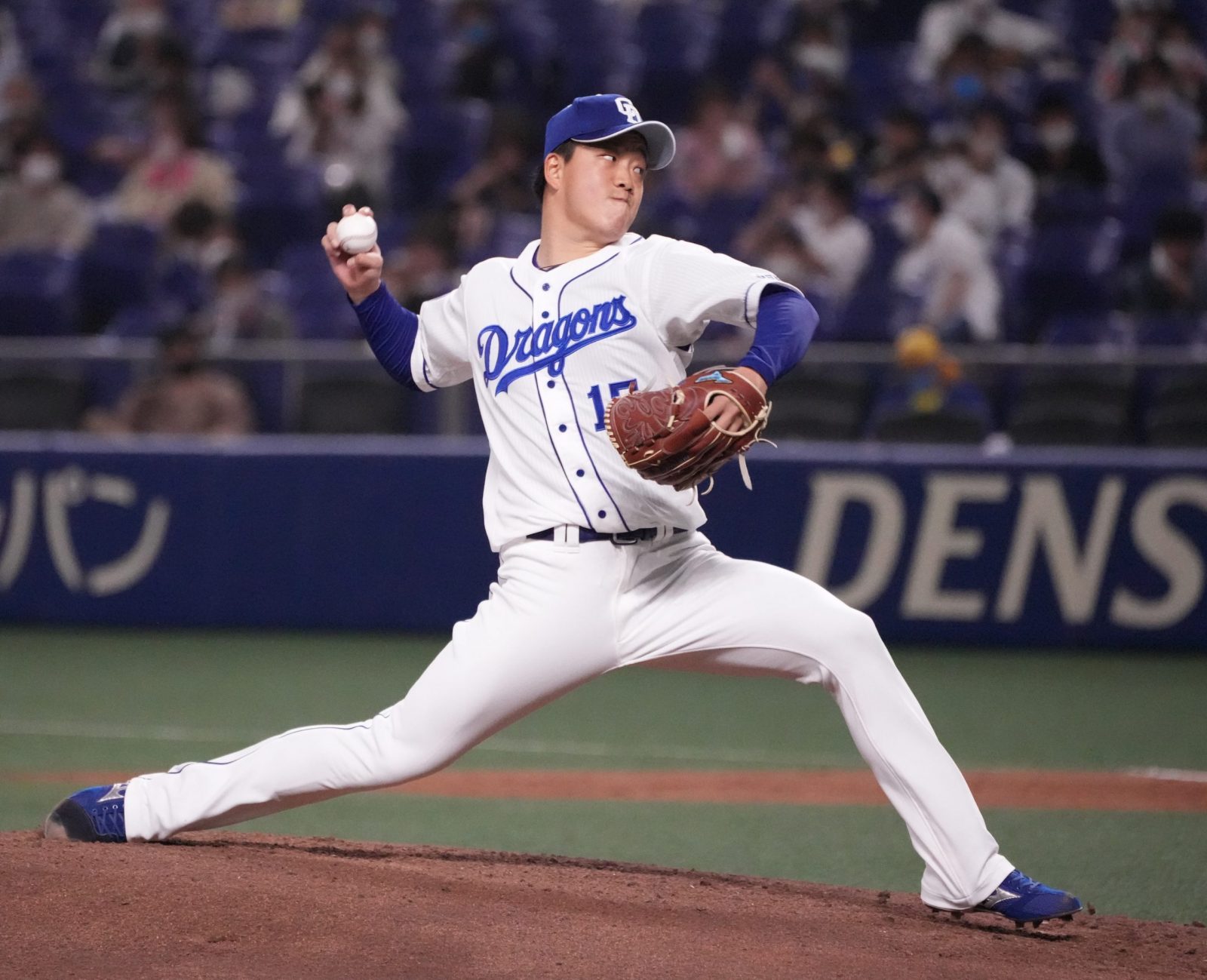 Entering his most recent start, Chunichi Dragons pitcher Yuya Yanagi had 24 wins and 24 losses in his Nippon Professional Baseball career. Nothing extraordinary about those numbers.

And then the fifth-year pro went out and pitched the best game of his pro career on Tuesday, June 1. He tossed a one-hitter against the Chiba Lotte Marines, winning his fifth consecutive decision and raising his record to 5-1 this season.

In the Dragons’ 1-0 interleague victory, Yanagi only allowed No. 4 hitter Dayan Viciedo’s single to left field in the sixth inning. He walked one and struck out eight, pitching effectively from start to finish. He flashed a big smile after the final out was recorded.

In recording his second career shutout, the Miyazaki Prefecture native blanked the opposition for an entire game for the first time since 2018. In addition to throwing a potent fastball, he exhibited command of his other pitches, including a sharp breaking ball, and changed speeds seamlessly.

The right-hander leads NPB with a 1.41 ERA, a revealing measurement of how well he’s pitched this year.

In 70 innings, Yanagi has given up 40 hits, including just four home runs. He has thrown strikes consistently, as evidenced by his 12 walks and 81 strikeouts (also No. 1 in NPB) entering the fourth month of the season.

“I’m always pumped up, I was in good shape in the bullpen and had confidence,” Yanagi was quoted as saying by Kyodo News after his brilliant outing against the Marines.

Confidence certainly can’t hurt the 27-year-old on the mound.

After all, self-doubt can be one of the biggest stumbling blocks for athletes.

As the baseball season marches closer to the midway point, it’s a good time to point out that Yanagi’s ERA represents one of the most notable feats of the current campaign.

Hiroshima Carp pitcher Masato Morishita is No. 2 in the CL with a 1.84 ERA. The Marines’ Ayumu Ishikawa has the lowest ERA among Pacific League starters (2.16).

There’s still a lot of baseball to play in 2021, and there are no guarantees, of course, that Yanagi can maintain his sensational level of pitching.

But there are plenty of positive signs.

For instance, his earned-run average is much lower right now than it ever was at the end of his previous four seasons.

Yanagi is looking ahead to upcoming games and wants to maintain his current form.

“I need to make sure [the good ERA] is not just for this period,” Yanagi commented after his one-hitter, according to Kyodo News. “I was happy to get the applause from the fans as I went up to the mound for the ninth inning.”

When you do it often enough, you raise your profile. Fans and media pay more attention to your pitching appearances.

In recent weeks, Yanagi has occupied a higher spot on this observer’s short list of players to keep tabs on.

The Dragons enjoyed a strong seven-inning effort from Yanagi against Sugano on April 30 at Tokyo Dome. He held the hosts to four hits and a pair of runs while fanning nine batters and issuing three free passes in a 3-2 Dragons victory.

Sugano, who also worked seven innings, was tagged for three runs on eight hits. He also hit a batter and struck out six.

For Yanagi, the opportunity to compete against the famous Giants starter was in the back of his mind for days. For him, it was a big deal ー the perfect combination of anticipation and motivation, too.

“I knew for a week I was going to go up against Sugano, and I used that as motivation as I prepared,” Yanagi was quoted as saying by Kyodo News after walking off the mound as the winning pitcher. “I walked a few batters early in the game, but I was able to pitch carefully and eventually find my rhythm.”

Rhythm is a key component of a pitcher’s success. If your delivery lacks any semblance of consistency, you’ll probably have trouble throwing strikes. Yanagi isn’t having that problem in 2021.

Rhythm also affects the tempo of a pitcher’s work, so the importance of having a good rhythm can’t be overstated.

Ten games is a decent sample size to take note of Yanagi’s performance at the start of this season.

That said, his next 10 mound appearances will provide some answers about the following:

Can he continue to have the best season ー by far ー of his career?

Has he arrived as a bona-fide pro pitching star?

It’s going to be intriguing to follow how the 2019 NPB All-Star performs over the next several weeks.

Look for Yanagi to provide a few clues along the way.